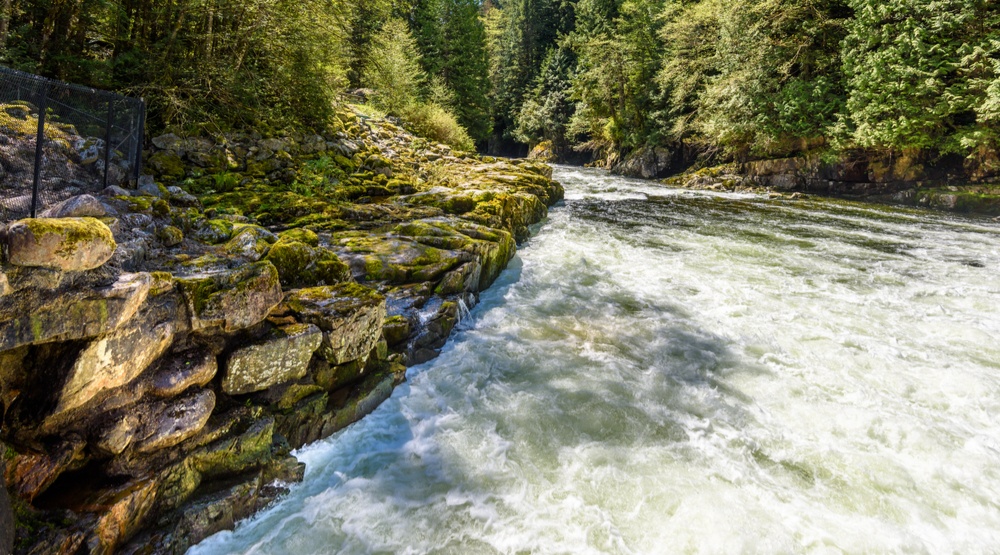 Stock image of the Capilano River in North Vancouver (karamysh/Shutterstock)

A fisherman was rescued Thursday night after getting stuck on an island in the fast-flowing Capilano River in North Vancouver.

“That’s a very common spot for fishing on the Capilano River. He’d made his way down there earlier in the day when the water levels were not as high,” he said.

“But he found himself stranded on the island as the water levels progressively rose and the speed with which the river was running increased as well.”

A passerby heard the fisherman’s calls for help and dialled 9-1-1, said Hutchinson. When crews arrived at the scene, they found the man stranded on a small island mid-river.

“The water levels and the force with which the water was moving made traversing across to the patient extremely challenging,” said Hutchinson.

Rescuers had to conduct a technical rope rescue, dropping down from the Highway 1 overpass above that section of the Capilano River.

Incident on the Capilano river, concluded. Patient was medically assessed, and transferred to BC ambulance. Patient is in good condition.

After being hoisted back up onto the overpass, the man was “a little shaken up” but otherwise uninjured, and just appreciative of all the rescuers’ efforts, Hutchinson said.

“This gentleman did make a good decision,” said Hutchinson. “Once he found he was in a precarious spot, he stayed put, called for help and waited for assistance to come.

“Should he have tried to cross the river, I think the situation could have turned out quite different.”

The man, who Hutchinson said was in his 40s or 50s, was taken into the care of the BC Ambulance service at the scene. The whole thing was all over by 9:20 pm.

“Our members are highly skilled in swift water rescue, technical rope rescue, because we do this on a regular basis,” he said.

In 2016, the team conducted 80 technical rescues, in areas like Lynn Canyon, the Capilano River, the Seymour River, and Quarry Rock.

To anyone thinking of taking a dip in the North Shore waters, Hutchinson has this advice.

“We also recommend to just be aware of the water levels,” said Hutchinson. “Be aware when you’re in any of our rivers, and waterways on the North Shore.

“The water’s extremely cold, it can be moving very rapidly.”