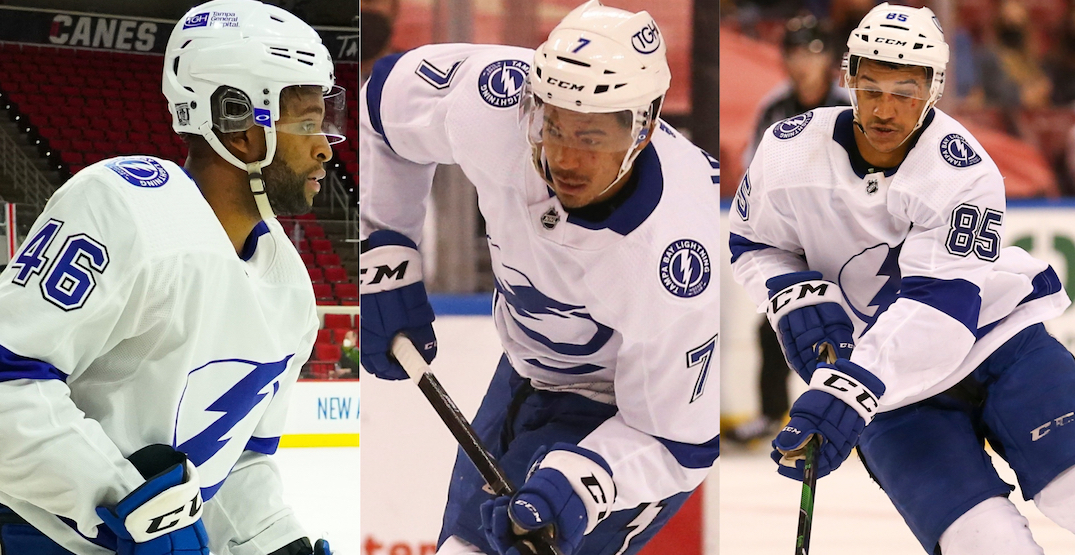 History was made on Monday night in South Florida.

Three Black players lined up at forward to start the game for the Tampa Bay Lightning, the first time that has happened in NHL history. Mathieu Joseph, Gemel Smith, and Daniel Walcott didn’t just start the game together either, as Lightning head coach Jon Cooper kept the trio together for the entire night.

The three players are all close off the ice, Cooper said, and they started the game in part because it was Walcott’s first NHL game. While Cooper said he hopes that one day this sort of thing won’t be a story because it is commonplace, the significance of the moment wasn’t lost on anyone.

“I thought it was great. It’s a step in the right direction,” Joseph told reporters after the game. “Obviously you’ve got to thank the coaching staff for that. It was their call… It was great to see and I’m glad I was part of it.”

“Any players of colour in this league, obviously you want to showcase our sport to our families or other people of colour… It’s definitely awesome to be one of the guys who was there for that.”

Both Joseph and and Walcott pointed to the importance of this moment for kids watching at home, with each of them saying that Jarome Iginla was a player they idolized growing up.

“It’s awesome to promote this for the young kids out there, young minorities,” said Walcott. “I know growing up seeing Jarome Iginla wear the C for Calgary was an inspiration and I always looked up to him and tried to be a great leader on and off the ice. I just hope I can have that same effect on people… It was a great moment for sure.”

When asked about the decision to play the Joseph, Walcott, and Smith together, Cooper first pointed to their ability as hockey players.

“First of all, they’re all in the NHL for a reason. They deserve to be here, they’ve worked their tails off to get here,” he said.

“As we move forward here as a league, you hope that this isn’t a story. Maybe it’s a story today, but as the league gets more diverse, you hope it’s not going to be a story anymore and it’s just going to be the norm that it’s a league for everybody… I think it was a pretty cool moment for all those guys.”