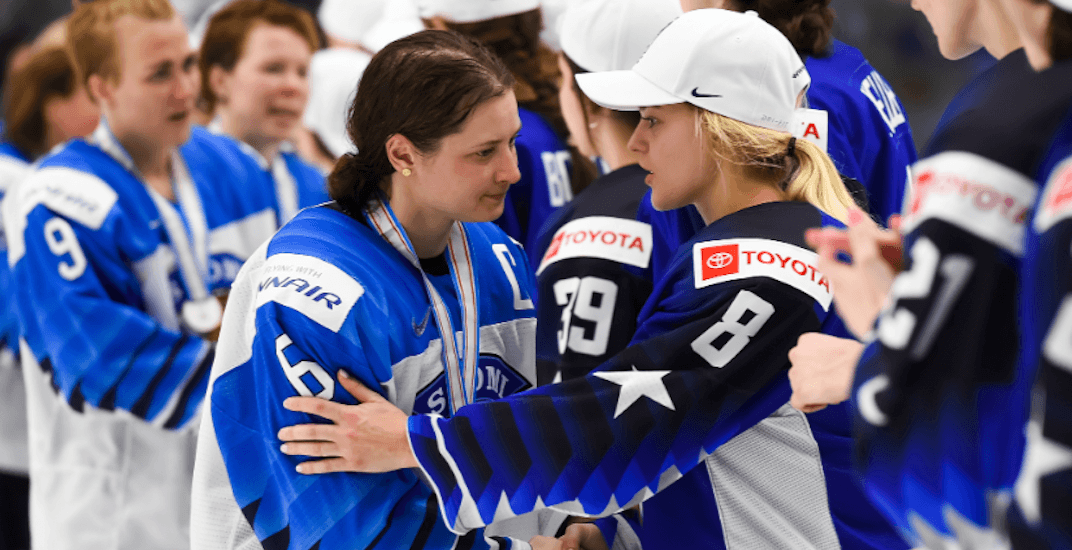 The 2019 IIHF Women’s World Hockey Championship was a tournament like no other.

For the first time since the inaugural tournament in 1990, the gold medal game didn’t feature the United States versus Canada, as host Finland pulled off a miracle upset in the semi-finals. The Canadians had to settle for bronze.

Finland would need a second, bigger miracle on ice in the gold medal game against USA on Sunday, and they came agonizingly close to doing so.

After exchanging goals in the second period, the game went to overtime at 1-1. With 8:28 left in overtime, Finland’s Petra Nieminen appeared to score the golden goal. Nieminen was mobbed by her teammates on the ice and the hometown fans in Espoo fans went wild.

This was like the 1980 Miracle on Ice, except it was even more improbable. Beating Canada and the United States in back-to-back games had never been done before. It would be like the 1980 team beating the Soviet Union twice.

Then video replay called the goal back.

Jenni Hiirikoski made contact with goaltender Alex Rigsby, causing the American netminder to be pulled away from her net. The contact happened outside of the goal crease and Rigsby lunged into Hiirikoski’s lane, making it a difficult call to make.

After a lengthy review, it was ruled no goal, and the game continued. Team USA ended up winning in a shootout, giving them a fifth-straight World Championship gold medal.

Many people in the hockey world disagreed with the no-goal call in overtime, including Canadian hockey legend Hayley Wickenheiser.

The IIHF issued a statement on Monday to explain their decision, referencing the following two rules:

“Taking these two rules into consideration, the IIHF Video Goal Judge Operations determined that the goal must be disallowed,” read the statement. “During the play, the on-ice official called a penalty for tripping on the USA goaltender. Penalties that are assessed on-ice are not reviewable by the Video Goal Judge. The VGJ cannot assess or cancel a penalty. The decision to uphold the penalty was made by the on-ice official.”

Well, as tears are rolling down my face, I never thought I will play my last hockey game in a World Championship final in Finland. To be honest I don't even care what happened, our team was golden and I will always remember it. Our effort went well beyond the color of the medal❤

As difficult as the loss must have been, Finland must be incredibly proud of their performance. This was Finland’s first appearance in a gold medal game after capturing bronze on 12 occasions.