Most of us watch films so we can escape reality. But how often do we actually consider the awesome power of film? Can a film make us view our immediate surroundings in a new light? The Mark Lewis exhibit at the Vancouver Art Gallery’s offsite exhibition space asks (and answers) this question, and in the process will give you a new perspective on Vancouver.

The exhibit consists of eight different short films, with one film playing on loop the entire day. Each of the films has something to say about this city. On the day this writer went the film that was playing was set in a narrow corridor.

We see two men sitting in it, silent throughout, and you cannot tell whether it is ascending or descending. Eventually the movement stops, and when one of the sides slides open you see an urban environment. The two men exit into this environment and disappear. And now for the million dollar question: how is this relevant to Vancouver?

The answer: it is a commentary on Vancouver’s increasing density. As you stand in front of the exhibit and look upwards you realize you are in the heart of a dense urban jungle, with modern skyscrapers polluting the sky. The narrow corridor in the video represents our densely populated city, but what about the two silent men? What does their silence represent?

I believe Lewis is arguing that this density has caused us to become closer to one another in the sense of physical proximity, but not in the sense of emotional bonding. We are surrounded by people at almost all times, yet we do not bond with the vast majority of them.

This density is doing nothing to strengthen our sense of community – in fact, it may actually be causing greater alienation. If this is something that you want to ponder then I highly suggest checking out this exhibit. You will view this city in a whole new light. 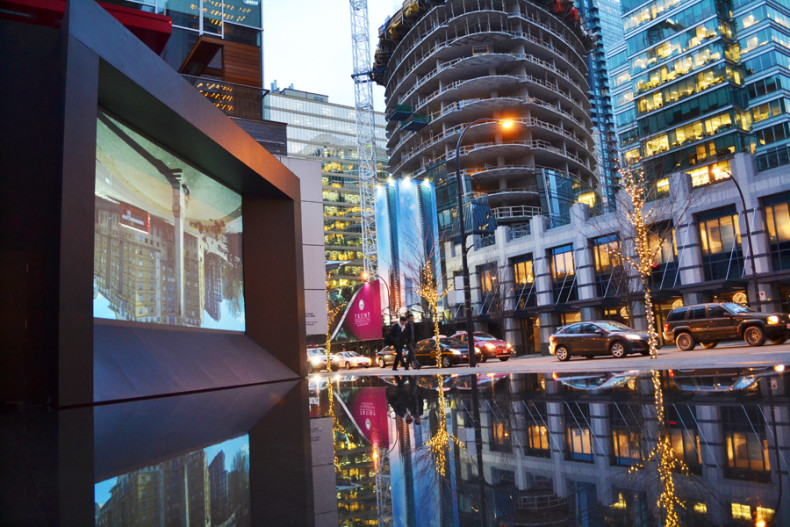