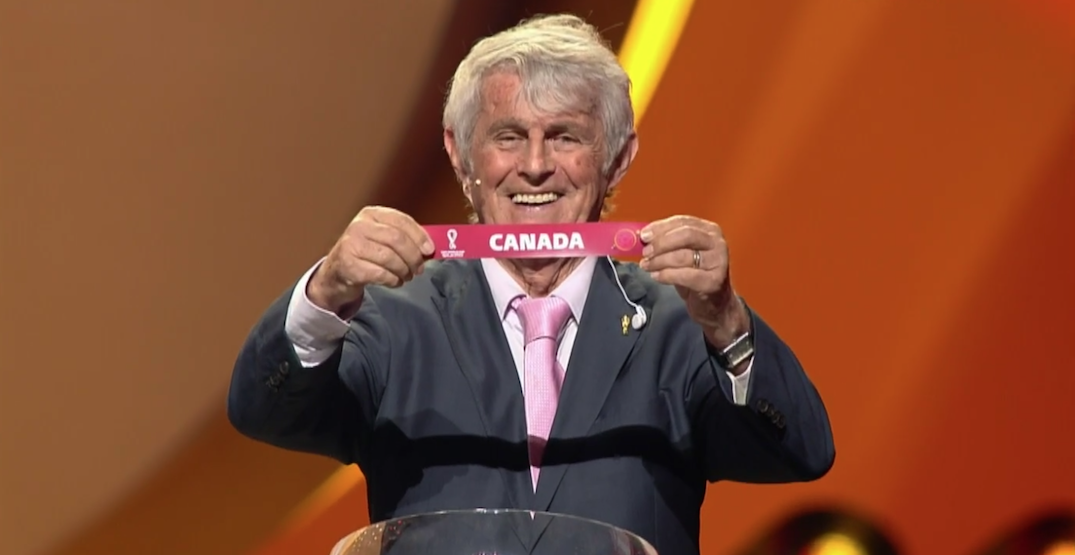 FIFA sure made us wait, but we now know who Canada will play at the World Cup in Qatar.

The final country announced at the FIFA World Cup draw today, Canada will play in Group F, with matches against Belgium, Morocco, and Croatia.

As the No. 2 ranked country in the world, Belgium is the most difficult opponent in the group for the 38th-ranked Canadians. They lost in the semi-finals four years ago in Russia.

Croatia is currently ranked 16th in the world, and were a surprise World Cup finalist in 2018.

The World Cup will begin in November for the first time ever due to Qatar’s hot climate. It begins on November 21, and wraps up December 18.

A total of 32 countries will compete, although three countries have yet to qualify — they’ll book their tickets to Qatar following inter-continental and European playoffs in June.

The top two teams in each group advance to the knockout round.

The most favourable group Canada could have been drawn in was Group A, with the host country Qatar (ranked 51st), along with the Netherlands (10th) and Senegal (20th). It could have been much worse though, notably in Group E, where getting out of the group would mean finishing higher than Spain or Germany.

There’s not a clear “group of death” this year.

According to the FIFA rankings, the group of death is Group B, which includes England (5th), USA (15th), Iran (21st), and the European playoff winner (Wales, Scotland, or Ukraine). Many people would disagree with that sentiment though, instead pointing to Group E, with Spain (7th), Germany (12th), Japan (23rd), and the winner of Costa Rica/New Zealand.

You could also make a case for Group D being the group of death, particularly if Peru (22nd) wins its inter-continental playoff. They would be with France (3rd), Denmark (11th), and Tunisia (35th).