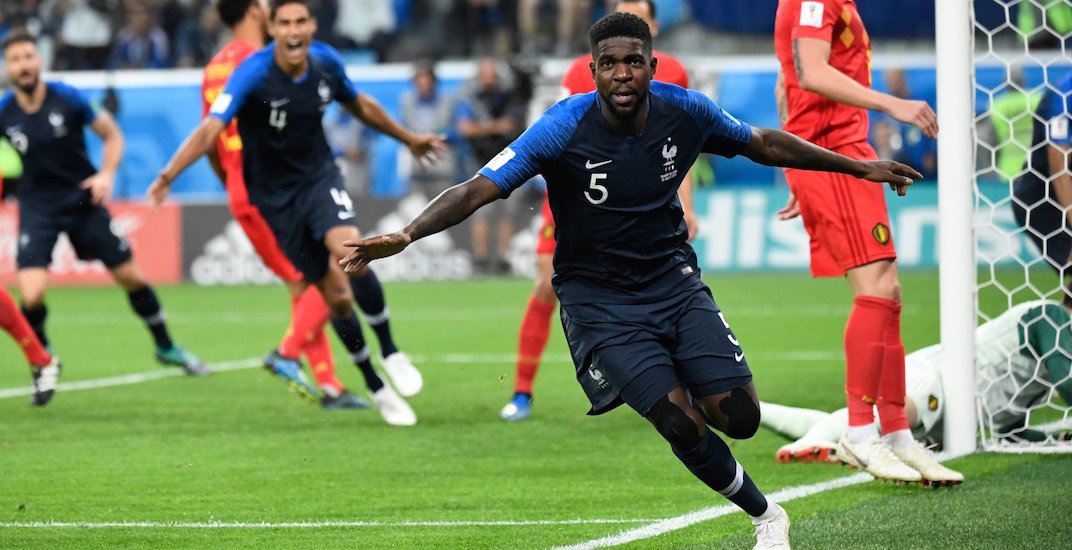 The World Cup is now France’s to lose.

For the third time in their history, France will play for the FIFA World Cup, as they punched their ticket to the final with a 1-0 win over Belgium on Tuesday.

Samuel Umtiti was the hero, scoring on a header in the 51st minute for the only goal of the match.

GOOOOOOOOOOAAAAAAAALLLLL!!!!!!#FRA takes the lead as Umtiti soars over Fellaini to SMASH a header home! #WorldCup pic.twitter.com/0GJFXidBiJ

Belgium held 60% of possession, including some furious pressure early on in the match.

Hazard is FEELIN' IT at the moment…#FRA's Varane makes a CRUCIAL deflection #WorldCup pic.twitter.com/ggtgj1IaBK

France got better as the match wore on, ending with 19-9 advantage in attempts at goal.

But the real story was France stifling Belgium’s attack. The Red Devils had 14 goals through five games in the tournament coming into the semi-final, but they couldn’t beat French goalkeeper Hugo Lloris. It was France’s fourth clean sheet of the tournament.

This has to be a bitter pill for Belgian supporters to swallow, as this was the best chance they’ve ever had to win a World Cup. With their golden generation of stars shining all at once, they’ve come agonizingly close to reaching the first World Cup final in their country’s history.

France, on the other hand, are into the final for the first time since 2006. Their only World Cup triumph came in 1998.

We’ll find out who France’s opponent will be on Wednesday, as England and Croatia battle for the right to face them. Regardless of who wins, France will be considered a heavy favourite.

Turns out it isn't just England fans who love throwing beer around when their team score. 🍺🍺
Check out the scenes in Paris for that France goal! #FRABEL pic.twitter.com/o8Bsr3oO4g

The scenes in Lille when France scored the goal that sent them through to the #WorldCup final 😳 pic.twitter.com/KH1D101mg1

France football fans take to the streets for a long night of partying in front of the Arc de Triomphe #FRA #WorldCup pic.twitter.com/eQacdMzhkn