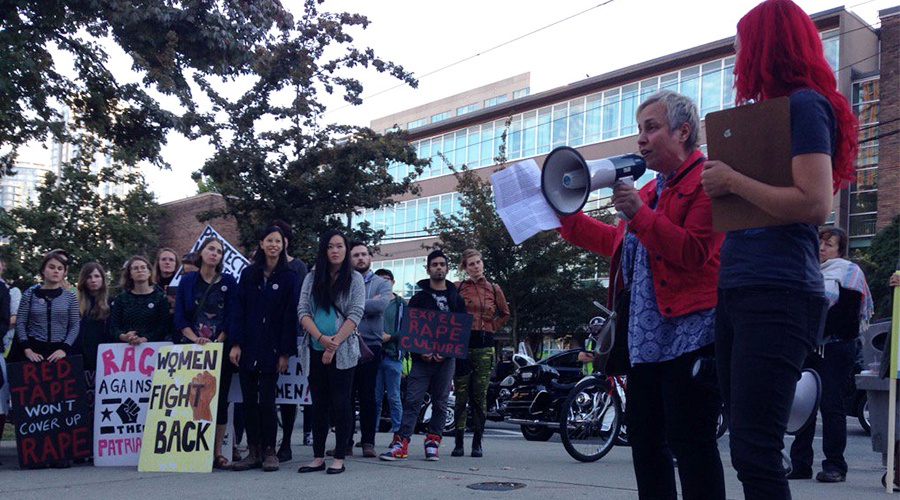 It’s been three years since the controversy over a pro-rape song sung by UBC students during frosh week, but critics say that those on campus haven’t done enough to end what they call a rape culture.

That was the message at a march in downtown Vancouver to launch Feminist Frosh Week promising to “Take Back the Campus.”

Spokesperson Ariana Barer is an education outreach coordinator at the Women Against Violence Against Women Rape Crisis Centre and she says the leadership at colleges and universities needs to do more.

“We can change out attitudes, we can change our behaviours, and that requires addressing the issue from a level of leadership, and everyone doing their part.”

One speaker at the rally called for universities to take sexual assault as seriously as they take plagiarism.

Barer says that the government has mandated changes for campus sex assault policies, but it’s only just a start.

“But that needs to be accompanied with a change in the rape culture on campus and that’s the idea that sexualized violence is inevitable, and of course it is not.”

Speaker slams post secondary institutions for being tougher on plagiarism than sexual assault on campus pic.twitter.com/Hs7E4U5uJs

“Sexualized violence is incredibly common – WAVAW received over 4,000 calls on our crisis line last year and many of them and many of those are from campuses.”

Until new legislation kicks in next year, BC’s campuses are not legally required to have policies for sexual misconduct.

Marchers joined by bloke who described himself as a men’s rights activist. “They’re here’s a lot” organiser tells me pic.twitter.com/D8RLlSLlbd