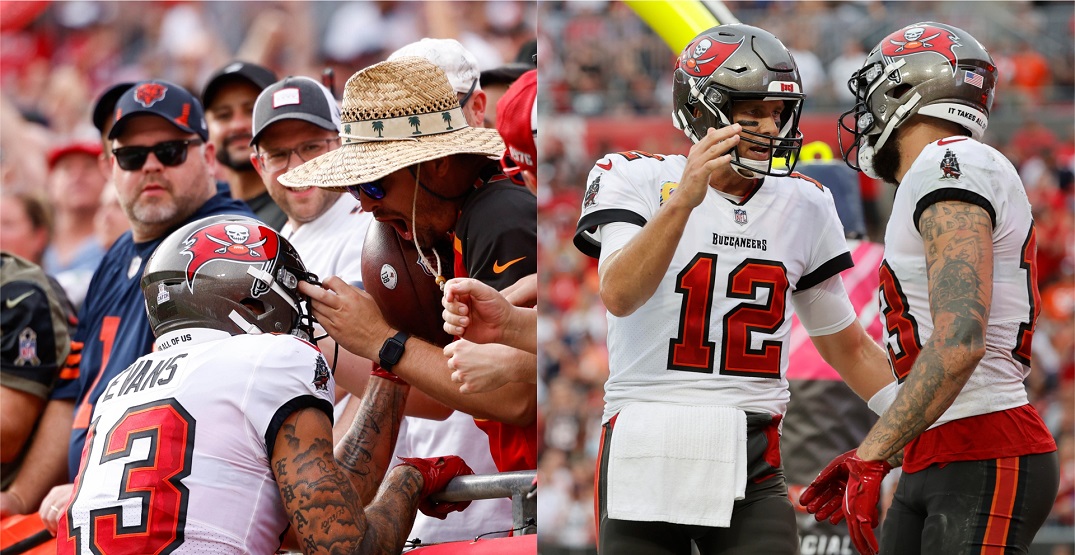 It was another ho-hum performance for the defending Super Bowl champions, who dominated the Chicago Bears by a 38-3 score. Brady threw for 283 yards and four touchdown passes, including the milestone in the closing stages of the first quarter.

It seems like Brady sets a new record every week these days.

But teammate Mike Evans, who caught the 600th TD pass from Tom Brady, didn’t realize the significance of the ball and gave it away to a fan.

A Bucs staff member embarrassingly had to go and beg for the ball back, which Goldin Auctions founder Ken Goldin estimates would have a value of about $500,000 (USD).

Fan gets Tom Brady’s 600th TD ball after Mike Evans handed it to him not realizing what it was.

The Bucs staff came over to ask for it back and fan complied.

Just spoke with @KenGoldin of @GoldinAuctions. Said the ball is worth $500,000 at minimum.

Reporter Darren Rovell updated his initial report on Monday, saying that the fan would receive a pair of signed jerseys and a helmet from Tom Brady, a signed jersey as well as game cleats from Mike Evans, $1000 in team store credit, as well as season tickets for the remainder of the season (as well as next year). Not a bad deal at all.

JUST IN: The deal has been made with the Bucs fan who gave up the Brady ball.

2 signed jerseys + a helmet from Tom.

A $1K credit at the Bucs team store.

2 season tickets for the remainder of this season + next

Whatever ends up happening, we’re sure to find out more soon enough.

During the final moments of the game, Brady had a smoother interaction with a fan. Brady spotted a young child who’d credited him with their cancer recovery and gifted the survivor his hat from the game.

At age 44 and in his 22nd NFL season, Brady shows no signs of slowing down as he chases his eighth Super Bowl win. After Sunday’s victory, his Buccaneers sit atop the NFC South with a 6-1 record.