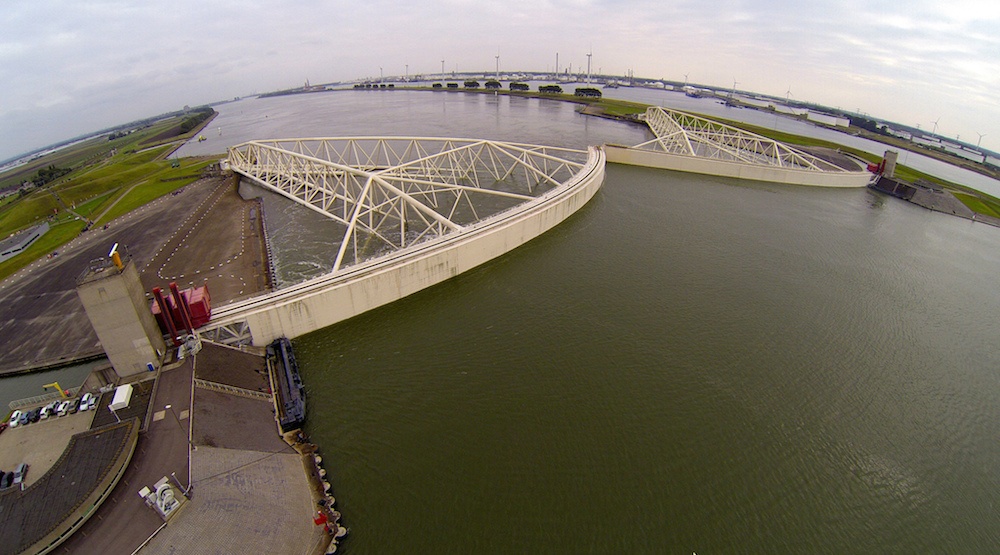 As low-lying areas by the water are prone to flooding from rising sea levels, the City of Vancouver is considering a number of options to protect vulnerable areas and this includes a storm surge barrier, or a sea gate, to protect False Creek and the False Creek Flats – an area stretching all the way to Clark Drive.

Yesterday, a proposal presented to City Council by City staff included an option construct a sea gate under the Burrard Street Bridge. The 10-metre-tall, 360-metre-wide gate at the mouth of False Creek could be closed for three to four days a year, increasing over time as water levels rise.

A storm surge barrier would be built under the Burrard Street Bridge: 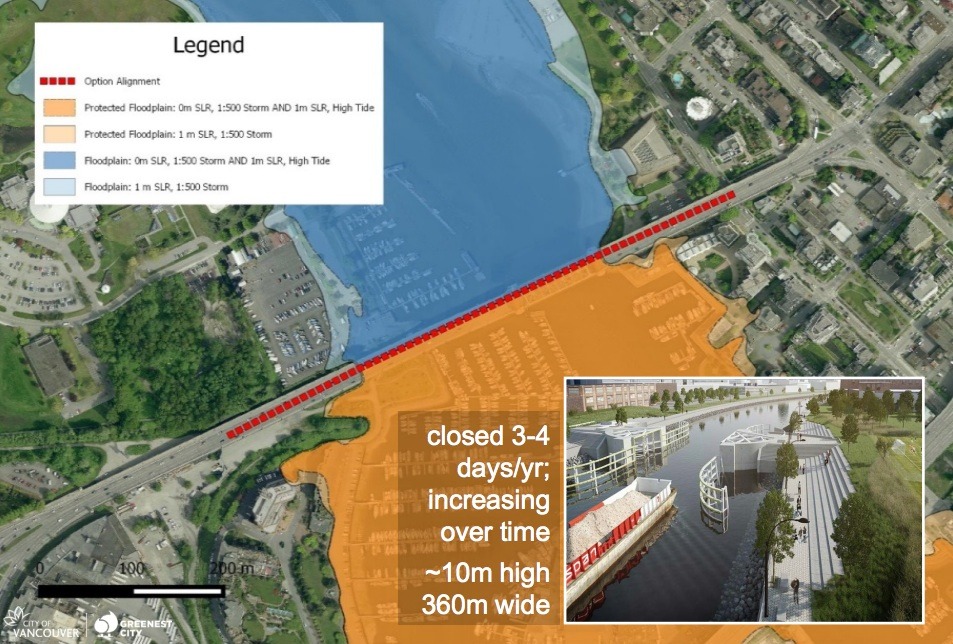 While a sea gate would protect billions of dollars worth of property and infrastructure in the inner harbour, it has an estimated construction cost of between $500 million and $800 million and an annual maintenance cost of $9.5 million.

Similarly in other seaside cities or areas threatened by climate change, sea gates have been built or proposed. City staff cited a storm surge barrier in Ramspol in the Netherlands as an example, but the Dutch are best known for Oosterscheldekering – a three-kilometre-long system of seaside dams and storm barriers to prevent flooding from the North Sea.

London has its Thames Barrier, which protects the floodplains in the British capital region from being flooded from high tides and storm surges from the North Sea as well.

An $8-billion sea gate project in Venice, Italy will reach completion by the end of the decade, and there have been calls from some experts to build a sea gate at the narrowest point of New York Harbour.

Sea level rise could cause widespread flooding in the False Creek area: 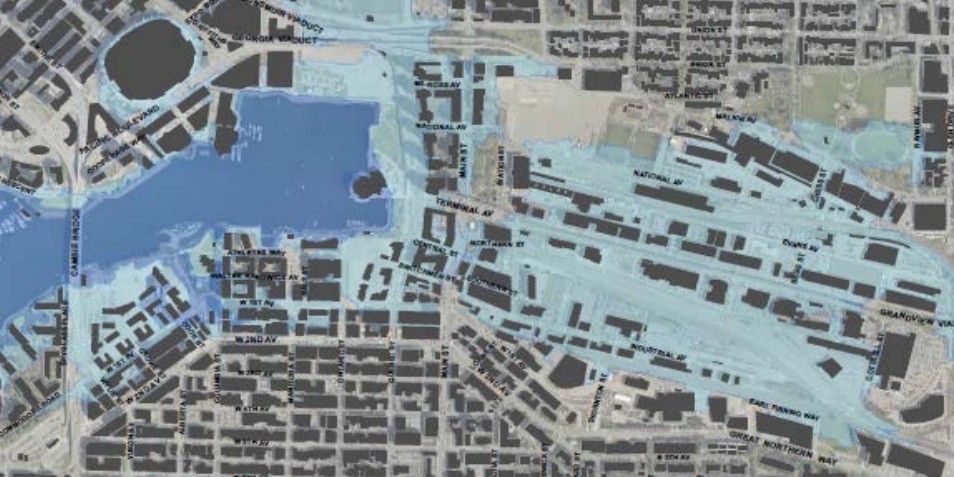 Other options to protect False Creek include raising the seawall over an 8.6-kilometre-long stretch by an average height of 2.3 metres. This will cost between $300 million and $400 million to build and $4 million annually to maintain.

Another alternative to ‘adapt’ would, for example, consists of constructing deployable flood shields and temporary stairs in city streets, remodelling ground floor windows to be flood proof, and converting any residential space on the ground level into commercial. Entrances into building could even have their own flood gate.

The adaptation option has an estimated construction cost of $338 million and an annual maintenance cost of $500,000.

“Based on today’s projections of sea level rise, we have timelines of when we need to start prioritizing different areas and incorporating that lag time into construction time an decision making,”Senior Sustainability Specialist Tamsin Mills told Council. “When the nuisance flooding becomes intolerable and the fine line, we tip over to wanting that piece of infrastructure.”

Measures to protect other low-lying areas in the city will cost considerably less.

For example, a shoreline dike on the Fraser River from the Arthur Laing Bridge to River District could cost $160 million and a dike for Kitsilano Beach and Vanier Park could cost up to $5 million.

Further west along Jericho Beach and Locarno Beach, which is currently protected by a wall of sandbags during high king tides, a park dike is pegged at between $10 million and $24 million.

However, the need for such flood-preventative infrastructure investments is not expected for decades. Officials estimate sea levels will rise by one metre by the end of the century and two metres by 2200.

A study released earlier this year by the Fraser Basin Council stated a major flood from a surge in fresh water river waters in the Fraser River could cost up to nearly $33 billion while a coastal flood could cost $24.7 million.

In March, the provincial government announced that it would provide Richmond with $16.6 million towards the costs of a $25-million flood mitigation project involving rebuilding four pump stations and raising the height of a two-kilometre-long dike fronting the river.

Areas prone to coastal flooding across the City of Vancouver: