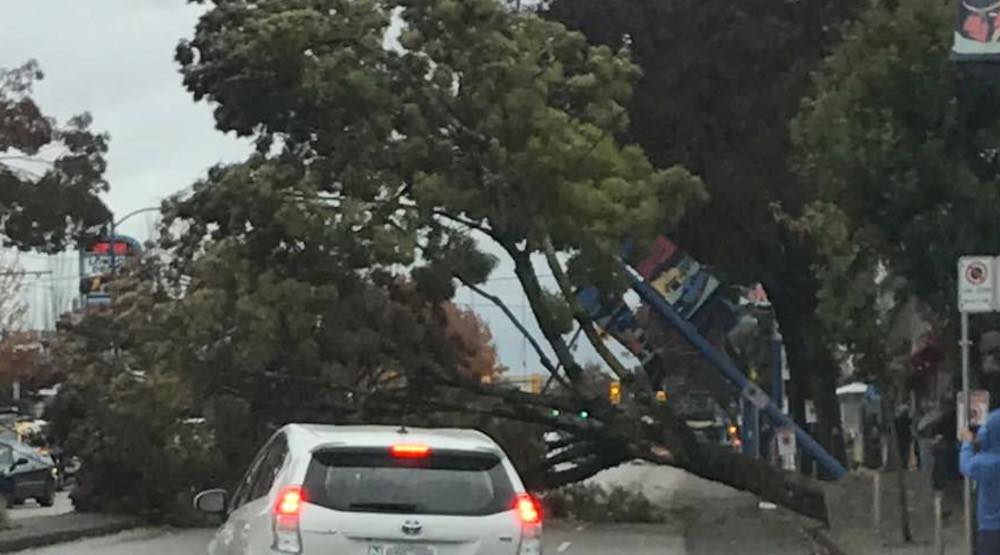 High winds earlier this afternoon caused a large tree to topple down onto the roadway on Kingsway just east of Joyce Street in East Vancouver.

Both directions of Kingsway from Joyce Street to Boundary Road are now closed to traffic due to the debris and down trolley power lines.

Drivers are strongly advised to avoid the area and consider alternate routes. The No. 19 trolley bus running through the area has been detoured – a shuttle bus is running between Metrotown to Joyce Station via Kingsway, Boundary, Vaness, and Joyce Station in both directions.

Wind gusts from the second storm reached up to 90 km/hr in parts of Metro Vancouver this afternoon, causing numerous trees and branches to topple onto power lines.

As of the time of publication, over 48,000 BC Hydro customers in the Lower Mainland were without power, down from the peak of 75,000 earlier this afternoon.

A tree also fell onto the trolley lines on Cambie Street, south of Dunsmuir Street, in downtown Vancouver. And in Surrey, a 15-year-old has been taken to hospital after being found unconscious in a wooded – possibly struck by a tree.

Transit riders should allow for extra travel time due to fallen trees and branches on some routes, necessitating the detour of buses, and additional volumes as more people are taking transit due to the storm.

Another storm, more potent than the first two storms, is expected to arrive late Saturday.