Andrea Ng is no stranger to cyberbullying. When she was just 16 years old, she uploaded a photo of herself getting ready for a school dance. Then in 2010, Someone took the image and Photoshopped a pair of breasts over her shirt, giving the illusion she was taking a topless selfie.

To make matters worse, the perpetrator created a fake Facebook account under her name and started adding her family and friends. Everyone could see the photo.

She called the police, but they said they couldn’t do anything about it.

“I had high hopes that my local police department would take my case seriously and help me stop whoever it is that is trying to sabotage me. No action was taken. ‘Nothing could be done’ they said, over and over again,” says Ng on her blog.

She reported the page to Facebook, and it was taken down. Relieved that her nightmare was finally over, Ng could move on with her life.

Fast forward to February 1, 2015, when she received a devastating message from a friend.

“He told me what happened, that exact same photo was posted on Tumblr, but had no attachment to my name.”

The picture had over 1,000 re-blogs since it was posted in November of 2014. She reported the photo and Tumblr took it down, to Ng’s relief; however this time, her relief would be short-lived.

On April 19, she received a call from her boyfriend. Someone had created a Twitter account and tweeted out the photo with lewd comments.

“He mentions a naked photo and I immediately burst into tears,” she says. 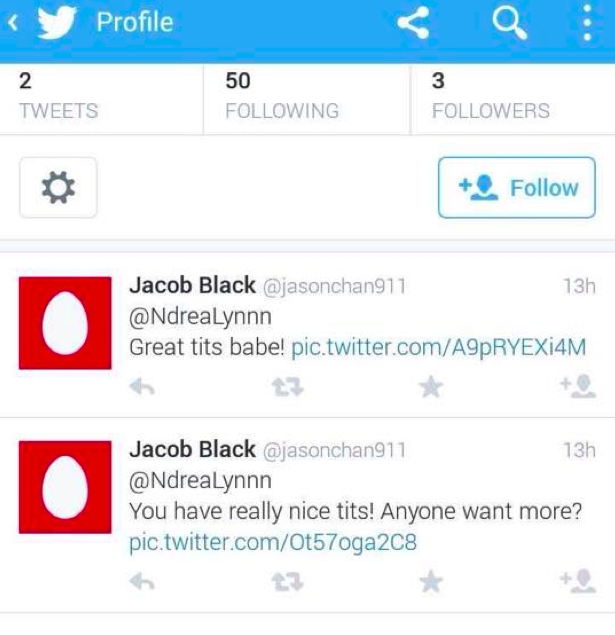 Ng is a student at Kwantlen Polytechnic University and wants to get into public relations, and she says it’s very important to have a squeaky clean online presence.

Finally, she’d had enough. She found the Twitter account under the handle @jasonchan911 with the name “Jakob Black.” This person had gone as far as to follow companies where she had applied for internships.

Once again, she called the police, and once again, they said they couldn’t do anything about it.

“What about Amanda Todd, the police were able to track her harasser all the way to Europe,” she said to the officer who stopped by her house.

“Well, I have confidence that you would not harm yourself because of this situation, and unless this situation becomes more serious I will then put more resources towards this case,” was the officer’s reply.

Vancity Buzz reached out to the Richmond RCMP for comment. Corporal Dennis Hwang says in an e-mail that “the RCMP treats all cases of bullying very seriously. It is a national concern. Each case is unique and will be examined as such by the investigator.”

Ng became frustrated. She says she knew the police had the resources to track the perpetrator down, but they refused to utilize them.

“There are many young individuals out there that may not have as thick of a skin as I do, and it’s sad and ironic to see Canada offer $3.3 million to combat cybercrime in Central America, Caribbean when the RCMP aren’t even willing to combat cybercrime that is taking place right in their backyard.”

By sharing her story on her blog, she wants people to take something away from her five year-long ordeal.

“The only thing I can really say is be smart about using social media. Social media is a love/hate relationship, and I would have never thought I would be a victim of cyber bullying.”