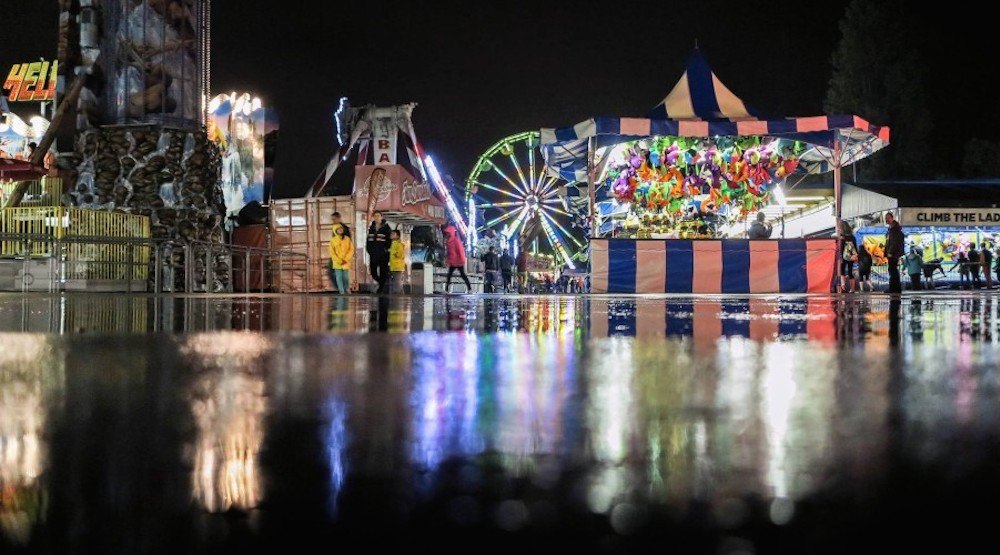 Wet weather during The Fair at the PNE. (Jenn Chan / Facebook)

The Fair at the PNE will not be moving its 15-day event to late-July, away from the traditional late-August period leading to Labour Day right before the start of the new school year.

Last year, organizers proposed the idea of moving the Fair to late July in pursuit of better weather conditions following consecutive seasons of wet weather in August. This was particularly the case during the 2015 season, which saw record low attendance due to extended periods of poor weather including a major wind storm.

Such a date change to late-July would begin in 2018.

But organizers announced today that it will no longer consider this option due to reasons that include the routing schedules of its exhibitors and staffing availability. The PNE consulted with the public, staff, fairgoers, suppliers, exhibitors and partners prior to its decision.

“Ultimately, it is important for us to remain financially self-sufficient, so every decision related to our business must be taken very seriously,” said PNE spokesperson Laura Ballance in a statement. “We do believe that moving into July would provide better weather however there are no weather guarantees in Vancouver.”

“When we combine the risk of weather with several other significant hurdles such as feedback from partners, routing schedules of our exhibitors and staffing availability, it is evident that the prudent business decision for now is to stay within our current window of time ending on Labour Day.”

As well, a move to a period beginning in late-July, potentially including the first week of August, would potentially conflict with two of Vancouver’s largest summer events – the Honda Celebration of Light fireworks festival and Vancouver Pride festivities including the Pride Parade.

This year’s Fair at the PNE will be held from August 19 to September 4. Comparatively, here are the dates for the other major summer fairs in Canada and the Pacific Northwest:

At one point in its history, the Fair at the PNE was a three-week-long event, but this was shortened to 17 days in recent decades and then to 15 days in 2013, with the first two Mondays eliminated from the season schedule.

Meanwhile, PlayLand at the PNE will open for the 2017 season on May 6.

Planned revitalization for Playland and PNE

Last June, Vancouver City Council approved a $1.5-million budget for the PNE to create a detailed plan to turn Playland into a “world-class” theme park.

The improvements would expand the footprint of Playland from 15 acres to 22 acres, adding new rides and attractions as well as extensive theming. Six themed zones are envisioned for the reimagined theme park: Main Street for a new entrance into the site; forest-themed Adventure Land; the Coastal Village based on B.C.’s fisheries centred around a new lake; an urban-themed District; and a Wonderland-themed area with bright and oversized objects designed for kids.

Preliminary estimates peg the cost of the revitalization and expansion project at $120 million. PNE staff will return to Council this summer or fall with a detailed design and financial report to seek the final approval required for the project.

Separately, major improvements are also planned for the rest of Hastings Park as part of an effort to improve both its green space and event configuration for the annual Fair at the PNE.

In 2016, over 712,000 guests attended the 15-day Fair while approximately 400,000 people passed through the gates of Playland outside of the Fair duration.