When a good idea is ignited, it sets fire to the soul and spreads to whomever it touches. It starts as simple as rubbing sticks together; a few friends with talents that fit, someone knows someone who can help, then it sparks, it burns slowly, steadily, until a blaze is erupted with the power to light up the darkest streets – this good idea made of fire that spreads like wind.

Eastside Stories follows the lives of four disadvantaged residents in the Downtown Eastside, as they navigate the streets, their lives and their pasts. Those people are Danillo Estrada, Jens “Spoons” Petersen, Dianne Tobin and James “Jim” McLeod, and you will soon know them. One who shares the wisdom of bees, one who finds friendship on the streets, one who lives in the moment, who speaks five languages, who walks mile after mile with a leg that cannot bend.

What captivated me most about this 10 minute documentary is how the stories were told and how they affected me.

It didn’t make me feel hollow, or full of despair. Instead, for the first time since moving to Vancouver a few months ago, I said hi to the old man on the corner with his upturned hat, I nodded to the pregnant girl sitting by the lamppost with her cardboard sign, I waved at the couple in sleeping bags with their old coffee cup full of change.

These people, they aren’t invisible, and acknowledging that is worth something. 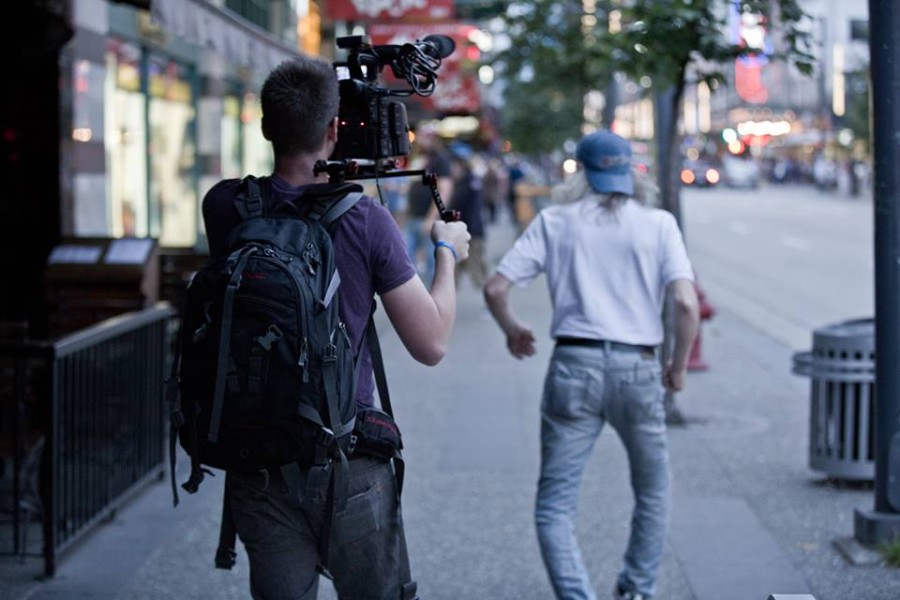 Eastside Stories chronicles struggle in the most beautiful, human way – it isn’t intrusive, it lets life be, it lets a moment breathe. The cinematography seems effortless, fluid, like you are really walking with these people, like they are showing you their way. It isn’t about exonerating an issue, it’s about telling their stories, it’s less about trying to save them and more about acceptance and understanding. It does not aim to point fingers, but instead start a conversation.

The initial spark started with illustrator Lauren Brem and her ability to freeze a face, capture an emotion and make you feel something for a stranger on paper.

“I was asked why my artwork displays so much emotion, and that’s because art is how I emote,” she said. “Ideally what would I want to do with my artwork if I could do anything? I wanted to elicit the same emotions that I feel when I’m drawing in other people and have it do some good.”

How much good would come of it, the team never anticipated.

“When we first started I thought I had a pretty good idea of what I wanted, I mean I thought I knew exactly the kind of stories I would be hearing, I would think ‘I’m going to draw this face’ and I’ll think I understand it…but then…I personally had a bit of an artist identity crises for a little bit during the film. The whole project I think had an identity crisis for a second, because it was so mind-blowing from when we started to what we actually uncovered. I thought I understood the drug and alcohol aspect of it, I thought it was going to be all dark and gloomy and the [people of the Downtown Eastside] would need saving, but not everything was like that. It totally changed my life.”

Through the kickstarter STORYHIVE – an online platform that gives local content creators the chance to pitch their ideas for a $10,000 prize from TELUS – they began the journey that would leave them breathless like burning embers.

“As we started to meet individuals in the community, I think it really became this thing where we wanted to, with no agenda or no specific focus necessarily, really just allow people to tell whatever story they wanted to tell,” said Production Manager, Mitchell Ballentine. ”We wanted to kind of remind people that there is always a story behind that face, and that’s really where Lauren’s artwork ties in as well.”

And that’s how this version became anything but the “same old sob story” of the Downtown Eastside, the dark and glum narrative of “poor Vancouver” that has caused us to be numb and blind towards someone sitting on the cold sidewalk.

“The film really is about reminding people that the person sitting on the street, the one who you walk by, they have their own unique story,” said Mitch. “What we found after talking to 30 different people, four of whom ended up in the final version, was that yes, drugs and alcohol were significant points of their story.”

“So we didn’t omit it,” added Lauren.

But it wasn’t the whole story either.

They made sure they weren’t leading towards an assumption; instead they were just following the truth as it weaved through the theme of these people’s lives.

It’s the kind of thing where at the end, you feel like maybe we aren’t so different after all.