Facebook announced Wednesday morning a drastic new update that will allow users to replace their profile pictures with a seven-second looping video, along with several other changes affecting mobile users.

Beginning soon, users can film a short video clip that will play in place of their profile picture anytime someone visits their profile. The video will loop in the same style is the ubiquitous gif.

“The world has changed since we first introduced profiles in 2004. On News Feed and profiles, we’re seeing people create and view more videos than ever before. Today we’re starting to test the next step in an obvious evolution of profiles: profile videos,” the company said in a news release.

“Profile videos will let show a part of yourself you couldn’t before, and add a new dimension to your profile.”

But for those of you who don’t feel the urge to display themselves in moving pixels, the profile picture will remain, but with some added features. Building on the popularity of the image filter feature used to celebrate Pride week this past summer, Facebook is creating the option to post a temporary profile picture for moments when users want to celebrate milestones or events.

“Want to support your team in the week leading up to the big game, commemorate a special milestone like a birthday or vacation or show off a great #tbt picture? Now you can create a temporary profile picture specifically for those moments and events,” said Facebook.

By the looks of examples, this feature will let users add text or stickers onto their profile picture, as seen below: 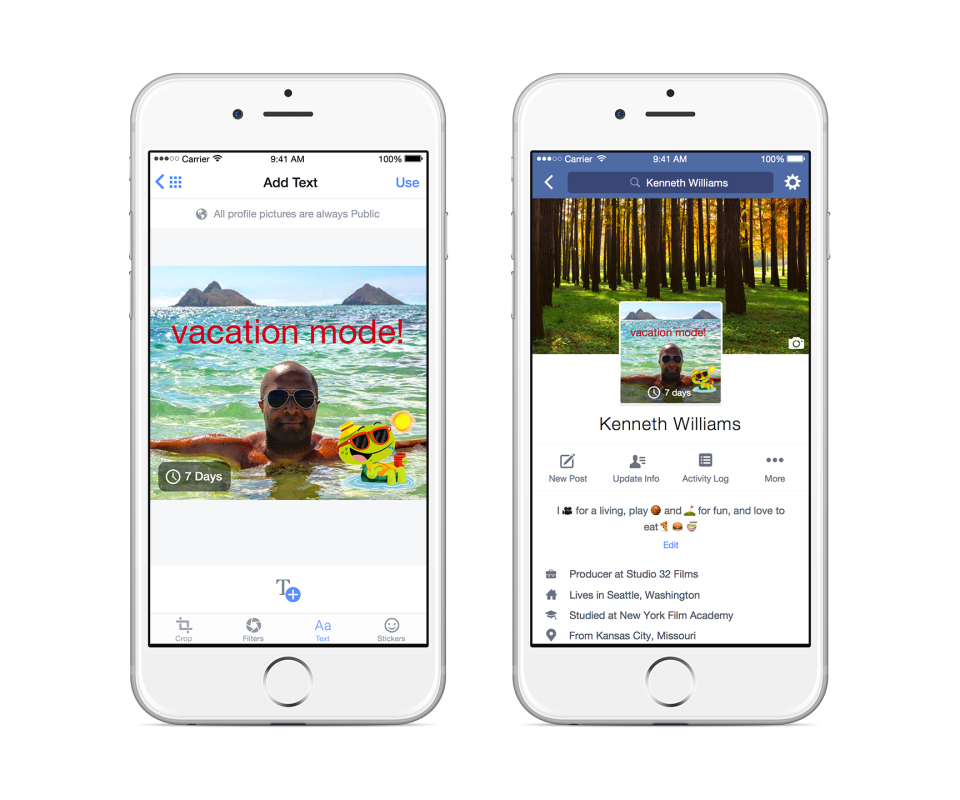 Other additions include a new space at the top of each profile where users can insert a one-line bio of themselves and decided which information, like birth date or occupation, shows up in the space. They will also have the option to select up to five featured photos to display right below.

The social network is also tweaking a few design details, including putting profile pictures front and centre on the mobile display.

There is no specific date known for when these changes will appear on users’ mobile apps, but Facebook is currently testing on select iPhones in the UK and California and will be rolling out to everyone soon.