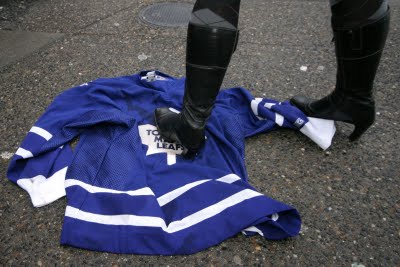 Tonight our beloved Vancouver Canucks take on the lowly Leafs and you could just feel the hatred in the crisp Vancouver autumn air. Our hatred for the Maple Leafs is one of the things that unites us and seeing them miss the playoff year after year is quite satisfying, but why?

Perhaps it’s because the CBC continues to shove the Maple Leafs down our throats every freaking Saturday night! Last time I checked Ottawa and Montreal are also Canadian cities and the CBC is still the Canadian Broadcasting Corporation.
However, I say Canadian very loosely when it comes to the CBC as it caters mainly to the Toronto audience and somehow believes that the rest of Canada would rather see the Leafs play every Saturday night instead of the Canadiens or Senators. News flash the Leafs suck and they haven’t had any sort of star power on that team in god knows how long.

It has gotten so bad that I only turn on the CBC during  Coach’s Corner and the intermissions. This constant bombardment of the Maple Leafs seems to be part of some sort of devious plan to supplant Montreal as the most storied NHL franchise in our country. It’s pure and simple brainwashing the youth to become Leafs fans which worked in the 50 and 60’s only because the CBC had limited choice. However, I think that same tactic has had an adverse effect on today’s youth and the CBC has now come to this realization as they are now finally contemplating showing less of the Leafs on Saturday. To that I say thank god!

Maybe it is because they get away with tampering or perhaps being the principle reason for firing Al Strachan.

Now we Vancouverites (and western Canadians) are also to blame for some of this. We need to stand up and just stop giving a shit about what goes back on in central Canada and do our own thing. Most of this can be explained by our inferiority complex, including this rant. After all, it’s not like we’ve won anything. The best thing we can do is strive to be the best damn city in Canada (now only if we had a politician that got that, ahem *cough* Gregor we need more festivals and venues in this town and also thanks for not giving a shit about the parade of lost souls).

Moreover, Leafs fans talk about their team as if they are the Yankees or Manchester United. Seriously. The Yankees and United do one thing you don’t, win! You haven’t even made the playoffs in the last five years. I hope you never win the cup, as that would be the best punishment to Leafs nation for force feeding Toronto Maple bullshit courtesy the old bears at the CBC!

Don’t even get me started on Much Music, (hello ever thought of bringing your award show to other cities!) and TSN, all I can say is thank god for Sportsnet.

Why do you hate the Leafs, tell us.