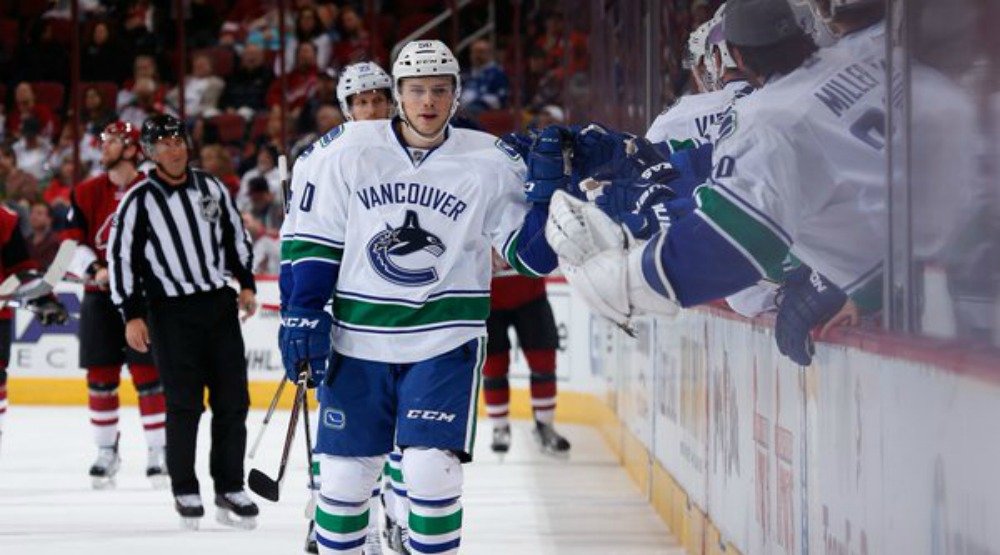 When looking at the 30 protection lists from around the NHL, the Vancouver Canucks might have the most unappealing crop of unprotected players available to the Vegas Golden Knights.

The National Hockey League’s 31st franchise has 19 potential players to chose from, but as Nick Bondi pointed out on Monday, there’s really only four targets that have a fair chance on being claimed.

We can likely narrow down that shortlist to two players: Brendan Gaunce and Luca Sbisa.

Our first preseason game will be against @Canucks this September. We'll pick one of their players before then. Suggestions? #VegasDraft pic.twitter.com/wFTtoNRWDc

According to Greg Wyshynski of Yahoo’s Puck Daddy blog, Golden Knights general manager George McPhee told reporters on Tuesday that “We’re going to have to move some defencemen. Because we’re going to claim a player.”

Could that mean Luca Sbisa and his $3.6 million price tag could find himself manning the Vegas blueline and strip next season? Perhaps, and that’s what most people in the hockey community feel will happen.

If Vegas elects to nab Sbisa off the Canucks roster, it’ll allow the Canucks to keep Brendan Gaunce, who proved to be a trustworthy defensive fixture in the Canucks bottom-six forwards last season.

If you solely analyze Gaunce’s counting stats (goals, assists, points) you might conclude that Gaunce, who scored ZERO goals in 57 games in 2016/17, wouldn’t be much of a subtraction if Vegas snags him.

After all, he led the league with the highest amount of games played without a goal. According to Rob Williams, he fell just one game shy of the Canucks all-time single-season record without a goal set by Alek Stojanov. He’s found the back of the net once in 77 career games.

That’s unideal however you look at it, but the silver lining is that he can only get better with some luck and continued development. Just because Gaunce didn’t score doesn’t mean he didn’t have an impactful season, and there’s some tell-tale signs that the Sudbury product will have a serviceable and reliable NHL career ahead of him.

The amount of data available in the hockey analytics community can help prop up the value of some players, and so far, Gaunce is the quintessential example.

His underlying shot metrics showed that no other Canuck limited their opponents in 5-on-5 shot attempts (minimum 400 minutes) against. Translation: he was superb in the defensive zone at shutting down the opposition.

Factor in his high percentage of defensive zone starts, his strong Corsi For relative to his teammates, and being the only Canuck to crack above 50% in shot differentials (excluding small sample sizes again); and Gaunce not only showcased himself as a reliable shutdown forward, but the argument could be made that he was the Canucks best defensive forward.

His most common linemates last season were Jack Skille and Michael Chaput, both of whom faired worse when apart from Gaunce. He’s already a bonafide fourth-line centre, and for a young hockey player, you couldn’t ask for more from a defensive standpoint.

Having completed his third professional season and his first full campaign with the Canucks, the 23-year-old still has time on his side to round out his offensive game. He’s also currently a restricted free agent and has four years left of club-controlled time, meaning that he’ll come in cheap to re-sign in the future, barring an unexpected offensive explosion.

While he may not have the goal-scoring prowess you’d expect from a first round draft pick, he still converted on over 10% of his shots down in Utica under the direction of new Canucks bench boss Travis Green. Green utilized him in all situations and eventually allowed him to produce in a top-six manner where he notched 34 goals over 149 regular season and playoff games.

At some point, the goals will start to come for him, especially when his average ice-time of 9:56 per game last season with the Canucks increases. Gaunce earned Green’s trust in the minors and progressed, and there’s no reason to believe why he can’t be an effective checking forward at the NHL level that can chip in with the odd goal from time to time.

Drafted as a centre out of Belleville, the former Bull and Erie Otter can play left-wing or down the middle. In the dots, Gaunce won 51.2% of his draws. He showed glimpses of being a valuable penalty killer, and could become a staple on one of Travis Green’s PK units next season, considering the Comets were the third best penalty-killing team in Gaunce’s last full AHL season.

While he might not be the most physical specimen, he never takes a shift off, and his 6-foot-2, 217-pound frame helps him wins puck battles down low, and allows him to be a force along the boards.

Despite his limited season, he still led all Canucks forwards in hits (excluding Joseph Cramarossa), which tells you that their forwards weren’t the most rambunctious unit. Size in the NHL may not be as crucial as it once was, but there’s still a need for player of Gaunce’s stature; on the current roster, only Erik Gudbranson is taller and heavier. Far too often the Canucks were pushed around last season, and in a division that features the Anaheim Ducks, Los Angeles Kings and Edmonton Oilers, the team needs his physicality. Coming into last season, the Canucks were the lightest team in the NHL.

The #Canucks have lost either F Brendan Gaunce or D Luca Sbisa to #VegasGoldenKnights in expansion draft. It's not a surprise pick.

A key note to remember is that Vegas can take only 10 restricted free agents, meaning they’ll have to select 20 players under contract, and neither Gaunce or Reid Boucher are signed. Selecting Sbisa seems like the likeliest option, which bodes well for the outlook of the Canucks.

If Vegas choses Sbisa, it would not only free up some cap space, but also open up roster spot to open up for 2016 first rounder Olli Juolevi depending how his summer goes and how he performs in training camp and the pre-season. Newly signed defenceman Philip Holm or the hulking Andrey Pedan will also compete for a spot on the backend.

The Canucks have an abundance of middle-six forwards, and at first glance, losing Gaunce in the expansion draft may not seem like a big loss. But for a fourth liner that doesn’t get scored on very often, there’s some definite value there. If he’s given a more increased offensive role and is plugged with better linemates, then the goals will start to go in.