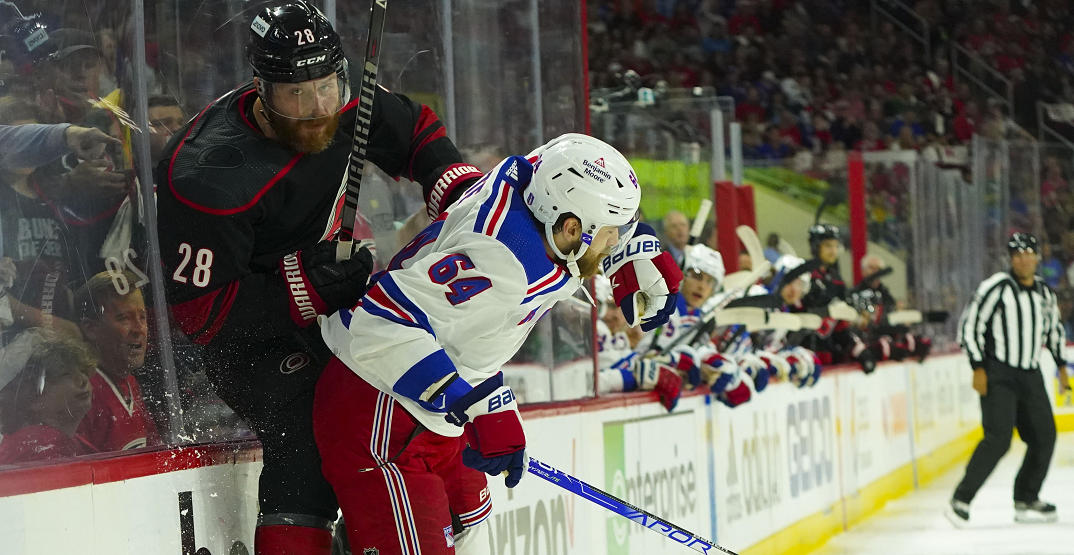 Every team in the NHL could use a player like New York Rangers forward Tyler Motte.

Sure, he’s never been anywhere close to the best offensive talent in the league, with a career high of just 16 points with the Vancouver Canucks in 2018-19.

But he’s been able to grind out an NHL career through his gritty, physical play style while also mostly staying out of the penalty box.

An unrestricted free agent this summer, Motte was traded to the Rangers from Vancouver moments ahead of this year’s deadline. He’s gotten his chance to play with a contender, with the Rangers’ 110-point season ending up as the NHL’s seventh-best record.

And it appears that he’s been accepted by the Blueshirts’ fandom with open arms. During the Rangers’ 2-0 loss last night to the Carolina Hurricanes, New York fans were quick to spread their praise to Motte:

Scratch that, Tyler Motte has battled for loose pucks, hustled to beat icing calls, killed penalties and has tried his ass off on each shift. He's off the hook as far as I'm concerned

Outside of the kid line, the best #NYR forward so far this series had been Tyler Motte. Dude is everywhere. I wouldn't mind moving him up in the lineup either to try to jumpstart something

Shoutout to Motte, only Ranger that wants to be there tonight.

This is a matchup nightmare. Passing is not an option. Get it deep and go to work behind the net. Put motte in the top 6. Anything but this, it’s not gonna work. #NYR

Oof. Just got a mouthful of coffee grounds at the end of my cup. Still less gritty than Tyler Motte though

this is a Lindgren and Motte and Igor stan account now, I fear

But more than a few Rangers fans came to the same conclusion: you probably won’t win many playoff games with Tyler Motte as your best player.

Tyler Motte has been the Rangers best forward tonight.

Not going to win any when Motte is your best forward. Breaks up the kid line and the other lines have done nothing so far. If u told me they go to Carolina and only allow 4 goals in 2 games I would have said they NYR would be up 2-0 in the series.

Igor and Motte the only ones who decided to show up tonight. Your top 5 PP does absolutely nothing with them but give up a shorty to a dman. 1 goal in 2 games. Beyond unacceptable and pathetic. Your best players need to be your best players. They need to pick it up! #NYR

He hasn’t picked up a point in any of the four playoff games he’s suited up for with the Rangers, as they currently sit down 0-2 to the Carolina Hurricanes.

Motte made $1.225 million this past season in New York and Vancouver, and is set to hit the free agent market again this summer. Who knows, maybe a Canucks reunion is in the cards? For now, it’s all eyes on tomorrow afternoon’s Game 3, as the series shifts to Madison Square Garden for a 12:30 PT/ 3:30 ET start.