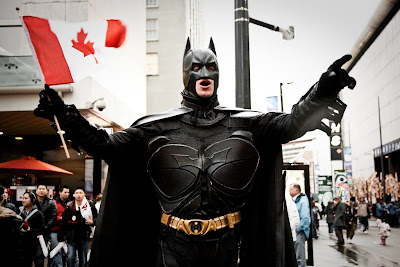 Ever since the vandals/anarchists masquerading as protesters trashed the The Bay downtown VANOC officials knew that they head to beef up security. However, with no more money left in the security budget, Furlong had to make the call to his long time pal commissioner Gordon and BAM! KAPOW! (if you never watched the old Batman series you won’t get that lame attempt of a joke) Batman flew over right away.
Batman now stands amongst the hoards of people, posted up along Granville and Georgia watching over them as their sworn protector from lazy, unhygienic scourge that is the ORN/APC/freeloaders of Canada/povertypimps…I can go on and on but you get the picture.

As stated before Batman wasn’t in the original security budget, thus VANOC can’t pay him for his protection. So by day he poses for tourists and Vancouverites alike to make some money, hence the cheesy Canadian flag to lure unsuspecting tourists and drunks for a photo with the caped crusader. However, by night, he hovers over the city, waiting for the chance to break up a ‘protest’. 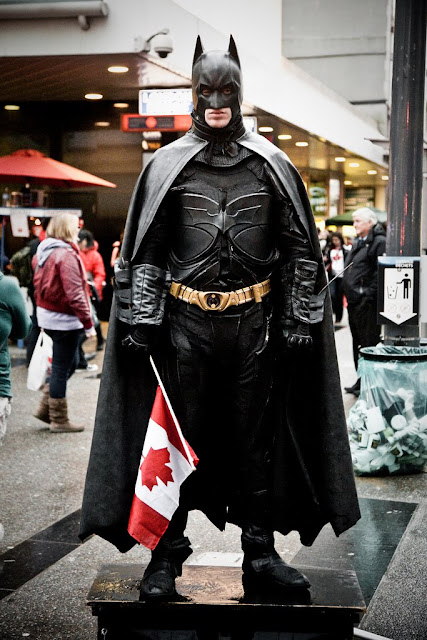 Many thought the search lights all around town are for the amusement of Olympic revelers? No, well some are, but if you look closely one of them is for the dark knight. Which one? I don’t think even Bruce Wayne knows…