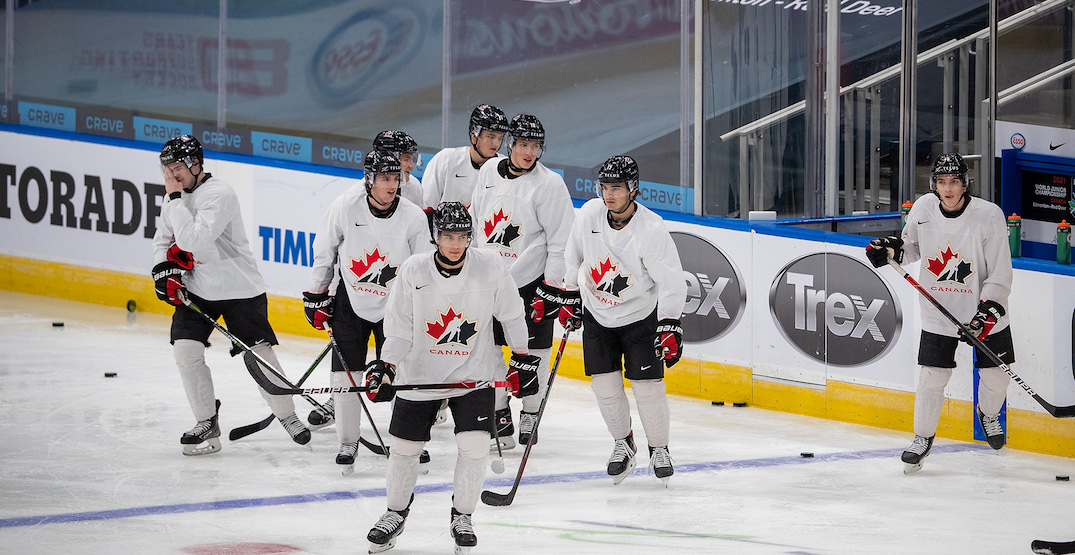 A unique edition of the IIHF World Junior Championship is about to get underway.

With no fans in attendance, the IIHF is breaking out their own Edmonton bubble to try to get this year’s tournament completed without creating any health crises. Canada is on home ice looking to defend the gold medal they won in the Czech Republic last year.

Usually at this point in the year the NHL season would already be well underway. In that sense, excitement for this year’s tournament is even higher than normal for starved hockey fans.

Pre-tournament games began yesterday, with a highly anticipated exhibition game between Canada and Russia scheduled for today (6 pm ET/3 pm PT on TSN). The tournament begins on Christmas Day, with Canada opening the tournament against Germany on Boxing Day.

Here’s everything you need to know about this year’s World Juniors.

COVID-19 has already impacted the tournament before it’s even started.

Eight players on Germany tested positive in addition to two staff members with Sweden upon arrival to the Edmonton bubble. As a result, both teams’ pre-tournament games were cancelled.

The virus has also had an impact on Team USA. Forward Johnny Beecher, a first-round pick of the Boston Bruins in 2019 and member of last year’s American team, tested positive during training camp. He was not included on the team as a result.

Because of Beecher’s positive test, his roommate and University of Michigan teammate Thomas Bordeleau was also dismissed from camp. Though he never ended up testing positive himself, the potential exposure also cost him his spot on the team.

Team Canada also had a COVID scare in their extended training camp in Red Deer. The team was forced to suspend operations for two weeks, while players, coaches, and staff quarantined at their hotel. The team arrived to Edmonton fully healthy though.

The hope now with everyone in the Edmonton bubble is that the concept can work as well for the World Juniors as it did for the Stanley Cup playoffs last year and keep everyone safe so the tournament can be completed.

As always, the tournament will consist of 10 countries split into two groups of five for the round robin.

Canada is in Group A, along with Finland, Germany, Switzerland and Slovakia. Finland often proves to a pesky team at these tournaments. In fact, they’ve won three of the last seven gold medals.

It’s expected to be a pretty weak group though, and Canada will be the heavy favourites to win it. They’ll avoid stronger teams like Russia, Sweden and the United States, all of whom are in Group B with the Czech Republic and Austria.

Canada and Finland will play their final round robin game against each other on New Year’s Eve in a matchup that could very well determine who gets the top seed in Group A.

Yes, Austria. Led by star forward Marco Rossi, the blue-chip prospect drafted ninth overall by the Minnesota Wild in October, the Austrians are competing in the top division for the first time since 2010.

Round robin games that are tied after 60 minutes will then play a five-minute, three-on-three overtime period. If the game is still undecided, it will advance to a five-round shootout.

The medal round matchups are all just one game to move on. However, the fifth-place teams in each group will play a best-of-three series against each other to avoid relegation for next year’s tournament.

Every year the World Juniors provides hockey fans with a chance to see the best teenage players in the world, their favourite team’s top prospects, and some of the game’s future stars.

This year’s tournament will provide many fans with their first chance to see their team’s top pick from October’s draft in meaningful action.

The Vancouver Canucks didn’t have a pick until the third round this year, but Canucks fans can watch 2019 first-rounder Vasily Podkolzin on Russia.

All games will be played at Rogers Place in Edmonton, beginning on Friday. The medal round begins on January 2.