A massive piece of machinery to complete the SkyTrain Evergreen Line’s 2.2 km underground section is expected to arrive in December.

The tunnel boring machine is being manufactured by Catterpillar and will be shipped in parts and pieces by rail and truck. The machine’s drill head is specially designed to handle the route’s soil and rock conditions. Upon arrival, workers will assemble the machine and will begin to dig the tunnel in February 2014.

Currently, construction crews are in the process of excavating a large tunnel boring machine launch pit near Barnett Highway and View Street – the northern end of the tunnel. From the site, the machine will bore downhill southwest under Clarke Road and will reach a depth of 60 metres at its lowest point. It will emerge just before Como Lake and transition into an elevated guideway.

The machine is 9.84-metres in diameter, 90-metres in length (including the 11-metre long drill head) and weighs 1,100 tonnes. It will be operated 24-hours a day, seven days a week by S.E.L.I. Canada, which also undertook the tunnel boring contract for the Canada Line. 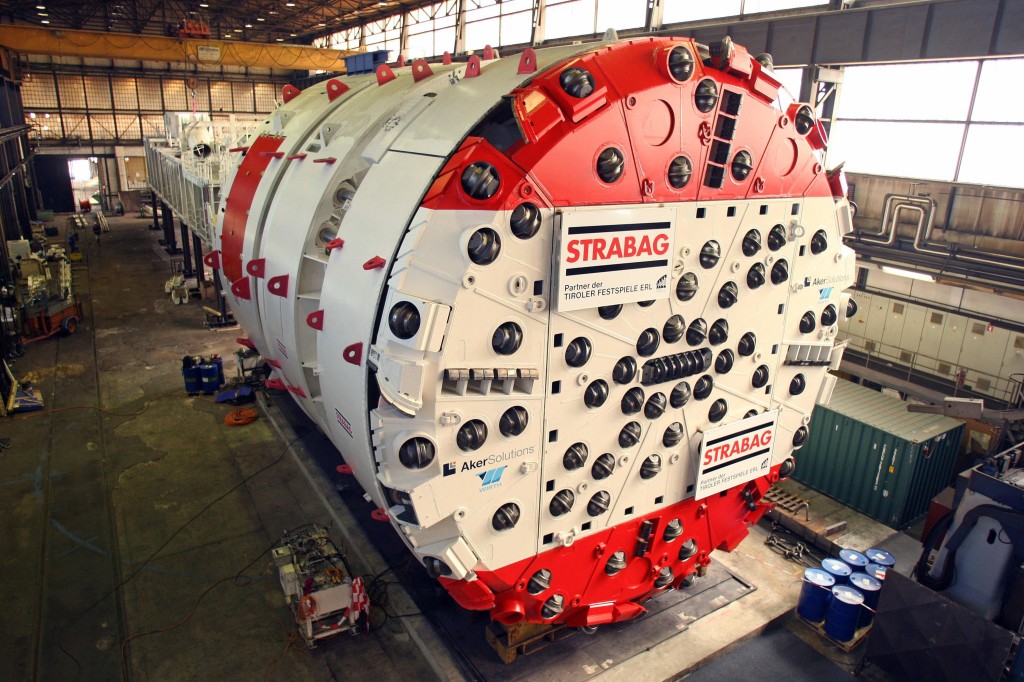 This video was made for a subway project in Barcelona to illustrate how a tunnel boring machine works.
[youtube id=”wJwK1wVjx_o” align=”center”]

The Evergreen Line tunnel boring machine is built specially with a wide diameter of 9.84-metres. Unlike the Canada Line’s twin tunnels under downtown Vancouver, the Evergreen Line machine is intended to bore a single tunnel that will fit both the northbound and southbound rail tracks along a side-by-side configuration.

From 2006 to 2008, the Canada Line used a 6-metre diameter machine to bore two, 2.5 km long side-by-side tunnels that dived as low as 20-metres beneath the False Creek bed. The machine was disassembled when it broke daylight for the first time at Waterfront Station and reassembled at the Olympic Village Station launch pit for its second pass.

Video of the Canada Line tunnel boring machine breaking through into daylight at Waterfront Station. Tunnelling work for both tunnels was completed after 20 months.
[youtube id=”3BEKAEkTlJg” align=”center”]

Built differently from the Canada Line, the Evergreen Line will be a seamless continuation of SkyTrain infrastructure and will share the same fleet of trains that are also utilized by the Expo and Millennium Lines. It will add 11 kms of new track and 6 stations to the network and include a ‘light’ vehicle maintenance and storage facility.

The new SkyTrain addition will take approximately 15 minutes to travel from end to end. It will be mainly elevated, with ground level segments in Port Moody, and will stretch from the existing Lougheed Town Centre Station to its terminus at Douglas College Station just past Coquitlam Centre. Evergreen Line trains will begin from Vancouver’s VCC-Clark Station to provide passengers with a one-train ride to Coquitlam in under 45 minutes.

The $1.4-billion Evergreen Line will largely run on an elevated and ground-level guideway, and will also include a short 2-km bored tunnel. The project is jointly funded by the federal government, provincial government and TransLink. Quebec-based SNC Lavalin is responsible for building the new line and was also previously responsible for the design and construction of the Canada Line, Millennium Line, Expo Line and the Golden Ears Bridge.

Before boring could occur, this required digging a 183-metre deep, 40-metre wide shaft into Seymour Mountain to launch the tunnel boring machine at its proper depth. Another shaft 271-metres deep, 40-metres wide was also dug at Capilano Reservoir to link the tunnels with the new pumping station. Each tunnel is 3.8-metres in diameter and is bored at depths between 160 to 640-metres beneath the mountain cutting through hard granite rock.

Given the geotechnical uncertainty at such depths, the tunnel boring project was fraught with risk and encountered major engineering issues after tunnel boring contractors encountered unstable rock and determined it was unsafe to continue boring. The original contractor was dismissed for halting construction and a new contractor was brought in to finish the boring job using the same engineering designs and tunnel boring machines as the first contractor. With the delays, litigation and the hiring of a new contractor, the cost of the tunnelling work went $170-million over the original budget.

By the time the machines reached the Capilano Reservoir in 2010, the twin tunnelling job under Grouse Mountain took seven years to complete. One tunnel will bring water from Capilano Reservoir to the newly constructed Seymour Water Filtration Plant (near the Seymour Falls Dam), the largest of its kind in the world, where water is filtered from sediments and treated with ultra violet rays and chlorine. The second tunnel will convey treated water back to the Capilano Reservoir area where an existing downhill (gravity) water main will distribute the water to West Vancouver, North Vancouver, Vancouver, Richmond and Burnaby or 70 per cent of the region’s residents. 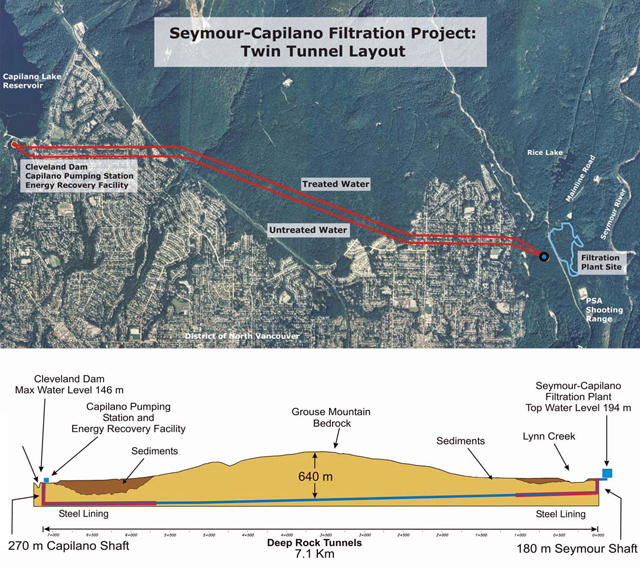