TransLink could change the name of Metro Vancouver’s fourth SkyTrain line, which is currently being built in the northeast sector of the region.

The name “Evergreen Line” was selected in late-2005 after the transportation authority ran a six-week long naming contest to determine the name of street level light-rail line. The project was not a SkyTrain project at the time and required a separate name to identify the different type of service.

Approximately 1,450 entries were submitted in the contest, of which two were shortlisted for consideration. “Spirit Line” and “Evergreen Line” were tested in focus groups, and the latter selection became the preferred name.

Port Coquitlam resident Marion Harmer, the winner of the contest, received the prize option of either $500 towards a purchase of a bicycle or six months of transit passes. She was also given the opportunity to be the first member of the public to to ceremonially ride the new light-rail line when it opens.

It was not until early-2008 that the Evergreen Line reverted back to ALRT (SkyTrain) technology. The provincial government released a new business case that favoured ALRT’s superior capacity, speed and ridership potential over street level light-rail.

The report found that there is a marginal cost difference between light-rail and ALRT, although the benefits were much greater.

The potential decision to ditch the “Evergreen Line” name likely deals with the issue of routing and the issue of existing branding. The new SkyTrain line will begin at VCC-Clark Station on the existing Millennium Line infrastructure and end at Lafarge Lake-Douglas Station – the Coquitlam terminus of the newly built branch.

End to end travel from the Vancouver to Coquitlam terminus stations will take approximately 45 minutes onboard a one train ride requiring no transfers.

An image from TransLink’s 2013 Annual Report shows that the Millennium Line span from Production-University or Lougheed Town Centre Stations to Columbia Station could be rebranded as a partial route of the Expo Line. Trains from Waterfront Station would reverse at either Production-University Station.

This is also a reversion to the original plan for the Millennium Line made by the last BC NDP provincial government in the late-1990s. However, plans to move forward with the construction of the planned phases to the northeast sector (Evergreen Line) and Arbutus Street on West Broadway (underground) were canceled by the incoming BC Liberal government in favour of prioritizing the Canada Line.

The $1.4-billion, 11 kilometre “Evergreen Line” extension will largely run on an elevated and ground-level guideway and includes a short two kilometre bored tunnel. It begins at the existing Lougheed Town Centre Station and comprises of six new stations. Completion and opening is on track for the summer of 2016.

The project is jointly funded by the federal government, provincial government and TransLink. Quebec-based SNC Lavalin is responsible for building the new line and was also previously responsible for the design and construction of the Canada Line, Millennium Line, Expo Line and the Golden Ears Bridge.

Image that shows transit planners considering routing options that eliminate “Evergreen Line” branding to establish it as an extension of the Millennium Line. Trains on the new route will begin at VCC-Clark and terminate at Lafarge Lake-Douglas Station. 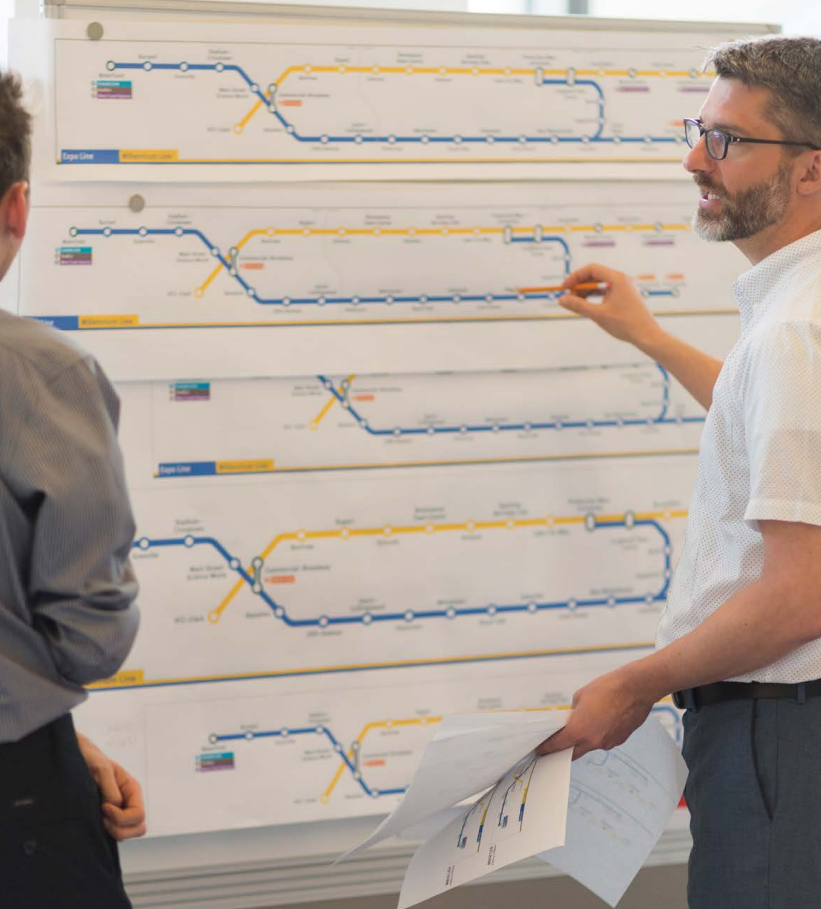 Current branding and station map of the SkyTrain Evergreen Line. 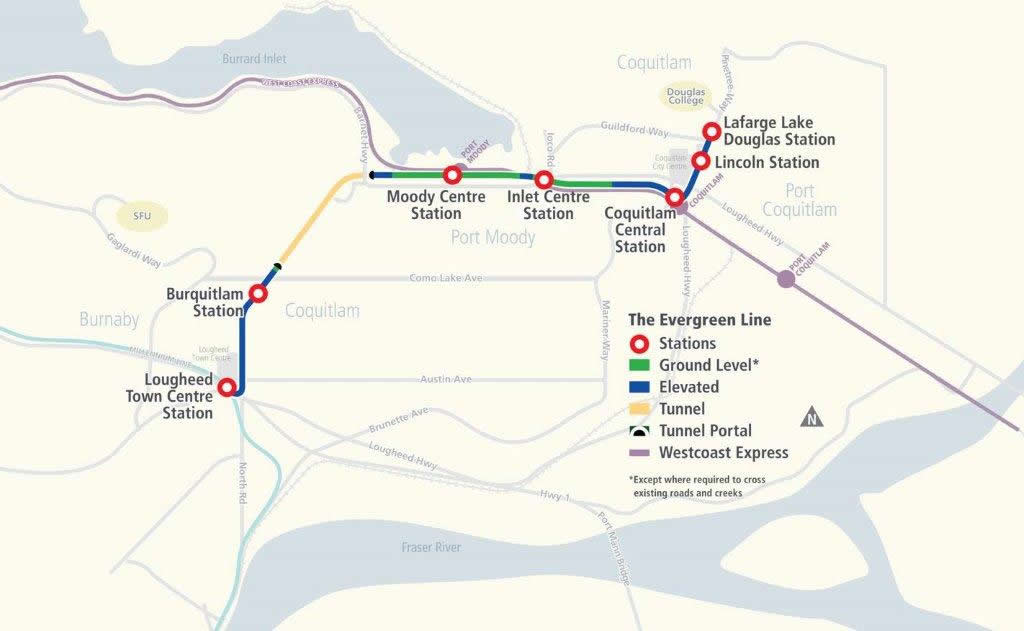