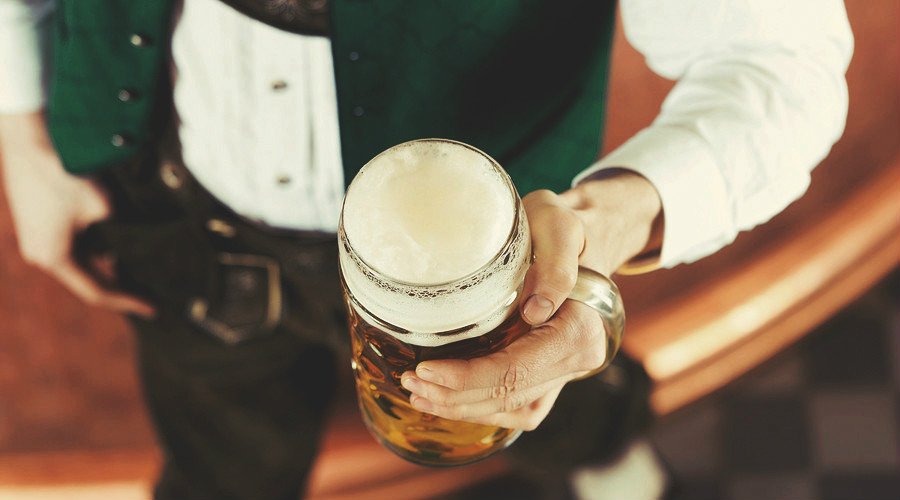 We owe a lot of thanks to Germany for foods we love in Canada, from the humble hot dog (frankenfurter) to jelly-filled doughnuts (Berliners) and beyond. You may not recall the last time you craved German food, but there are certainly many places to check out in Vancouver when you’re looking for German fare, whether it’s at a German-centric fine dining spot, or to pick up some breads or pastries with Germanic roots at a local bakery.

Many Christmastime treats are in the German tradition (think sipping mulled wine while roaming the Vancouver Christmas Market, or slicing up Stollen on Christmas morning), and a lot of classics from dark rye bread to sweet slices of Black Forest Cake all hail from Germany. And of course, those sausages!

Vancouver is perhaps more chock-full of German foods than you might think, from fine dining to one of Vancouver’s oldest eateries. And thanks to our love of craft beer, we can raise a few pints to the German-style of brewing right here at home.

So here is your essential Vancouver German food guide. 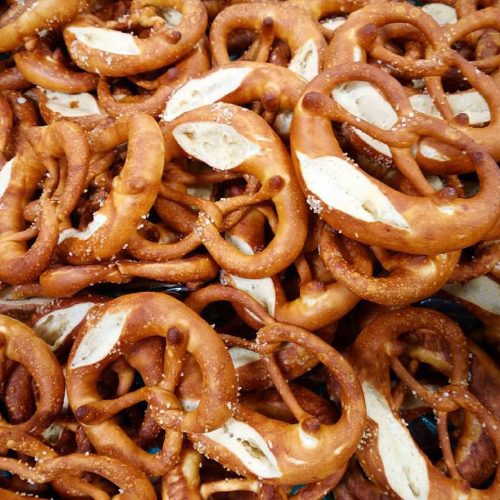 Pretzel, or brezel, is more than that bag of crunchy processed saltiness that you reach into at home on the couch. Its origins lie in a twisted, salted bread that is a wonderful snack on its own. At Swiss Bakery, they make a traditional soft German pretzel, along with Laugenwecken, a small pretzel bun. They also make sandwiches on longer pretzel buns.

Spätzle is essentially the love child of an egg noodle and a dumpling. It’s a rustic, homey hand-made noodle, perfect for soaking up sauce. At the West End’s French-German La Brasserie, you can order up spätzle as a side dish, or as a main, served with mushroom ragout and a mustard cream. Heads up, too, for their beautiful seared duck breast served with German potatoes.

Schnitzel is a traditional dish comprised of a thinned piece of meat coated in bread crumbs and deep fried. North Vancouver’s Jägerhof is a laid-back restaurant offering contemporary North American takes on fare mostly from Germany’s Bavarian region. They have a full section of their menu for schnitzel, from a simple Wiener Schnitzel to a more elaborate “Expo Schnitzel,” which is stuffed with black forest ham, camembert cheese, served with Alfredo sauce and seasonal veg, with pan fried potatoes or spätzle. You’ll also find an expansive array of schnitzel dishes in New Westminster at the Old Bavaria Haus.

The ultimate German street food, currywurst is basically sausages with spicy ketchup. There’s no better place to enjoy it as its meant to be: hot, cheap, and on the street. The Dog Meister cart, which can be found on Main Street at East 14th Street, serves German-style hot dogs and wieners, including a currywurst. For a more pubby experience, the Donnelly Group pubs also make a currywurst, as does Chinatown’s Bestie. 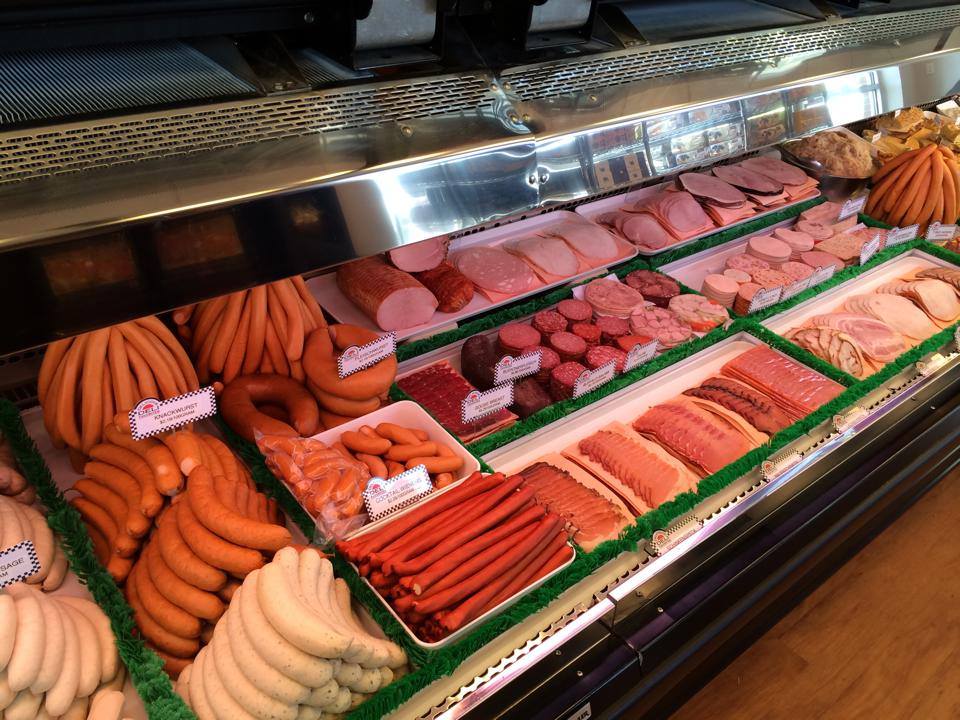 When it comes to wurst, this place is the best in the Vancouver area. Black Forest European Deli is located at West Vancouver’s Park Royal South, and is a go-to for traditional German sausages and meats. Look for Weisswurst, Fleischwurst, German bratwurst, Knackwurst, Bavarian smokies, Gelbwurst, Beerwurst, and much, much more.

In addition to multiple schnitzel dishes, Old Bavaria Haus in New West has a few items on their menu that are German staples, including Kartoffelpuffer, which are potato pancakes. They also have a cold app of creamy herring, Bavarian lentil soup, and some spätzle variations, along with French-style European fare. Their group menus are a great way to taste quite a bit and enjoy a full German meal.

Sauerbraten (and much more): Bauhaus

Bauhaus arrived in Vancouver’s Gastown about a year and half ago, and aimed to take the fine dining scene by storm. Their focus is on contemporary, elegant, quality renditions of German classics, as well as modern European-inspired finer fare, using fresh local ingredients. You’ll find a full section of the Bauhaus menu dedicated to German classics, meatballs, sides (potatoes, dumplings, spätzle, etc), sweetbreads, and asparagus with Hollandaise. However, they’ve also implemented a group dining menu showcasing all German fare, from smoked mackerel and potato salad starters to family-style platters of sauerbraten, koningberger klopse (meatballs), with traditional sides such as braised red cabbage, mashed potatoes, and sauerkraut. For dessert: Quark Cheesecake. They also offer an incredible wine list showcasing global glasses and bottles, with an impressive array of German whites by the bottle, too. 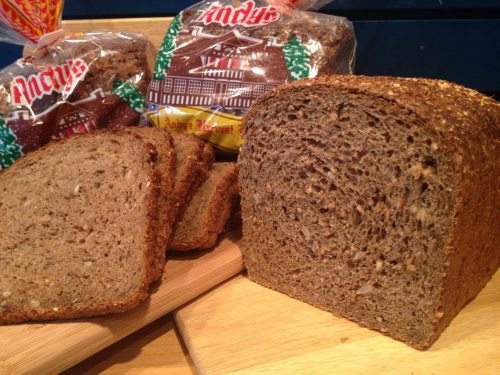 A heavy, dark, and mildly sweet rye bread, pumpernickel has roots in peasantry, but has become far more mainstream thanks to being a great vehicle for deli sandwiches. Andy’s German Bakehaus has pumpernickel, as well as many other German baked goods, including sweet treats (Black Forest Cake, Quark Cheesecake), and holiday favourites like stollen (Christmas bread). 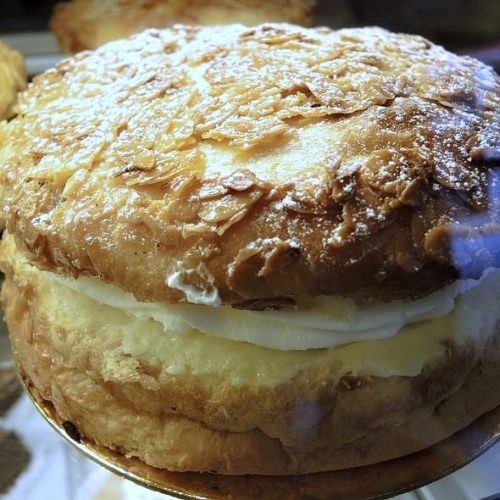 Bienenstich is a cake made with a soft yeast sponge that’s filled with custard and whipping cream and topped with slices of candied almonds. You’ll find this, alongside sweet goodies like Black Forest Cake, strudel, fritters, and Berliners (jelly-filed doughnuts). Breka also makes Bauernbrot (German sourdough) and other breads. Bonus: They’re open 24 hours every day!

One of Vancouver’s oldest restaurants, Deutsches Haus serves up German food, and also pours some German import beers, like Krombacher’s Radler, Dunkel, and Weizen. Since so many beers owe their origins to Germany, Vancouver is rife with options for beer lovers, particularly those who are interested to try German-style beers made by local craft brewers. Most liquor stores include a German beer section, as well, for purchasing by can or bottle. In the warmer months, look for local BC brewers to come out with radlers–lighter shandy-style beers with a fruit component; Central City has a Red Racer Radler, while Parallel 49 has Tricycle Radler.