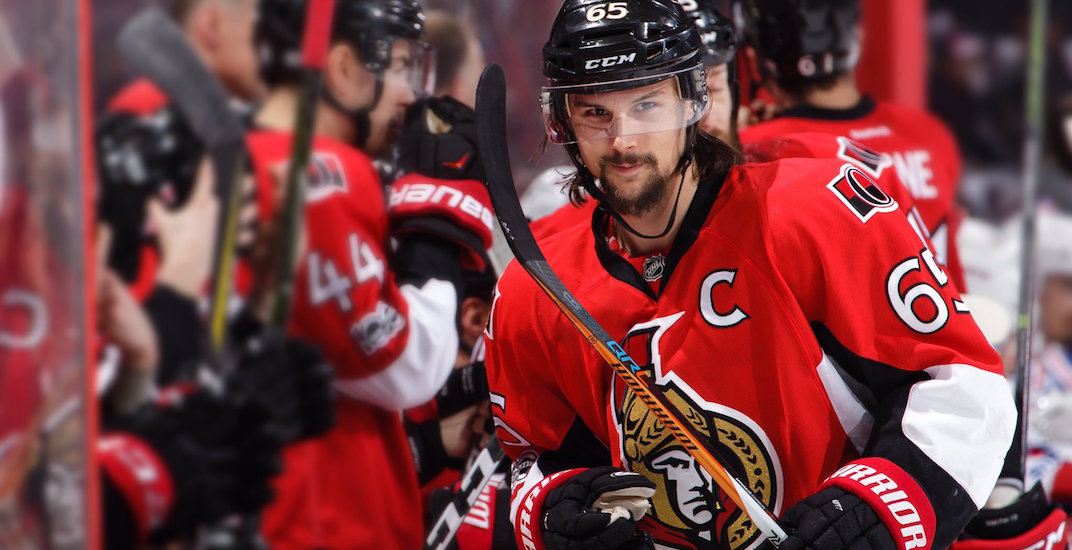 The balance of power has shifted.

The conditions on the draft picks are complicated, so I’ll let TSN’s Frank Seravalli explain them:

Here are the conditions on the picks in Karlsson deal: pic.twitter.com/y6LF0CKqjl

The fact that Karlsson’s relationship soured with the Sens over the past season combined with the fact that Ottawa is in a full-scale rebuild contributed to this move. The two-time Norris Trophy winner is in the last year of a contract that carries a $6.5 million cap hit.

The Sharks now boast the best blueline in the league, with Karlsson joining Brent Burns and Marc-Edouard Vlasic in San Jose.

“It’s extremely rare that players of this calibre become available,” said Sharks GM Doug Wilson. “The word ‘elite’ is often thrown around casually but Erik’s skillset and abilities fit that description like few other players in today’s game. With Erik, Brent Burns and Marc-Edouard Vlasic, we feel we have three of the NHL’s top defencemen and stand as a better team today than we were yesterday. We are thrilled to welcome Erik and his wife, Melinda, to San Jose.”

Aside from the draft picks, the key to the deal for Ottawa is Norris – a 19-year-old centre who starred at the University of Michigan last season. Norris was picked 19th overall by the Sens in the 2017 draft.

“Erik is an exceptional hockey player whose skills delighted our fans for the past nine years,” said general manager Pierre Dorion. “We thank him for his dedication to hockey, and we wish him all the best.”

“This is the right moment for us to rebuild our team, and shape our future with a faster, younger and more competitive team on the ice,” Dorion added. “We are going to build a culture of consistency which will allow this team to sustain better performance over the long term.”

The Senators avoid a huge distraction by trading Karlsson now, as NHL teams report for training camp this week.

The move comes three days after Senators owner Eugene Melnyk outlined the team’s plan in the most awkward way imaginable:

The Ottawa Senators are proud to share the vision for the future of our team and this organization. We are about to launch an exciting plan to rebuild our team and we are inviting you to be a part of our rise to new heights. #OttawaRising pic.twitter.com/hok2jYCUVi