Ensemble Theatre’s production of The Normal Heart is must-see theatre.

Residing at Jericho Arts Centre, Ensemble is presenting three period plays in rotation (the others being The Cripple of Inishmaan and The Duchess of Malfi). The Normal Heart will land closest to home for many audience members, as it takes place in New York from 1981-1984 focusing on the rise of the HIV/AIDS crisis – before the diseases yet had names, let alone well-understood causes.

Ned Weeks (Kazz Leskard) is a gay Jewish-American writer, and his friends have begun to get sick and die. Before long, it’s clear the problem is an epidemic afflicting, at first, only gay men. Dr. Emma Brookner (Rebecca Walters), a physician whose childhood polio has caused her to require a wheelchair, advises that gay men everywhere should abstain entirely from sex while the cause of the mysterious and fatal disease is uncertain.

Ned rallies a group of friends to lobby the media for support and the government for research money, who are largely ignoring the problem, while he also falls in love with New York Times writer Felix Turner. He seeks legal and financial backing from his lawyer brother Ben (Matthew Bissett), who is reluctant to help but not to build a $2 million home. As the death toll rises and cases of the disease spring up internationally, Ned seems to be shouting at a brick wall as the mayor avoids him and tensions over his caustic manner even fragment his activist group. 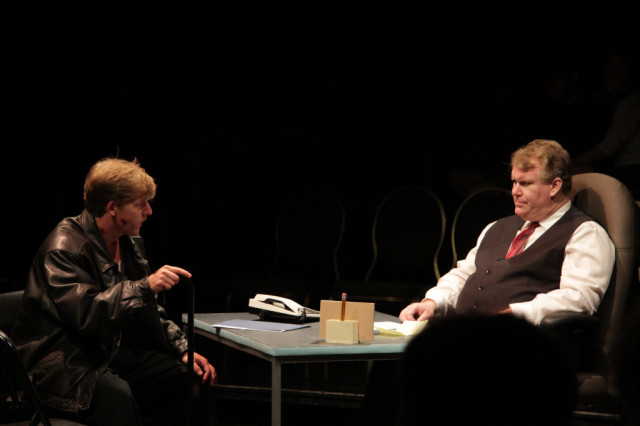 Daniel Meron and Matthew Bissett as Felix Turner and Ben Weeks, respectively, in the Normal Heart.

Leskard is perfectly cast as the agitating, high-strung Weeks. He’s a hopping mad, wildly gesticulating little ball of hellfire, desperate for someone, anyone with the power to help to remove their heads from the sand. His acting is superb – not one note falls flat. However, a weakness derives from the script; the character of Ned would likely scream as much about a hair in his soup as he would about everyone he knows dying of AIDS. He’s always screaming. This is Ned’s tactic for pressuring the powers that be, but almost two hours in, it’s not the government who’s worn out by all the screaming, it’s the audience.

Bissett as Ben is exactly opposite in tone but more than equally matched with Leskard; when the Weeks brothers confront one another, it’s truly like peering through a crack in the wall at a private argument. Bissett is clearly a seasoned artist; nothing is pushed, he is highly present and calm as the loving, but nevertheless homophobic brother keeping Ned at arm’s length.

Despite the relentless onslaught of would-be emotional hits characterized largely by Ned’s incessant screaming, the emotional climax, for me, is the moment Walters as Dr. Brookner sits alone in a spotlight centre stage, clutching medical notes from her numerous patients and imploring an unseen government official to fund her research. Yes, she too screams, but while Ned is used to being ignored and purely angry about it, Walters dissolves from staid bedside manner into desperate bewilderment as an outsider at why anyone would dismiss such a hideous epidemic. For me, watching that transition bears more emotional heft than watching the other characters go from angry and freaked out about one thing to angry and freaked out about another. 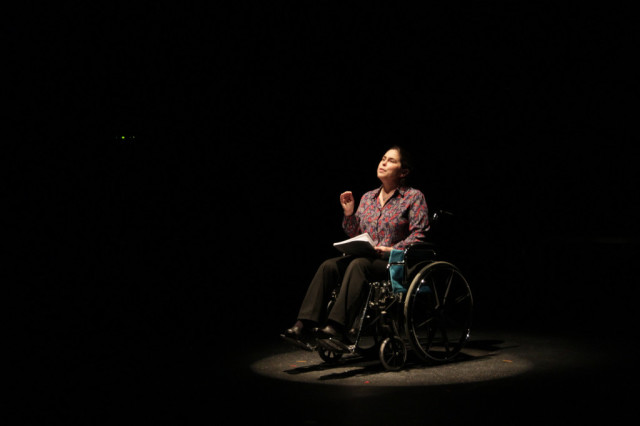 Rebecca Walters as Dr. Emma Brookner in The Normal Heart.

The other actors do a fine job. Mark Manning goes to a scary place as the free-love activist whose ’60s campaigns are now for naught as the sexual promiscuity he advocated seems to be the killer of his friends. Daniel Meron warmed up a bit slowly as Felix but executed his final scenes. Zac Scott is effectively grumpy as the closeted vice-president of a large bank who joins Ned’s group but doesn’t want to be seen. Adam Beauchesne does a fine job despite choosing an ill-fitting accent modeled on Blanche Devereaux from The Golden Girls. Troy Anthony Young threatens coldly as a city counsellor.

The legacy of a crisis

The Normal Heart should be seen for the acting and as a reminder of events that seem distant but were not so long ago. Still, be forewarned that it almost never dips below a feverish tension and had several audience members in tears at curtain call.

It reminded me that there was a time, before mine, when gay men realized the importance of establishing a community. There was a need to speak up loudly and with one voice that superseded even major disagreements. Friends were bound together through hideous trials.

That time is over. A sense of community has more or less dissolved; that’s okay. It was a function first of secrecy and then of crisis, and it’s good to have moved on. But the shame over the AIDS crisis seems to have morphed into an obsession with proving that we’re healthy and have nothing to be ashamed of. We may be moving in the other direction – away from love of one another to trying to prove just as desperately that we have love for ourselves, rejecting and avoiding any semblance of shame held over from the time we were filthy, a plague, unacceptable because of our identities. Often, protecting ourselves against these feelings means lashing out. A lot of gay men aren’t very nice to each other.

Perhaps that’s the legacy of the AIDS crisis. The Normal Heart shows how gay people rebuilt their ability to have sex. Perhaps in time, gay people will rebuild the ability to love.

The Normal Heart was also recently made into a TV movie.