When it was completed in 1973, the Empire Landmark Hotel on Robson Street in downtown Vancouver’s West End neighbourhood became one of the city’s tallest buildings .

But the 42-storey, 394-foot-tall tower’s days could now be numbered. Hong Kong-based international luxury residential development company Asia Standard International Group, the owners of the hotel site, intend to build two towers reaching 28 and 30 storeys in height – buildings that will be shorter than the existing hotel.

Daily Hive was able to confirm these plans with a senior executive at Asia Standard Americas, the North American branch of the development company. The redevelopment is being designed by Vancouver architectural firm Musson Cattell Mackey Partnership.

There will be 280 units of residential, including 223 market housing units and 57 social housing units, and retail space on the ground floor. The second floor of the podium will be used for office space and all four levels of underground parking will be accessed from the back lane.

No architectural renderings are available at this time; the project is scheduled for the municipal government’s Development Permit Board consideration in December 2016, and if approved demolition could begin sometime in 2017. A rezoning application is not required as the project falls under the West End Community Plan.

While building implosion methods of demolition are usually used for larger buildings, the company is still exploring its options with demolishing the 410,000-square-foot hotel tower and complex. The last time a building in downtown Vancouver was imploded was in 2006 when some of the Woodward’s structures were imploded using the “roll-over” method.

The Empire Landmark Hotel (then known as the Sheraton Landmark Hotel) was built in 1973 and consists of 357 guestrooms, 13,500 square feet of meeting and convention space, as well as the Cloud 9 Revolving Restaurant & Lounge on the rooftop of tower.

The restaurant has panoramic and relatively unobstructed views of downtown’s urban landscape, Burrard Inlet, Stanley Park, and the North Shore mountains and is one of the city’s three rooftop revolving restaurants, with the other two located at Harbour Centre and the Pinnacle Hotel Vancouver Harbourfront.

Its redevelopment would be similarly matched by plans to demolish the Safeway store site on Davie Street and replace it with 21 and 22-storey towers containing 319 units of market rental housing.

Looking up at the Empire Landmark Hotel from Robson Street. 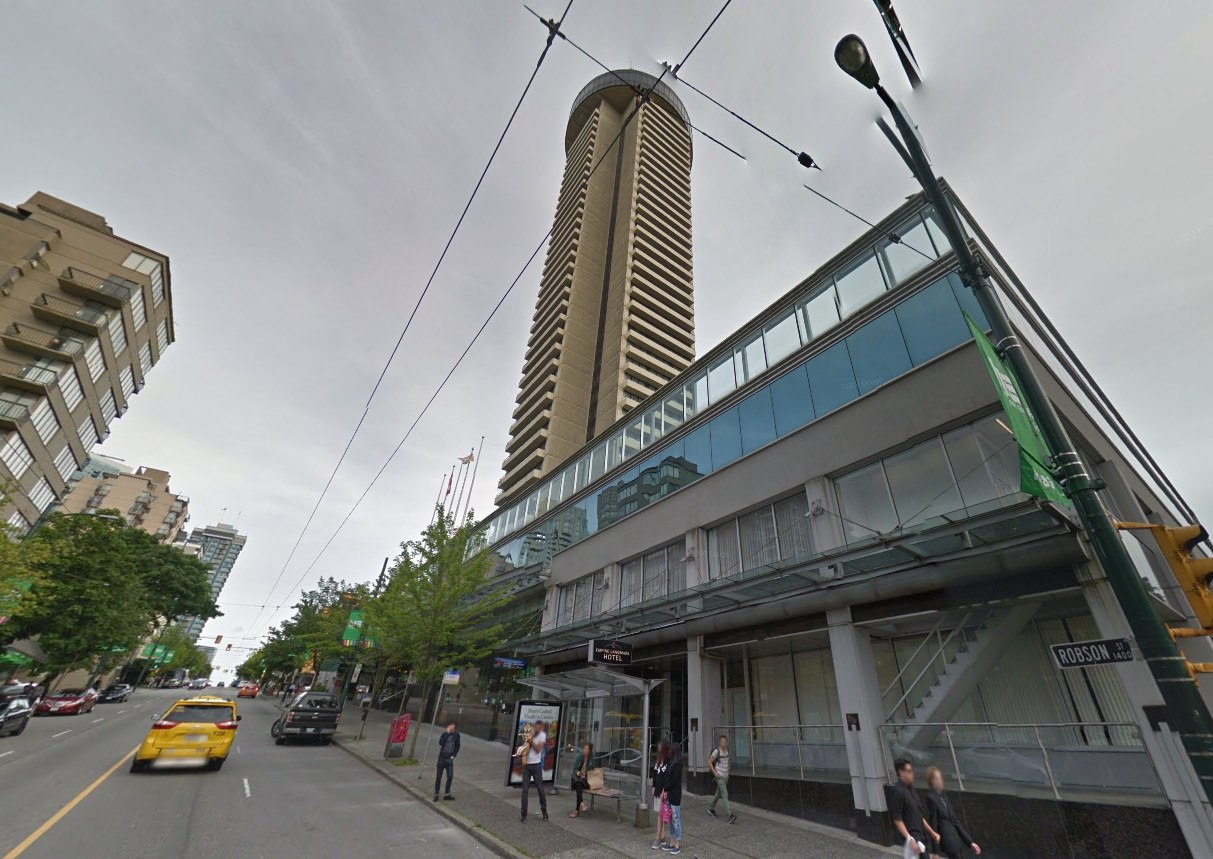