Vancouver’s own Elysian Coffee has added a fourth café location to their roster, and the unique space will allow the popular local roastery to expand their offerings at the site.

Elysian has taken over the former Container Coffee at the Burrard Hotel, in a deal brokered by George Richmond and Mario Negris of CBRE’s Urban Retail Team, and the coffee company is making short work of the transition, with plans to be in the soft open stage by the weekend, if all goes well. 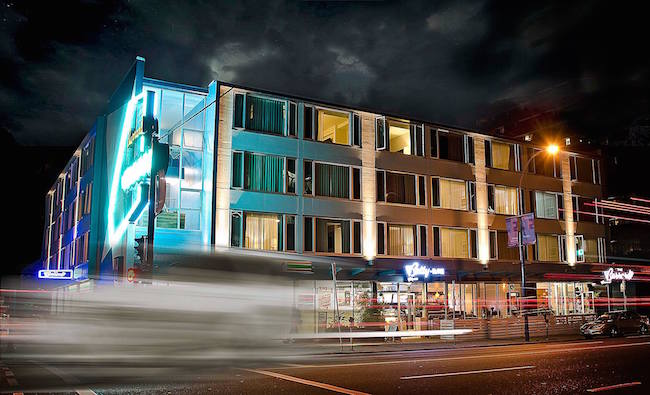 Christopher Rodgers, who will serve as the manager of the new location, tells Vancity Buzz Elysian landing the space was unexpected, and a bit of a whirlwind–and the whole thing went down in less than a couple of weeks. With keys in hand just since midnight Tuesday, Rodgers says they got into the space right away, and have been deliberately teasing fans via social media about what they are working on.

Day one at the new spot, downtown. open soon. #drama

Right now the Elysian crew is stripping away the decor from the previous tenant (a style Rodgers says had a “Miami-esque vibe”), and are working creatively within their time constraints to turn the 1,200-square-foot cafe into Elysian, though Rodgers says the real transformation will be ongoing for about the next month. They’ve got an order of schoolhouse-style chairs coming in, and are focused on doing other functional remodels to get them up and running in the funky space that happens to include a sloped ceiling.

there used to be huge TV’s on the wall. first thing gone! @follettdesignco making it happen. we’re rushing to open in just a few days. #gotime #suspense A photo posted by Elysian Coffee Roasters (@elysiancoffee) on Mar 16, 2016 at 2:25pm PDT

The fourth location, which will have a blend of new staff and those hired from the previous cafe onsite, brings with it the unique opportunity to work with hotel clientele, who may only be in town for a few days and have just the limited chance to get to know Elysian and their coffee.

Rodgers says this is also a prime chance for Elysian to showcase why they are longstanding experts on the local scene when it comes to providing customers the added value of the cafe experience alongside the retail sale of their roasted beans.

“We going to do things there that you’ve never seen us do before at any of our other locations,” elaborates Rodgers. Because it’s a hotel, Rodgers says Elysian hopes to be able to provide guests with in-room coffee service.

Additionally, they will be working with existing partnerships, like with Nelson the Seagull, to provide light breakfast options. And, in an exciting bonus, the location comes with a licence, which means Elysian plans to put in place a bistro-style wine and beer program–though all of that is still in the development stages right now.

Stay tuned to their social media accounts for news of their soft open and official grand opening launch.