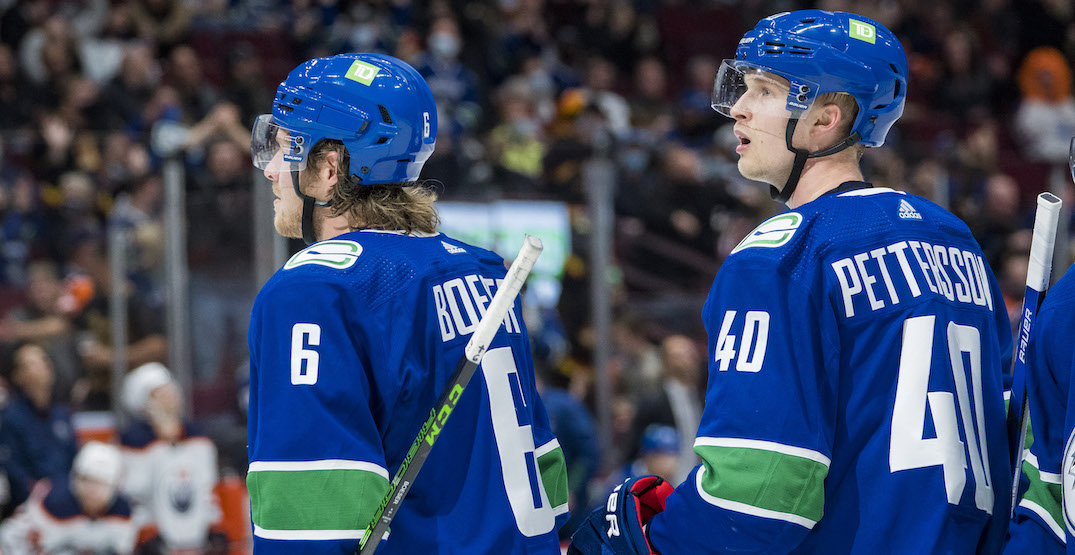 Elias Pettersson’s struggles this season have been well documented.

The Vancouver Canucks are off to their worst 17-game start to a season since 1997, and Pettersson is having the worst start to his young career.

After 17 games in each of Pettersson’s first two NHL seasons, he had 21 points. Last season, in which he started slow, Pettersson had 12 points.

This year the Canucks’ star player has just nine points in 17 games, and there doesn’t appear to be a good theory as to why.

“The wrist isn’t bugging me at all,” Pettersson told reporters this morning, debunking any thought that last season’s injury is playing a factor.

Pettersson missed part of training camp while he was waiting to sign a new contract, though Quinn Hughes went through the same thing and hasn’t struggled anywhere close to this degree.

Pettersson is tied for fifth in points on the Canucks right now, nine points back of leading scorer J.T. Miller. His struggles are most pronounced at even strength, where Pettersson has zero goals and three assists. But the Swedish star does share in the blame for Vancouver’s putrid power play, which is currently ranked 27th in the league.

That’s why at today’s morning skate, Pettersson was bumped down to the second unit, according to Thomas Drance of The Athletic.

Miller has taken Pettersson’s spot on the right flank, with Connor Garland on the left side. Alex Chiasson is occupying the net-front position, meaning that Brock Boeser is also getting demoted to PP2.

Pettersson has five power play points this season, one point back of the team lead (6) shared by Hughes and Miller. More is expected of him, however.

Pettersson’s greatest weapon is supposed to be his one-timer from the right faceoff circle. He’s yet to score a power play goal of any kind from that position, other than a flukey goal against the Philadelphia Flyers in the second game of the season.

“[Other teams] usually seem to take away my one-timer, so usually other spots on the power play is opening up,” Pettersson said, though he admitted to needing to find more of a “shooting mentality” rather than searching for the perfect play.

Pettersson’s last goal came from Hughes’ spot from the point against Dallas on November 7, after some movement by PP1.

We’ll see if personnel or strategy is the issue with the Canucks’ power play right now, though perhaps the answer is both.

Regardless, it’s a sad state of affairs when the Canucks feel like their best chance to succeed is without their best player being featured in a prominent role.

“I take big responsibility. I know I have a lot better in me. I don’t think I’ve played my best hockey.”

“We’ve just got to get better and find our swagger back.”