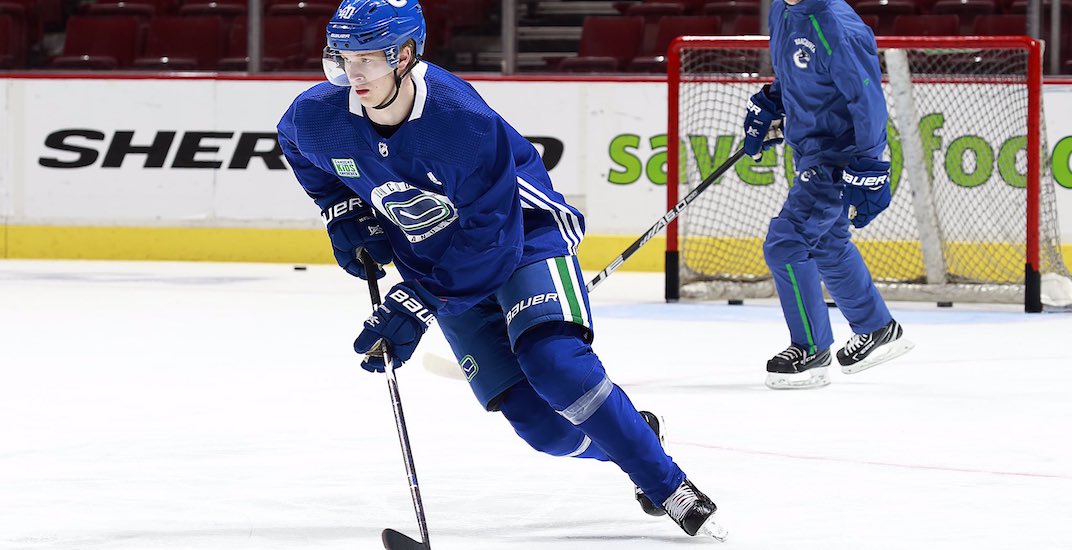 There’s certainly no guarantee, but Elias Pettersson could be back in the Vancouver Canucks’ lineup very soon.

The 20-year-old superstar hasn’t practiced with his Canucks teammates since suffering a scary-looking knee injury against the Montreal Canadiens on January 5. Thanks to a light stretch in their schedule, that means Pettersson has missed just three games, with the Edmonton Oilers coming to town on Wednesday.

“[Pettersson] had a good skate today, it was about 40 minutes,” head coach Travis Green told reporters following Tuesday’s practice. “He’ll skate again tomorrow and hopefully skate with the team tomorrow. I would call him day-to-day now.”

Green didn’t rule out Pettersson playing against the Oilers, which is certainly great news.

Pettersson, who skated this morning, is now "day-to-day," said Coach Green. He has not ruled out Petey playing against the Oilers Wednesday night @RogersArena. 🤞 pic.twitter.com/DvWLLixZXn

Typically, players don’t return to the lineup until they’ve skated in a practice with the team, though perhaps Green will count tomorrow’s game-day skate if it means getting his best player back in the lineup ASAP. Despite missing nine games due to injury this season, Pettersson (42 points in 38 games) has a five-point lead over Bo Horvat in the team’s scoring race.

Pettersson has been skating on his own since Friday.

If Pettersson does return, the Canucks will need to throw somebody on waivers in order to stay within the 23-man roster limit. Who that will be isn’t exactly clear, though Tim Schaller, Michael Del Zotto, and Alex Biega have been the most frequent healthy scratches of late.

Judging by the lines at practice, Nikolay Goldobin looks like he’ll be a healthy scratch for the Oilers game.

Despite scoring 23 points in 44 games – fourth best on the team behind Pettersson, Horvat, and Brock Boeser, Goldobin has found his way into Green’s doghouse. Green hasn’t been happy with Goldobin’s effort or his play away from the puck, and benched him in Sunday’s win against the Florida Panthers.

Tossing Goldobin on waivers would be premature, as he would surely be snapped up by another team, but the coach’s patience with the player is clearly running thin.

The Canucks are currently in a four-way tie with the Wild, Oilers, and Ducks for the final playoff spot in the Western Conference, with Edmonton, Buffalo, Detroit, and Carolina visiting Rogers Arena in the next eight days, before the All-Star break.