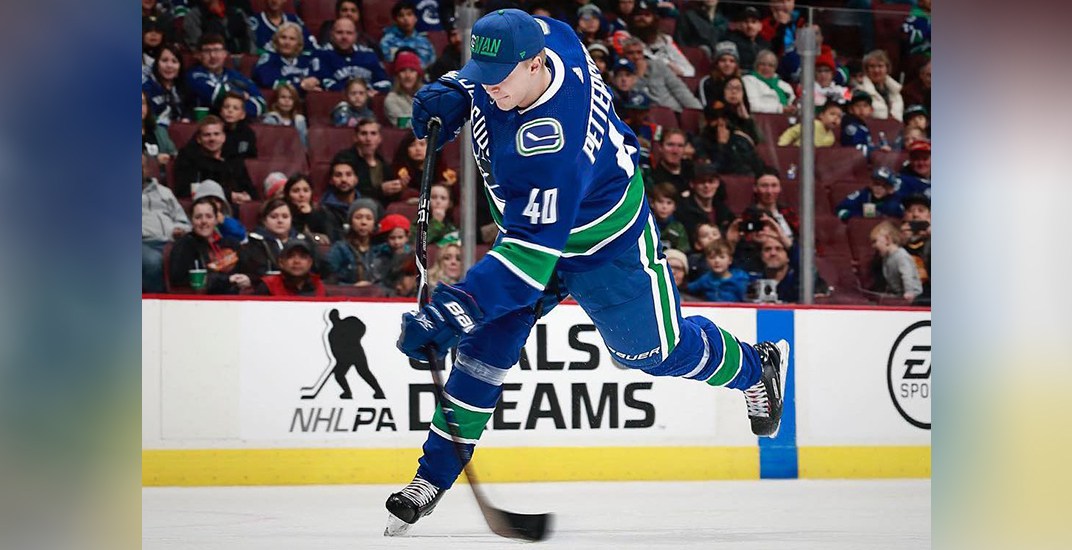 There’s a new hardest shot champion on the Vancouver Canucks and he just so happens to be the skinniest guy on the team.

Ummmm, @_EPettersson can SHOOT THE PUCK.

He’s your new #Canucks hardest shot champion. We will be watching this on repeat for the foreseeable future. 😏 pic.twitter.com/kcaopHYtOK

Another look at that 99.4 mph 💣 from Petey. pic.twitter.com/TpUeFixlgb

Size hasn’t stopped Elias Pettersson from excelling as a rookie in the NHL, and it hasn’t hurt his shot either. The 176-pound centre clocked the hardest shot at the Canucks’ annual SuperSkills event, ripping a 99.4 mph slap shot to win the competition.

Just goes to show that technique matters more than size when it comes to shooting the puck. Pettersson has 22 points in 23 games with the Canucks so far this season.

Though size and strength doesn’t hurt either.

Six-foot-five defenceman Erik Gudbranson, who was injured and did not participate this year, won last season’s competition with a 103.4 mph slapper. The team record is held Jason Garrison, who blasted a 105.1 mph shot in 2014.

Imagine what Pettersson’s shot might look like after he puts on more muscle in the coming years.

Another repeat winner! @BoHorvat went 4-for-4 to win the SuperSkills accuracy competition. 🎯🎯🎯🎯 pic.twitter.com/rOWn04bBH2

Bo Horvat defended his crown in the accuracy shooting competition, going a perfect four-for-four in 11 seconds.

With 25 points in 29 games, Horvat is one of three Canucks on the NHL All-Star ballot revealed this weekend. He could participate in this event at the Skills Competition in San Jose next month.

The family-friendly event also included a shootout challenge, where players showed off their creativity. The most inventive move came from Troy Stecher, who helped the Canucks cross-promote their new lacrosse team with a bank-shot off the back glass.