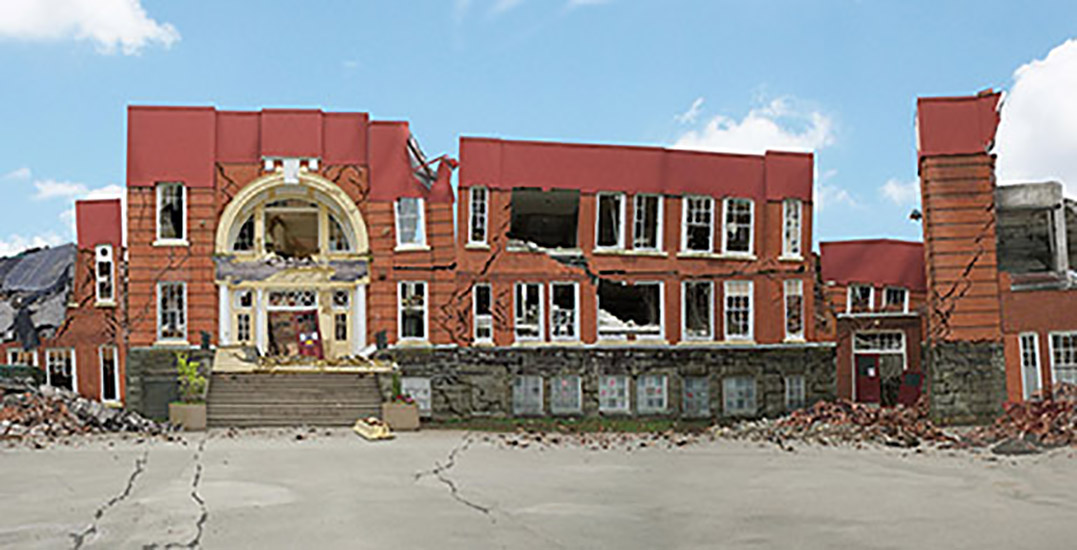 A visual artist and a team of seismic engineers and psychologists have released an eye-opening rendering of what an elementary school in Vancouver would look like after a major earthquake.

The rendering is part of a study led by Iris Lok, a PhD student in social psychology at the University of British Columbia (UBC). The image was used to determine whether a visual representation would be more effective than statistics when trying to display the risks of a major earthquake to members of the public.

Lok was the lead author of the study, which was recently published in the journal Collabra: Psychology.

According to Lok, the idea behind the research began when her thesis advisor enrolled her child in kindergarten.

“She was troubled by how many kindergarteners in BC would be heading off to schools that were expected to collapse during a major earthquake,” says Lok, in a release from UBC. “We wanted to figure out how we could harness our knowledge of human psychology to increase public awareness of this issue.”

She adds that people often make decisions by relying on their gut feeling, which, in turn, suggests that “people might be more likely to care about earthquakes if dry, abstract information were translated into vivid imagery that would affect people on a more emotional level.”

The school used in the rendering is a high-risk school in Vancouver that has yet to receive seismic upgrades. Engineers who participated in the study discussed what would happen during a seismic event and the artist created a vivid representation of what the school would look like.

An experiment was then conducted to see whether people would be more motivated after seeing an image, rather than statistics.

The results of the experiment found that after seeing the rendering of the elementary school, 77.3% signed a petition for fast-tracking seismic upgrades for school in the province.

In contrast, 68% of participants in a separate group signed the same petition after seeing just the statistics. Overall, the study found that “the image had little effect on people’s intention to prepare for an earthquake or their support for city initiatives.”

Lok is confident, however, that vivid images can motivate people to take action.

“If we want people in BC to take the risk seriously, it may be valuable to show them what familiar public buildings — or even their own homes — might look like after a major earthquake.”