Use the phrase “electric bike” within North American cycling circles, and you’ll be sure to elicit a strong response. Whether they sell, ride, or advocate for bicycles, many people in the industry still see e-bikes as “cheating” and “lazy”, something of which we ourselves were abundantly guilty, until we started doing some research.

Dig a little deeper, and you’ll find that e-bikes have been leading a quiet revolution on European streets for over ten years. In cities such as Oslo, Madrid, and Berlin, a basic battery-powered motor has added a new level of mobility, diversity, capacity, and range to what was already an amazingly efficient machine – the humble bicycle.

Nowhere is that more apparent than in the Netherlands, where one in five new bicycles sold is electric, with 80% of them bought by people over the age of 50. One recent study found e-bikes are ridden twice as far and twice as often as traditional, non-motorized bicycles, with the biggest impact on females and senior citizens. These are potentially dramatic changes to transportation patterns within our cities, with very real impacts on car ownership and motor vehicle congestion rates.

As Vancouver continues to invest in comfortable and accessible bike infrastructure, with a broader goal of becoming a world-class cycling destination, it becomes increasingly apparent that e-bikes will play a starring role in that journey. Their undeniable, unparalleled ability to close both the gender and age gaps, flatten hills, and remove sweat from the equation are seemingly too good to be true, addressing many of the barriers to the mass uptake of cycling as a form of urban transportation.

Both the bicycle retail industry and wider market have started to recognize the practicality and potential of e-bikes, which – in combination with more effective and affordable technology – paints a rosy picture for their future in a city such as ours. 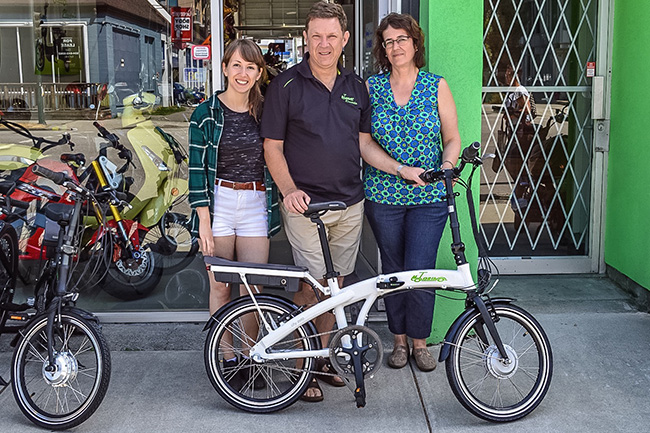 No one is more aware of these improving attitudes and technology than Vancouverite Steve Miloshev, founder of Greenwit Technologies, who – for the past 13 years – have designed, manufactured, and distributed the Motorino brand of electric bicycles across Canada. An Environmental Engineer by trade, Miloshev was inspired by the sea of e-bikes he saw while living and working in China in the late ‘90s. He returned home to launch his company in 2002, after revisions to the Canada Motor Vehicle Safety Act made e-bikes legal in the eyes of the federal government.

“It hasn’t always been smooth sailing,” Miloshev admits. “We had several brushes with bankruptcy in the early years, and many family members tried to convince me to give it up.” But Miloshev persevered, and as his products became more affordable and more reasonably priced, Greenwit eventually went from red to black in 2008.

Motorino now features a line of 18 electric scooters, bicycles and motorcycles sold by over 30 dealers nationwide, with new products and merchants coming online every year. Their latest models include a lithium polymer battery, which weighs less than 4-lbs., and offers a range of nearly 60-km. on a single charge (about 10 cents of electricity). With that in mind, Miloshev is very clear about Motorino’s target customer: “We aren’t interested in marketing to those who already ride a regular bicycle,” he says bravely. “We want to sell to those who currently drive a car or take the bus.”

Build your own electric bicycle 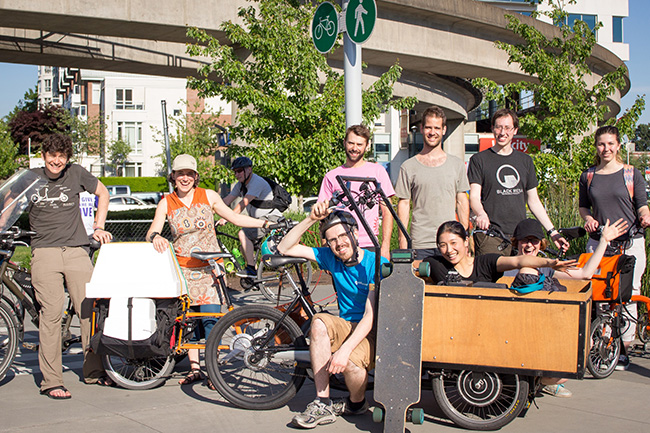 If purchasing an e-bike “off the shelf” isn’t for you, there’s always the option of installing a conversion kit on any regular bicycle, tricycle, cargo bike, or folding bike. And chances are – if you chose that route – you’ll be buying products from Grin Technologies, a Vancouver-based engineering company founded by Justin Lemire-Elmore. Lemire-Elmore was an engineering physics student when he started the UBC Electric Bike Club in 2004. His garage-based tinkering evolved into retailing and distributing e-bike parts, which has since grown into a thriving operation with a dozen full-time staff, and their own warehouse, fabrication, laboratory and office space near False Creek.

For ten years, Grin has been designing and manufacturing parts for electric bike conversions, selling them direct to enthusiasts around the world via their website, and supplying in wholesale to various other dealers and bicycle shops. They also provide parts, consulting, and technical support directly to companies that manufacture complete e-bikes. Last but not least, they are incredibly active in organizing and participating in community events that promote awareness of e-bikes, including our recent Cargo Bike Championship.

“Amazed how much it changed my lifestyle” 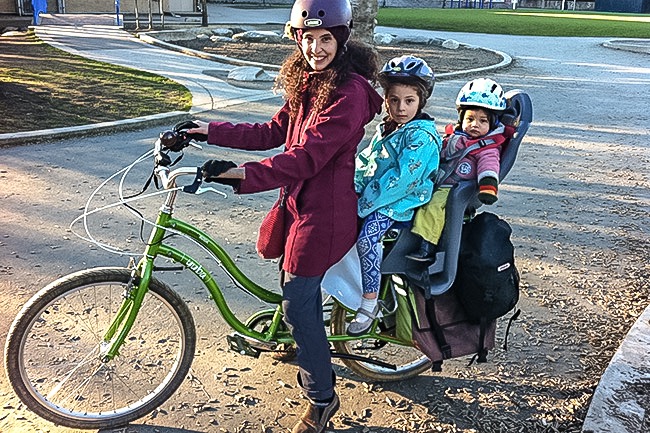 For Melissa Rodrigues, who lives car-free in East Vancouver with two young children, hauling the kids became an impossible task on her traditional bicycle. Her conversion to electric assist, however, was totally unplanned and unexpected: “I was writing a review of the Yuba elBoda Boda for Momentum Magazine, and during the first day of testing it out, I fell head over heels in love, and knew this was my bike!”

Like so many, before trying an electric bicycle, Rodrigues had no idea how beneficial it could be, especially when it came to tackling Vancouver’s countless hills, and discovering how much quicker she could get from point A to B. Now, although she still has her regular pedal bike, she almost always opts for her e-bike, even without the kids in tow. “I am really amazed how much it changed my lifestyle. It allows me to go longer distances and to places I normally wouldn’t have considered biking to.”

Rodrigues’ decision to switch has also caused others to take notice: “I definitely have friends and strangers interested in trying out an e-bike, after seeing mine in action!”

Admittedly, when we first met Rodrigues, we were of the disparaging mindset that she was “cheating”. But after seeing how active she is, and watching her arrive at school with a calmness and an effortlessness (despite having her two- and five-year-olds perched on the back), we’re now a little jealous of how easy she makes it all look. 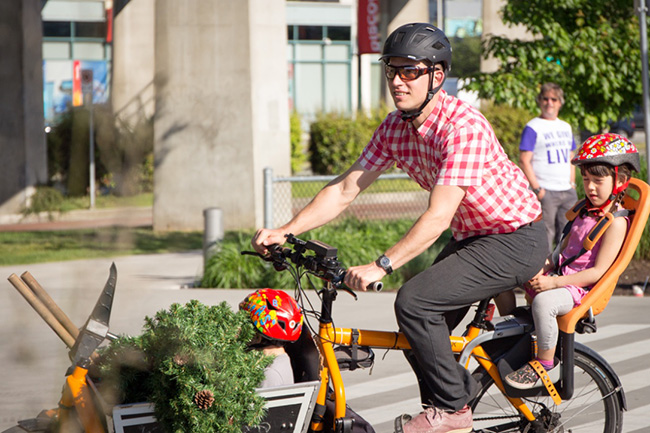 The most amazing part about these myriad successes is they have occurred in the face of rather significant hurdles. While many governments around the world seem to be betting on a transportation future centered on the electric car, they’re ignoring the fact that e-bikes could provide them with the biggest return on investment. Germany provides the most striking example, where 1.4-billion euros of electric car subsidies resulted in just 24,000 units sold as of 2014. Meanwhile, with zero government subsidies, an incredible 2.1-million e-bikes now roam German streets.

Sadly, things are no different in British Columbia, where the provincial government recently announced $10.6-million (worth $5,000 per vehicle) in electric car rebates, while continuing to refuse Provincial Sales Tax exemption for e-bikes (non-motorized bikes are PST exempt). And whereas the BC Scrap-It Program once offered $1,300 towards the purchase of a new e-bike or scooter when they became legal in 2002, over the years, that rebate has been whittled away to a measly $300.

From a government that sees little value in investing in anything other than the private automobile, we expect no less. But from a municipal government supposedly committed to being the World’s Greenest City by 2020, electric bikes still experience some remarkable policy and infrastructure challenges. For example – e-bikes have been banned from all Vancouver Park Board property since 2005, including dedicated bikeways and the entire 28-km. seawall system. This despite repeated studies showing they are no more dangerous or likely to be involved in a collision. And while the City of Vancouver installs electric car charging stations at community centres, shopping malls, beaches, parks, and other locations across the city (which offer a Level 2 charging outlet for a plug-in vehicle), they inexplicably neglected to offer – at nominal expense – a standard Level 1 outlet for an electric bicycle.

Once government agencies level the playing field, and provide the necessary incentives, the brakes are well and truly off for the impending e-bike revolution. Many car manufacturers, including Ford and BMW, recognize this inevitability, and are developing their own electric bikes for mass production. This, if anything, should tell us the e-bike is here to stay. We’re excited to see where it takes us.