In the United States, winning the majority of votes cast by the 328,000,000 citizens is not how someone becomes the president.

It’s the votes within the Electoral College that matter.

The Electoral College is a process, not a place, that stems from the US Constitution — it’s a compromise between a popular vote by citizens and a vote in Congress.

According to the Presidential Election Process, each state gets as many electors (read: votes) as it has members of Congress, plus its two senators. There are currently 538 electors, but they’re not distributed evenly across the 50 states. California has the most with 55, followed by Texas with 38. Several states, including Alaska, Montana, and Wyoming, only have three votes. 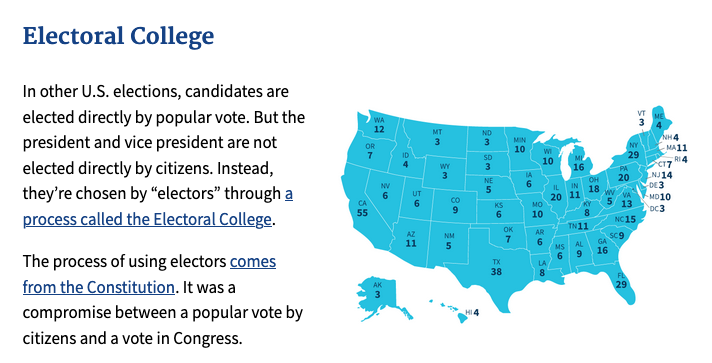 When Americans vote for a president, they’re really casting a ballot for the electors, according to the process.

The candidate that gets the majority of the 538 electoral votes wins the election. Those 270 votes are what will make Republican incumbent Donald Trump or Democrat Joe Biden president for the next four years.

In theory, Trump or Biden could win the electoral vote in only 11 states — California, Texas, New York, Florida, Illinois, Pennsylvania, Ohio, Georgia, Michigan, North Carolina, and New Jersey — but lose in the remaining 39, and still become President of the United States.

It’s also possible to lose the popular vote but win the Electoral College. That’s what happened in the 2016 election.

Election Day in the United States is November 3. The newly elected president and vice president are then inaugurated on January 20.

Canadians can watch the pandemic election on major news networks including CBC, CTV, and Global.