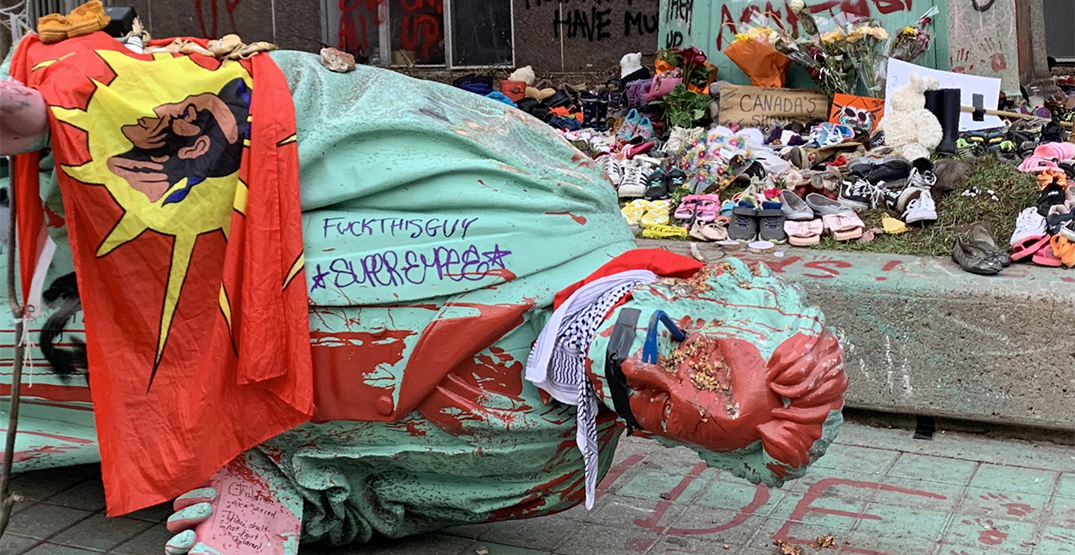 Protestors brought down a statue of Egerton Ryerson at the Toronto university’s campus Sunday.

The institution’s namesake was a man who is considered one of the architects of Canada’s residential school system. Calls to change the university’s name and rid the campus of the statue have grown since the remains of 215 Indigenous children were discovered on what was once the grounds of a residential school in Kamloops, BC.

In a statement Sunday, university president Mohamed Lachemi said that the Ryerson statue would not be “restored or replaced.”

“The question of the statue was only one of many being considered by the Standing Strong (Mash Koh Wee Kah Pooh Win) Task Force, whose mandate includes consideration of the university’s name, responding to the legacy of Egerton Ryerson, and other elements of commemoration on campus. Their work is now more important than ever,” Lachemi said.

Sunday’s protest began at Queen’s Park and proceeded onto Gould Street. About 1,000 people joined throughout the day. It was a peaceful demonstration, according to Lachemi.

Sometime after 6 pm, a protestor arrived with a truck, attached a chain, and pulled the statue down.

“We are relieved that no one was injured in the process,” Lachemi said.

After all the memos, briefs, newsletters, consultants, committees, surveys, questionnaires, and commemorative plaques — it turns out that all you really need is a chain and a truck with a hitch to take down a genocidal monument. pic.twitter.com/P7vVfGYVZX

Two campus publications have already removed Ryerson from their name, and many staff and students have taken to replacing the institution’s name with “X University” in their email signatures and social media in a show of solidarity with Indigenous students.

The committee examining the legacy of Egerton Ryerson is scheduled to present its findings in September.