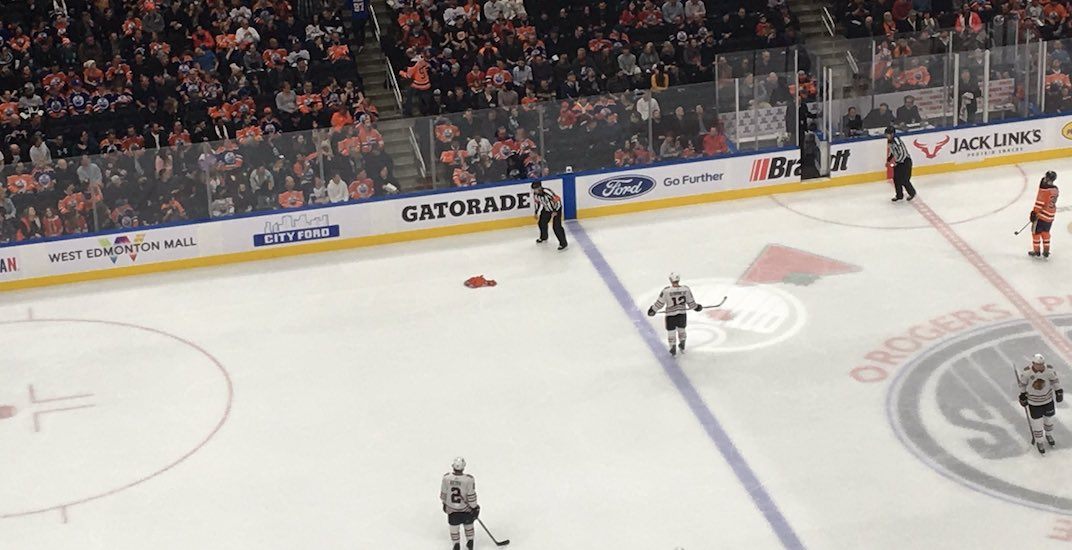 An old Oilers tradition was brought back to life at Rogers Place in Edmonton on Tuesday.

During an epic third period collapse on home ice which saw the Oilers give up five goals to the Chicago Blackhawks in under nine minutes, one fan had seen enough.

The team quit on him, so he quit on the Oilers by marching down to the glass and tossing his jersey on the ice.

It’s a protest Oilers fans became accustomed to during the tail-end of their 10-year streak of missing the playoffs, but the first time we’ve seen it happen in the Connor McDavid era.

Sweaters used to litter the ice with such frequency that Ben Scrivens once threw a jersey back into the crowd in 2014.

After making the playoffs in 2017, the Oilers didn’t come close to the postseason in 2018, and are currently three points back of the playoff bar. It’s an unacceptable position for the franchise to be, given they’ve been rebuilding for more than a decade.

There it is, the first replica jersey tossed on the ice in the 2018-19 season.#Oilers pic.twitter.com/eUs10hMCvD

Referee picking up Oilers jersey that an angry fan threw on the ice during #Blackhawks five-goal explosion. pic.twitter.com/gjf2djAOIX

Edmonton had a 2-1 lead heading into the third period but wound up losing 6-2 with one of the goals scored by former Oiler Drake Caggiula, who was traded in December, just to add salt to the wound.

Naturally, the reaction on Twitter was a mixture of anger from Oilers fans and snickering from the rest of the hockey world.

Things are also very ugly in Edmonton right now… jerseys being thrown on the ice after being scored on four times in the third period. #oilers #blackhawks

Is that a bird, a plane, Superman? No it’s an #Oilers jersey flying on to the ice.

Here’s the 2nd jersey toss of the night #oilers pic.twitter.com/SnUF7kQFgu

throwing your $100+ jersey ON THE ICE………..MID GAME. youve reached a level of fed up that cant be contained. that man is DONE with the oilers

The @EdmontonOilers deserve every boo tonight. People paid money to watch that fuster cluck. If I was there there could have been a jersey on the ice. It's clear this team does not have what it takes to being a winning team. #oilers #CHIvsEDM

Be pissed off with the Oilers if you want to, but DO NOT throw shit on the ice. I don’t care if it’s a beer, jersey, or anything else you have at hand. It’s unsafe and beyond disrespectful, and the team is penalized for any foreign object on the ice surface.

Get the Jersey tosser out of the arena. Banish him.

Fuck the clown who threw the jersey on the ice. If you don't want your jersey anymore, donate to someone who is in need of an article of clothing. #Oilers

I don't care how bad the hockey team you cheer for is….IMO you should never throw their jersey on the ice. #Oilers #PostGameShow on @TSN1260

Hey #Oilers fans, next time you think about throwing a jersey on the ice how about donating the $150 you spent on your jersey to #jumpstart instead? In cases like this, if you're gonna be an idiot, be a charitable idiot https://t.co/10apIgPJNW