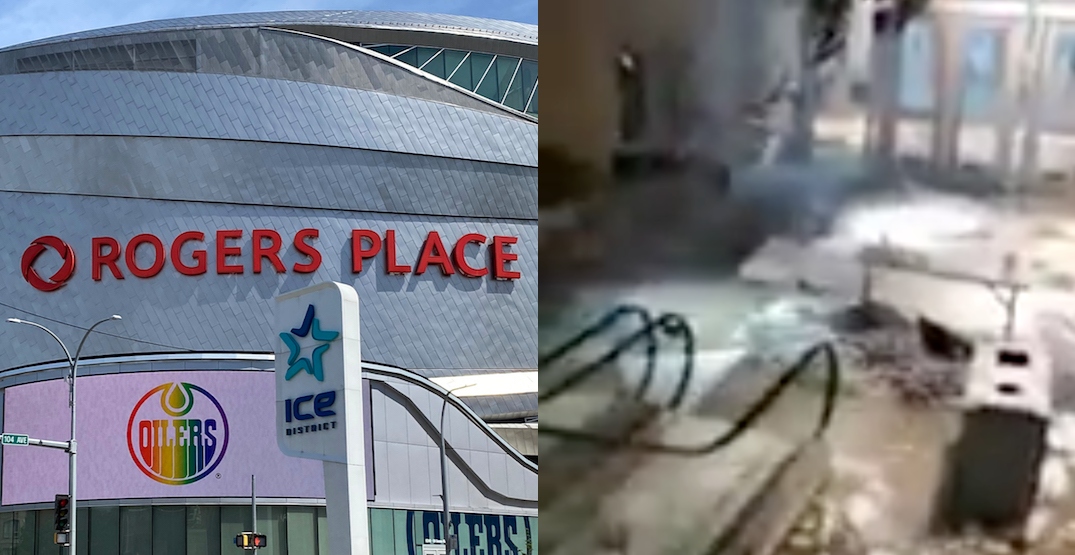 A Thursday night storm has caused water damage to interior of Rogers Place, the home of the Edmonton Oilers which is set to host NHL games in two weeks.

The arena experienced some flooding, as seen in videos shared on social media:

A bit of water underneath the winter garden at @RogersPlace. The main entrance where the majority of the flooding occurred was fenced off this morning. #yegdt #yegstorm pic.twitter.com/6gXSF6YGSi

Water damage was contained to two areas of the building, the Oilers announced, and the team said they don’t expect any “significant” delays related to NHL hub city preparations.

“After a thorough assessment of Rogers Place and associated facilities it has been determined the damage experienced last night was due to significant water flow mixed with hail, which led to excess pressure on the facility’s storm drainage system causing two pipe couplings to fail,” the Oilers announced through the official Rogers Place Twitter account.

“One was located above the terminus of Ford Hall and the other was located on the mezzanine level corridor on the southwest side of Rogers Place. The water damage is restricted to those two areas of the building, with the terminus experiencing more significant water damage.”

“Crews have begun work on the affected areas and we do not foresee any significant delays or barriers to either Oilers training camp or preparations and activities related to our hosting as NHL hub city for the 2020 Stanley Cup Playoffs.”

NHL teams will travel to the hub cities of Edmonton and Toronto in nine days, in preparation for the Stanley Cup playoffs. The 24 participating teams will play one exhibition game each from July 28-30, before the qualifying round begins on August 1.