EDM (Electronic Dance Music) is ubiquitous in music today. Musicians such as Kanye West and Damon Albarn have mined this genre to brilliant effect. Likewise, visual artists are starting to incorporate EDM into their art, with Kevin Schmidt being one such example.

His self-titled exhibition at the Contemporary Art Gallery reveals (among other things) the power of the EDM-visual art combo, and it succeeds in evoking an action that is generally not associated with this genre of music: contemplation.

The centrepiece of the exhibition is EDM House, and the best way to describe it is blissful yet sinister. The exhibit is located in a dark room – trance music plays in the background and a video of rustic houses located in a serene and stereotypically mountainous part of the BC Interior is projected onto one of the walls. It is winter, and the cold and the remoteness are absolute. Each of the houses is decorated with myriad lights that light up in sync with the music. However, the blissful yet sinister mood is not created by the lighting effects, but by the camerawork.

Schmidt follows the same formula when recording each of the houses: at first we see the house and its lights from a still angle, but then the camera begins to slowly pan from right to left, creating a slightly unnerving break from the calm and idyllic background. Then, it starts to slowly zoom in, and as you inch towards the house you begin to experience an impending sense of doom.

It is as if the domicile you are crawling towards is inhabited by some unnatural or malevolent force– and this is heightened by the juxtaposition of the illuminated house blasting EDM and the serene, natural setting. It is reminiscent of the Overlook Hotel from The Shining, in the sense that it is a building that is clearly harbouring some sort of supernatural force. But just as the true nature of the house is about to be revealed the camera begins to slowly (and deliberately) zoom out, preventing us from learning the truth. Unlike Arjuna, we will not see Krishna in his true form.

But does Schmidt believe that we are best served by not knowing the truth? Is he channeling Nietzsche and saying that we are like Oedipus, and it is best if the “veil of illusion” is never lifted? That is a question that only you can answer, and that requires you to visit this exhibition. I suggest you do so. 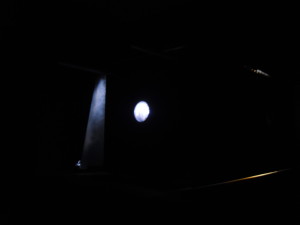