A fascinating study released by Nature Neuroscience revealed details on genetic imprinting. Rats were given a mild shock to the foot whenever the smell of cherry blossoms were emitted, which led them to associate the fruity smell with fear. That fear was discovered to be imprinted in the DNA of the sperm and passed on to their pups – who without any prior experience, were overcome by fear when they too smelled cherry blossoms.

I began to wonder if this is also true of humans, and if so, what are we capable of passing on to our children, and how are we manipulating their genetic makeup by our actions now? 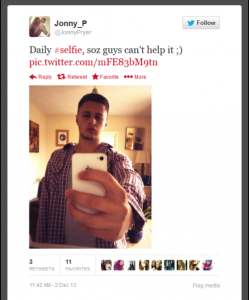 This past week CBC explored the “selfie” generation – the act of taking a photo of oneself, generally at arm’s length in the bathroom mirror. The discussion also included photo bombing (jumping in the background of a photo right before it is taken).

Our parents once understood the quiet nature of beauty. Self-obsession was polite maybe even private, instead of being a past-time. Their faces were only on display on special occasions. Often locked away in old photo albums with the year “1999” etched on tape at the bottom; most likely a baby photo.

Now our narcissism smashes down the door like a drunken relative, staggering around the kitchen looking for a full serving of compliments, and mistaking “likes” for love.

There is no place too serious, or sacred for a selfie, as realized with the recently trending “funeral selfie.” There are no secrets that are ours alone. It boils down to photographic evidence; simply put, if it’s not documented, it never happened. And yes, you basically don’t exist.

Yet, echoing from the depths of the Oxford dictionary – that recently announced “selfie” as its word of the year, we are forced to question the power of the solo pose.

For anyone who believes in self-promotion, the selfie should be celebrated as a marketing tool. In fact, it may be accurate to note that we are solidifying our existence. Burn books and blow up museums, but you will never erase the millions of selfies generated each day, reminding us who we are, what we do, that we are human and we are here. Think not of the selfie as a sign of moral decay, but the preservation of our existence.

Selfies string together the changing of our times, the fascination we have with our own image and how we want others to view us. It is an experience in self-awareness. We are not always sexy, or right, sometimes we accidentally dye our eyebrows blonde, and for some no amount of wine will dim the humiliation of the wedding slide show, but doesn’t it feel good to be remembered?

Much like smoking or tanning bed in the past, we may not know the effects of all we do now and how it will change those after us. The best we can do is sit down with our children one day when they are barely old enough to understand, take a deep breath and tell them about how to survive the birds, the bees and the selfies.