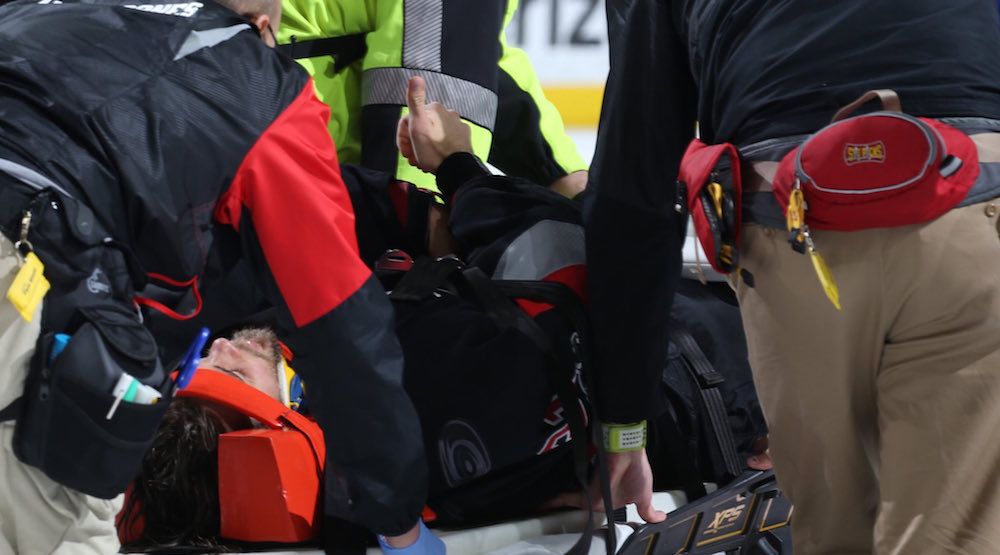 There’s a lot of concern for Eddie Lack this evening, as the former Canucks goaltender was taken off the ice on a stretcher in Carolina.

Lack was injured on the final play of the game in overtime, as Andreas Athanasiou made contact with the goaltender’s head/neck area as he scored the game winning goal for Detroit. Athanasiou appeared to be thrown off balance as he was driving to the net by the Hurricanes’ Victor Rask, who bumped the Red Wings forward towards Lack.

Here's the collision between Eddie Lack and Andreas Athanasiou that results in the Canes netminder being stretchered off the ice. pic.twitter.com/wL6VIQI6ya

The collision looked much more innocent than it was, as Lack fell to the ice in pain. He laid on the ice for several minutes.

Pretty surreal scene in Carolina. Both teams stay on ice to see Eddie Lack stretchered off after injury on game-winning OT goal pic.twitter.com/ZuYj5K9GQj

Lack’s teammates, as well as the Detroit Red Wings, remained on the ice until the loveable Swedish goaltender was stretched off and transported to UNC REX Hospital in Raleigh, North Carolina. Lack gave a thumbs up as he was being stretchered off.

Thank you for your thoughts and prayers as Eddie Lack is taken off the ice on a stretcher following tonight's game. pic.twitter.com/aOyMaTukF1

The Carolina Hurricanes gave an update on Eddie’s status at 8 pm PT, stating that he is undergoing tests in hospital. The media release also stated that Lack has full feeling in his extremities.

Eddie’s father Wille also passed along a message on Twitter for fans worried about his son:

Eddie is sending his great full thanks for your love and prayers from the hospital. ❤🇺🇸🇸🇪🇨🇦🙏

It’s been a difficult season for the (still) Canucks fan favourite. Losses, injuries, and a low save percentage piled up quickly this season. Then, just as Lack appeared to be turning things around, he was called out by his head coach.

Lack’s numbers were trending towards respectability this month, as his play had been superb. The 29-year-old netminder has a 5-1-2 record with a .920 save percentage in March, and was riding a four-game winning streak into Monday night’s game.

But at this point, hockey is clearly secondary. I think I can speak for everyone in wishing Eddie a speedy recovery.

Thanks for all thoughts and prayers🙏everything looks alright and I'll be able to go home tonight! Thanks for thinking of me👍