This event is usually won by up and coming stars so it’s always a blast to watch and see who might capture the trophy each year.

Billy Suede and Tony Baroni (who kind of looks like Ryan Kesler if we’re being honest) are both fan favorites, but Baroni is from Surrey, so if anybody has the upper hand in a brawl, I’m giving it to Surrey.

The match was a pretty even affair, with both guys showing plenty of heart (and punches, many many punches) but eventually Baroni pulled off the win. Never bet against parking lot style brawls when Surrey is involved.

Suede’s loss was sad news for one guy in the front row who had a Billy Suede sign proclaiming him to be the next Pac 15 Cup champion. The sign lied, Billy. It lied.

Vancouver’s own Artemis Spencer took on Mike Santiago in the second match up of the night, and was the clear fan favorite in the match. Not that Mike might not be a great guy, but his insistence upon pointing finger guns at the crowd did him no favors with the locals. There was also a healthy debate with one member in the crowd about how many ribs Mike ate the night before.

Spencer pulled off some high flying moves, viewing the ropes as nothing more than a mere obstacle as he jumped over them with delight (I don’t know if it was actually with delight, but I prefer to think Artemis has the time of his life when he’s in the air, singing the Aladdin song “A Whole New World” as he floats out of the ring).

Spencer eventually got the win, busting up Mike’s ribs in the process, which brought on round 2 of the debate with a fan about Mike’s ribs and his possible rib eating ways.

Andy The Dreadful Bird vs Bishop

Andy has a lot of hair, and a great t-shirt. 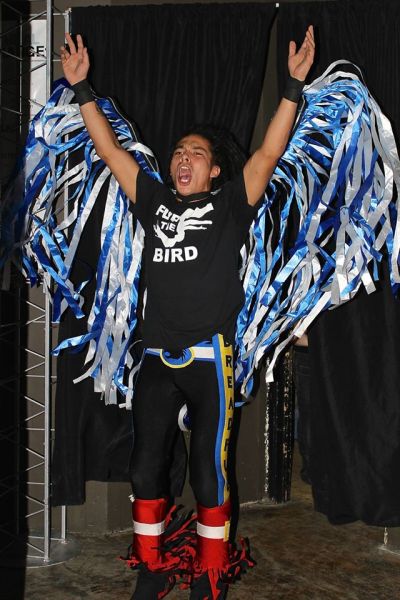 Despite this, and despite the fact he took the fight to two time, two time, TWO TIME Pac Cup champion Bishop early on, he just could not overcome the veteran wiles and brute man strength of the big man.

Another part of the reason he couldn’t beat Bishop was because Bishop’s newest friend Shreddz provided motivation the entire match, and defended his friend from verbal attacks from the crowd.

Honestly, one of the highlights of the night was watching Shreddz work the crowd, yelling at little kids, mocking adults, and wondering why one section of the crowd smelt like urine. He also took delight in telling Bishop that Andy was “just a bird” and to break both of his wings.

When you have that kind of motivational force in your corner, it’s pretty hard to lose. It helps when Shreddz interferes in the match too.

Also, Shreddz looked like a white version of the human form of Bebop from Teenage Mutant Ninja Turtles: 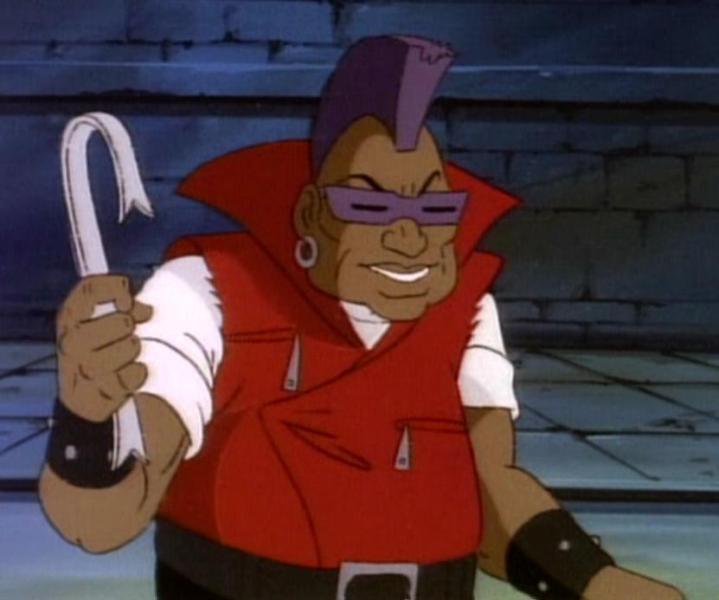 If anybody ever asks me “Why should I go see an ECCW show?” I scream “EL PHANTASMO” at them repeatedly. This guy just has that “it” factor. You could easily see him competing in WWE (assuming Vince isn’t allowed to hate him because he’s quick and athletic and not 6″8 and muscle bound).

He has great ring gear, an amazing entrance, and he tells a story in every match he takes. He also makes what he does look so incredibly easy, which is a sign of true talent. At one point he jumped over the ropes three times in under a minute, finishing the third crazy leap by landing neatly in a chair. It was bad ass.

Despite all of this, he ran into the unstoppable force of Alexis Plexis, who looks like he weighs 110 pounds, yet somehow has tiny tiny muscles all over his body. It’s really really weird.

Plexis, though, had the help of Cat Power and Kristopher Kassidy, who took every moment they could to distract El P, eventually leading to Plexis picking up the submission victory. 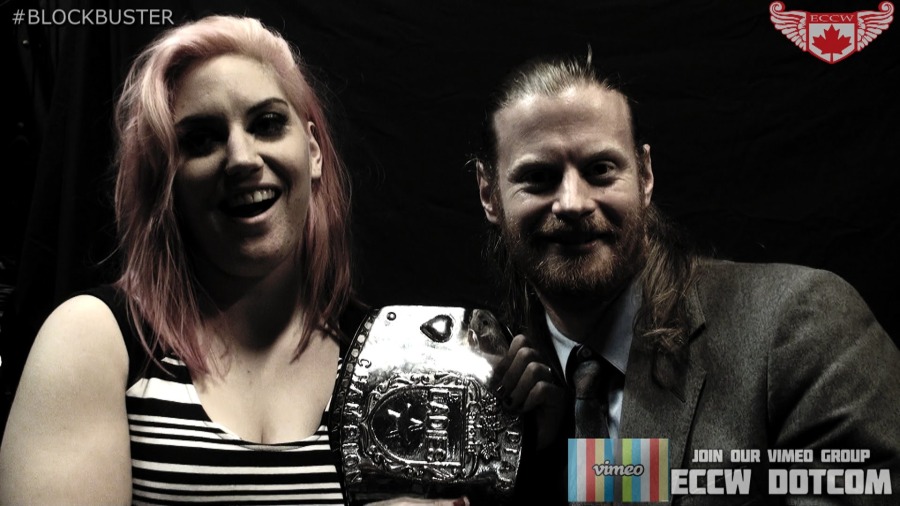 Cat Power and Kris Kassidy, pictured above, were quite pleased with themselves afterwards.

Tony Baroni, riding the wave of Surrey slaughter he had handed out in his first match, came out strong against Bishop.

Bishop, despite having Shreddz in his corner (who again, was doing his best to motivate his buddy), had a look in his eyes that spoke volumes about the direction of the match. It was the look of a weary man, a man who has won it all before, and now struggles to find his motivation to go on. Bishop needs a new mountain to conquer, and being a three time Pac Cup champion wasn’t motivation enough for him to win the match.

Another theory is that when the chant “Rainbow Tarzan” started up, it really hit home with Bishop, and he lost his smile. Sure, he danced to his entrance song “Turn down for what?”, but was his heart dancing as well? I don’t think so.

Baroni, possibly fueled by the thought of getting to beat up Alex Plexis, powered on to the victory over the broken shell of a man Bishop had become, much to the delight of the crowd.

I started off not being a fan of Plexis, but somewhere during the night, I started coming around on him. It might be because he has the best entrance song in ECCW, it might be because he always dances to the ring, or maybe it’s just because he really believes in himself. Either way, Plexis was on fire tonight, despite the crowd urging him to eat a sandwich, and taunting him for not being able to finish a salad.

Crowd favorite Spencer pulled out his usual high flying moves, but there was no stopping Plexis on this night, as he picked up the victory after a solid back and forth affair.

Oddly enough, Kassidy took some of the hardest bumps of the night, getting cut up in the process. Being the pro that he is, he simply found a rag to mop up the blood, and continued.

Nicole Matthews, the current reigning, defending, 1 in 21 and 1….wait where was I?

Nicole Matthews, ECCW Champ, took on Ethan H-D as she defended her title in front of a crowd of Matthew-holics.

Ethan, with the help of Mike Santiago, did their best to try and double team their way to a win, but the high flying Nicole gutted out yet another victory, maintaining her hold on the top prize in ECCW.

I maintain Ethan would have won had Shreddz been in his corner. Mike was not nearly as helpful as Shreddz.

The Cunninghams (Champs) vs Bollywood Boyz

The Cunninghams and Bollywood Boyz, both fan favorites, fought the match under the flag of sportsmanship. They hugged it out before AND after the match, which is always a sign of respect.

The Cunninghams, powered by the size and strength of Jack, and the speed and caffeine hating of Karl faced off against the team fueled by butter chicken. At one point the Bollywood Boyz screamed “WHO WANTS SAMOSAS??” and the entire crowd lost their minds. Eventually the crowd busted out a “Mango chutney!” chant. Signs you’re in wresting in BC, folks.

Despite a very even match, the Boyz looked like they had it won, when out of nowhere Nelson “Puffy Shirt” Creed ran in and interfered due to a past beef with all things Bollywood.

Nelson Creed mind you is somebody who likes to hide streamers in his junk, so you should have expected this kind of nonsense from him.

Winners and STILL champions due to DQ: The Cunninghams

Cat does not care for Nicole Matthews and wants to fight her. Again and again until she can beat her. Nicole Matthews is her white whale, as Cat has gone full Captain Ahab. Look for those two to mix it up at some point down the road.

By this point I was fully on board Team Plexis. His god damn entrance is so catchy. The highlight for me was when during his walk to the ring, a fan had a disparaging sign about him held up, so Plexis ran over to grab it. Alas, Plexis could not reach it, but he shook that off, and RESUMED DANCING TO HIS SONG. The guy is so god damn focused, it’s amazing.

Despite the pre-meditated attack, Baroni fought it off, and looked like he might have the match finished with a top rope move…but Plexis is a god damn strategist. He’s not going to lose to Baroni after he’s fought so hard to get here. He pulled the ref in the way of Baroni and avoided a sure loss. Kassidy then ran in, and Baroni, not as focused as Plexis, chose to target Kassidy instead.

Plexis used the distraction to nail Baroni with his finisher, and Cat Power woke up the ref with the ever effective “hey man, wake up” maneuver, and 1, 2, 3 Plexis was your Pac Cup 15 champion.

Stompa your feet, folks, Plexis is your Pac Cup overlord.