Four Vancouver taxi companies have partnered together to launch a new smartphone app that allows taxi passengers to reserve, pay and track their taxis – similar to the Uber ride-sharing app.

As of today, the eCab app is fully operational in Vancouver and permits smartphone users to order a taxi that is closest to them. The app pulls in the combined fleet resources of Yellow Cab, Vancouver Taxi, MacLure’s Cabs and Black Top & Checker Cabs to create a single online dispatching system for over 600 vehicles in the city.

With eCab, customers can see the estimated pickup and arrival times, order a cab for immediate service or pre-reserve a cab, select a pick-up address, provide comments to drivers, pay directly through the app (or cash or card), track their taxi on a map in real-time, and rate their driver instantly. When the taxi is near the pick-up address, an alert message is sent to the customers.

“eCab is focused on the customer, to make it easier, faster and more reliable to grab a cab in the city,” reads a press release. “You can still pay your fare directly to your driver but also with your card in-app and get a receipt at the end of your trip.”

“It is also very easy to book a cab for someone else or pre-book taxis, or request van or wheelchair accessible taxis.”

All four of the participating taxi companies already have their own online or app-based reserving system, but none of them are integrated.

Of course, the new app comes as an apparent measure to become more competitive and combat Uber’s plan to potentially launch its ride share service in the city.

Local taxi companies have been vehemently against any suggestion of an Uber entry into the Vancouver market due to the unfair competition it would bring, to the extent that they filed a joint lawsuit last fall against the multinational corporation. But the lawsuit was dropped earlier this year when Uber delayed the launch of its service.

Uber currently operates in over 200 cities and was recently valued at more than US$50 billion.

The Paris-based eCab app launched its first city service in 2014 and has since expanded to 10 other European cities, including Amsterdam, Brussels and Dublin. The Vancouver service is the company’s first Canadian city and it is also looking to expand to other markets in 10 other countries.

The app is available for free on both iOS and Android devices. 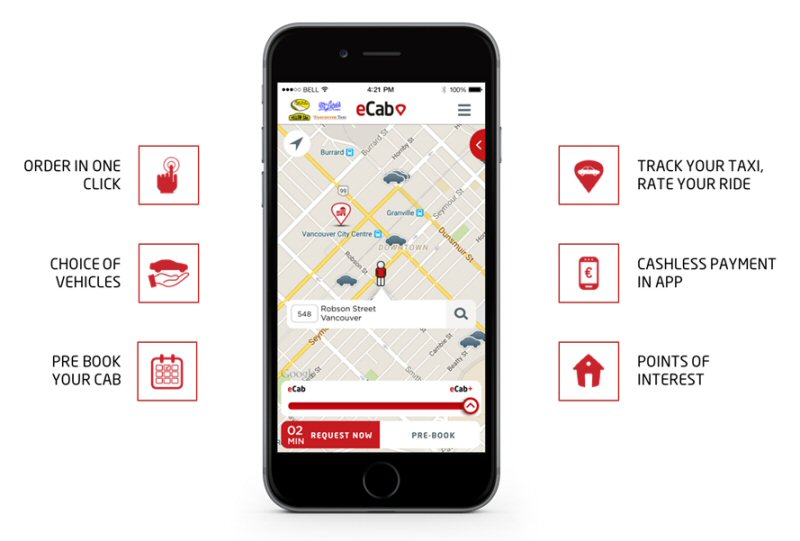