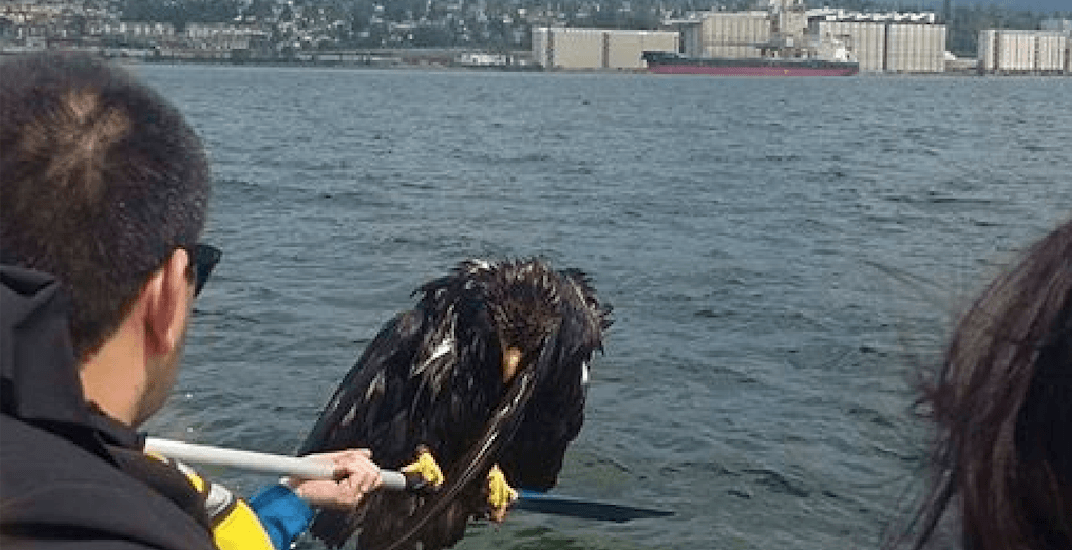 It was an an up-close-and-personal experience that Carolyn Walker likely won’t forget.

On Wednesday afternoon, Walker decided to do a tour with Vancouver Water Adventures and boarded a boat bound for Granite Falls.

While that tour in itself offers plenty to see, it was less than an hour into the trip when the day became especially memorable.

“We had just left and we were on the water looking at a big barge,” Walker told Daily Hive. “We were going around it when we saw this eagle floating in the water, looking like it was struggling a bit.”

At that point, Walker said, one of the guides on the tour determined the bird – which also appeared to be injured –  wasn’t going to be able to get itself out of its predicament.

“The bird was completely soaked and all of its feathers were wet,” explained Walker. “It looked to be in a bad way – sort of like it was trying to fly out, but didn’t have anything to get it off on a good start.”

Wanting to help, but aware they were dealing with a wild animal, Walker and the other 11 people on the ship pondered what to do next.

“The driver was really good and asked if anyone had any ideas on what to do,” said Walker. “He ended up grabbing one of the oars and one of the guests hung with the oar trying to get it under the eagle, while two other people held on to him so he wouldn’t fall out of the boat.” 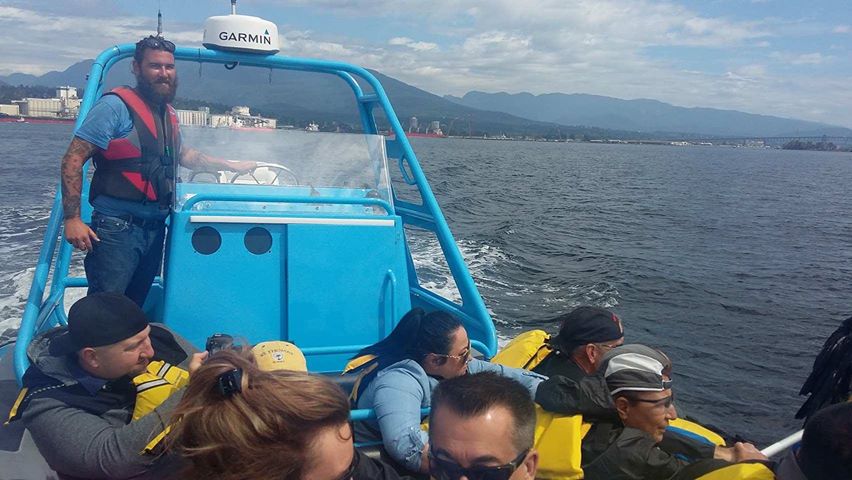 The boat tour group that helped rescue an eagle from the water. (Carolyn Walker photo)

The eagle grabbed on to the oar and was “completely calm,” Walker recalled. “It didn’t panic or anything; almost like it knew it was being rescued.”

The bird did however, “cling to the oar for dear life. It looked like he was really concentrating on hanging on.”

At that point, the boat’s driver took the boat to shore and phoned Conservation services.

After explaining where they were and being told by the service the bird would be looked after, Walker’s boat tour continued on its trip.

About halfway through the remainder of the trip, Walker said, the driver got a text message from a Conservation Officer that the eagle was going to be okay.

“We were really pleased with ourselves and were like, ‘We saved it!'” said Walker. “The guide told us that was going to be hard to top.”

Reflecting on the incident, Walker had kind words for the boat’s driver as well as the other passengers.

“The guide was really professional,” she said.

“Everyone on the boat was supportive of each other and it was just a nice experience to be a part of.”