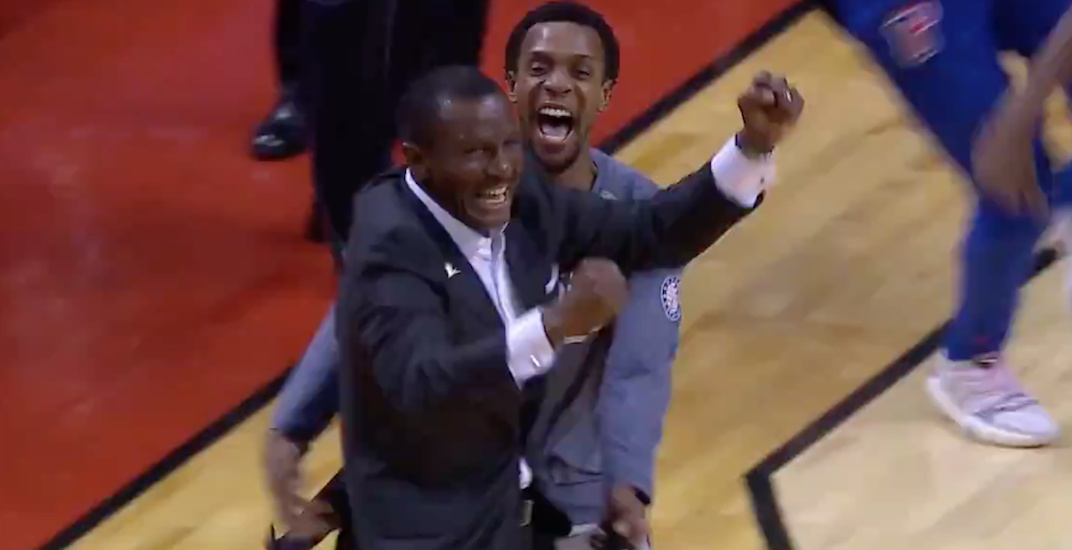 For the first time since Casey was fired last summer, fans had a chance to show their appreciation to the man that helped build the Raptors into one of the top teams in the Eastern Conference.

Before the tip-off, fans rose out of their seats to give an impromptu standing ovation to the Raptors’ winningest coach during the announcement of the starting lineups.

Raptors fans give Dwane Casey a standing ovation in his return to Toronto. pic.twitter.com/FMjQ9A5pwg

During his time in Toronto, Casey led the Raptors to a 320-238 regular season record with 19 playoff victories and five straight postseason appearances. Last year he received the honour of coaching in the NBA All-Star Game and being named NBA Coach of the Year after leading the team to a franchise-record 59-win season.

Casey received his second standing ovation of the night during the first quarter. The Raptors aired a video tribute on the scoreboard that had both players and fans on their feet in appreciation.

The @Raptors welcome Dwane Casey back with a standing ovation in his return to Toronto! pic.twitter.com/3yqj5HWs9c

Casey appeared to be genuinely moved by all the love and admiration.

Casey on the standing O: "I really appreciate that. Some of the best fans in the world. I’d put them up against anybody. I said that when I was here, said that when I’m coming back. They’re loud. They’re passionate. They love their team."

What started off as a night to celebrate all of Casey’s accomplishments in Toronto slowly turned into a revenge game from Casey as the Pistons chipped away at a Raptors lead that was as high as 19 points.

As Raptors fans experienced time and time again in previous years, Casey kept his cool and made sure the Pistons didn’t lose focus in the second half. Throughout the game Casey was constantly moving up and down the bench while barking orders at his players to make sure they were in the right position.

The result was the Pistons making a comeback that saw them outscore the Raptors 29-16 in the fourth quarter and getting their first lead with under five minutes remaining in the game.

From there the basketball gods seemed to be on Casey’s side.

With two seconds remaining and the game tied at 104-104, Kawhi Leonard turned the ball over off his foot, giving up possession to the Pistons. Reggie Bullock hit the game-winning shot with 1.2 seconds left to secure the win for Casey and his new team.

Dwane Casey’s reaction to the Pistons last second win over the Raptors pic.twitter.com/AmHanSQtHz

As the final buzzer sounded it was obvious how much the win meant to the usually stoic Casey, as he rushed onto the court to celebrate with his players. For the Raptors and their fans, the game was a painful reminder of the kind of coach Casey is and why he was named the team’s head coach back in 2011.

Based on how this game went, there will be no love lost between the two teams when they play each other again in Detroit on March 3.