SkyTrain’s Commercial-Broadway Station will be receiving a major $60-million overhaul to increase its capacity in time for the 2016 completion of the Evergreen Line.

The station at the intersection of Commercial Street and Broadway serves both the Expo and Millennium Lines and is a major transfer point for the 99 B-Line rapid bus and some of the city’s busiest trolley bus routes.

Serving 90,000 station trips per day and 60,000 bus trips per day, the station is the busiest on the entire SkyTrain network and is frequently overwhelmed by its high passenger volumes leading to overcrowding. Station circulation upgrades are critically required by 2016 when the opening of the Evergreen Line is expected to increase Commercial-Broadway Station’s passenger flow by 25 per cent.

Cnceptualizations depict the demolition of a portion of the Safeway to build a fourth platform serving the inbound direction into downtown Vancouver.

The new platform will allow for the implementation of the “Spanish Solution” also seen on major transit systems elsewhere in the world. This new configuration will permit doors to open on both sides of the train, allowing passengers to embark and disembark at the same time and reducing crowding in the process. It could also potentially reduce journey times as longer train dwell times at the platform will no longer be needed.

Cross-section of the future Commercial-Broadway Station, with new additional platform. 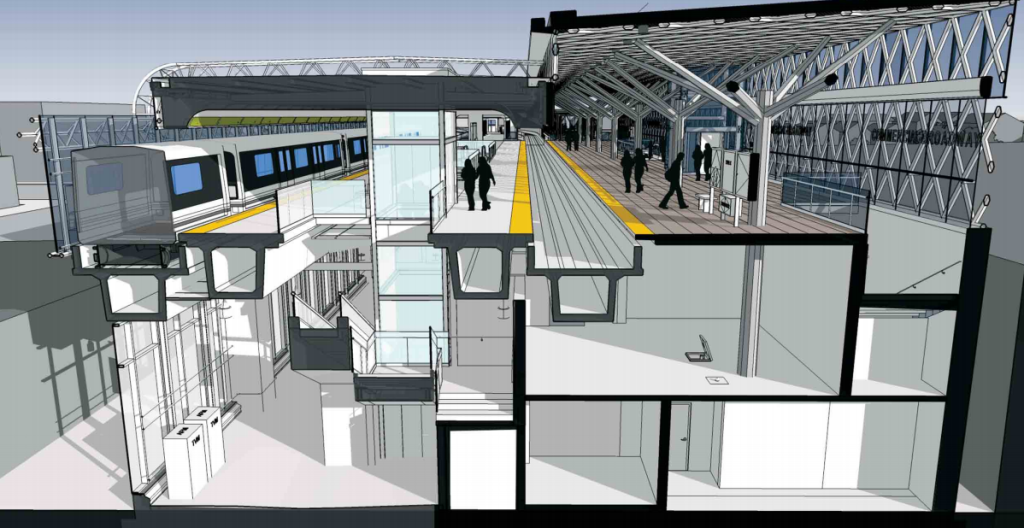 In addition to the fourth platform, a new second pedestrian overpass will be built over Broadway and the one-storey tall Shoppers Drug Mart building to establish another footpath transfer connection to the 99 B-Line rapid bus stop and north station platforms serving the Millennium Line and future Evergreen Line. 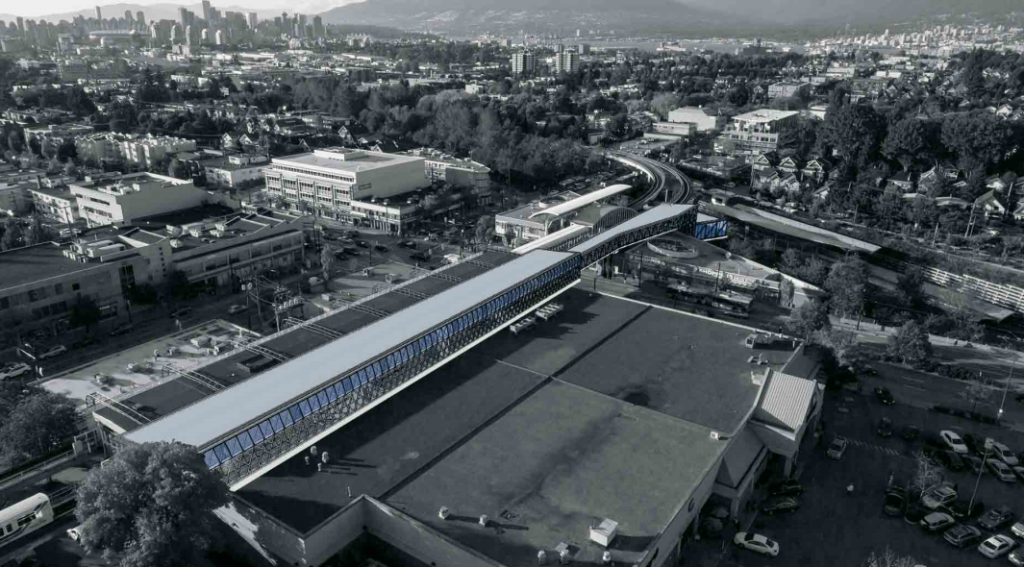 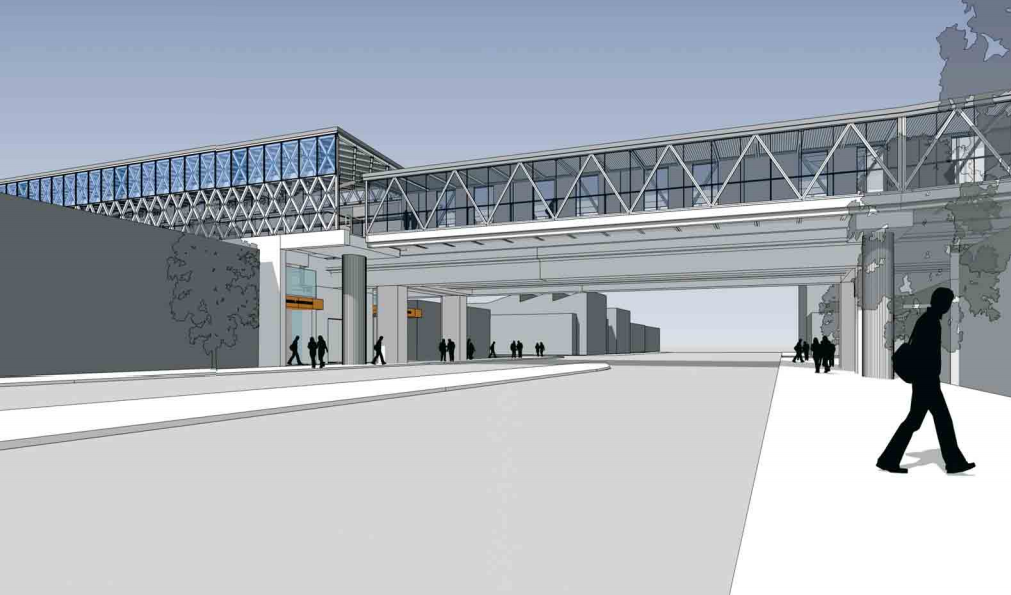 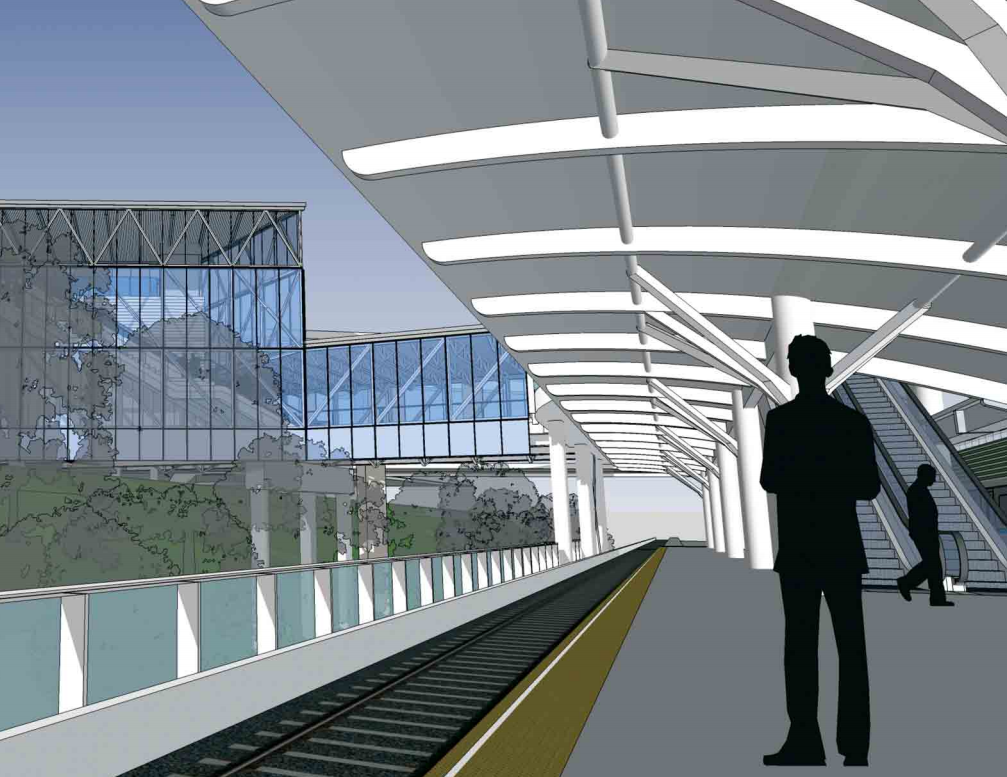 Choke points and long escalator and staircase queues are highly problematic, especially along the existing, narrow pedestrian overpass between stations.

Other improvements will include the widening of the walkway that provides access to the north station platforms, an expanded ticketing concourse for the south platforms, widened 10th Avenue and Broadway entrances to the original Expo-era station structure, a new bike storage room to accommodate 50+ bicycles, new retail spaces, and the replacement of mesh panels with glazed panels at the level of the south platforms.

Commercial-Broadway Station received its Phase 1 upgrades prior to the 2010 Winter Games which involved a new 10th Avenue station entrance, new glass walls at the ground level, and the relocation of the elevator at the north end of the station to the south end of the station to eliminate the choke point at the entrance of the pedestrian overpass.

The proposed upgrades for the coming years are deemed as Phase 2 of the station’s improvement project and will follow a development schedule pre-determined by senior government funding timelines.

Construction is expected to begin in early-2015 for a summer 2016 completion, prior to the Evergreen Line’s scheduled July 29 opening date.

Funding for the $60-million upgrade and six other station upgrade projects has already been approved as a part of TransLink’s 2014 Base Plan. TransLink will cover 41 per cent of the Commercial-Broadway Station upgrade costs while the provincial government will contribute 39 per cent and the federal government with the remaining 20 per cent.

The provincial and federal governments are contributing up to a total of $123.6-million for all seven station upgrades on the Expo Line. This also includes funding for the ongoing revitalization of Main Street-Science World Station and this year’s coinciding massive upgrade of Metrotown Station. 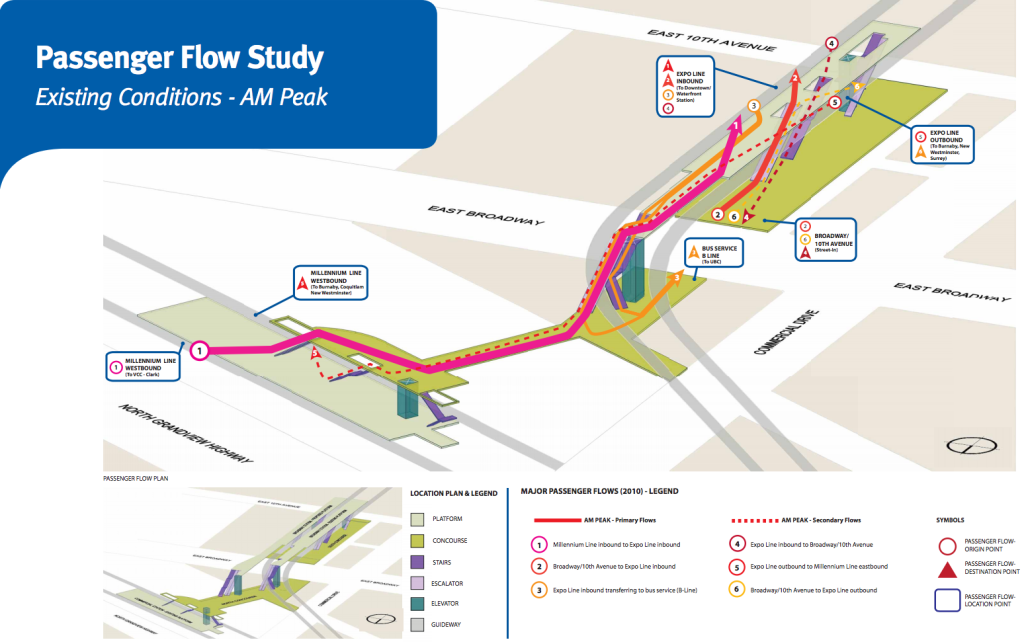 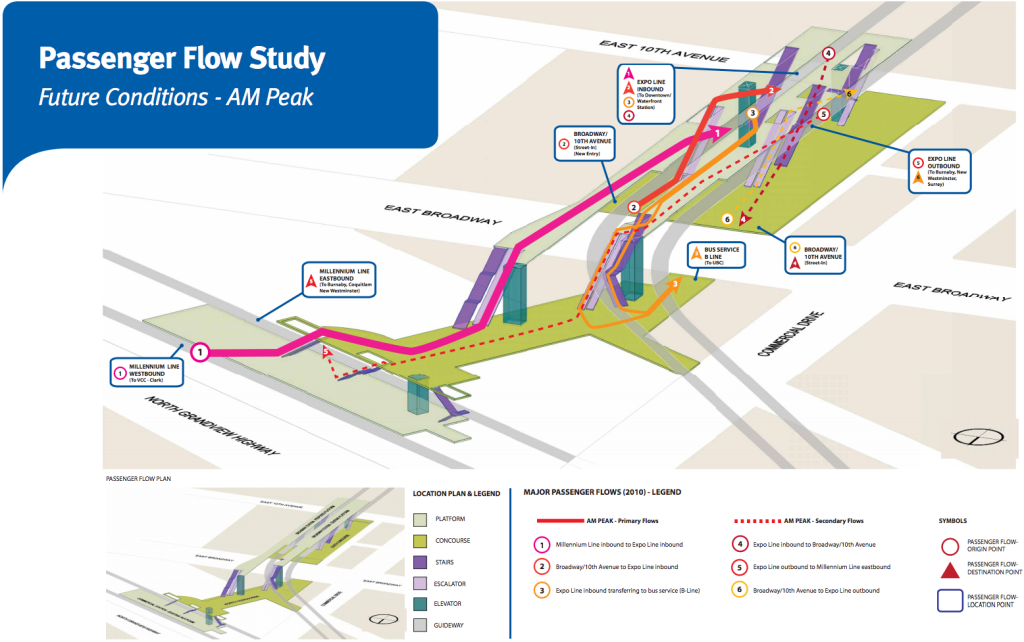 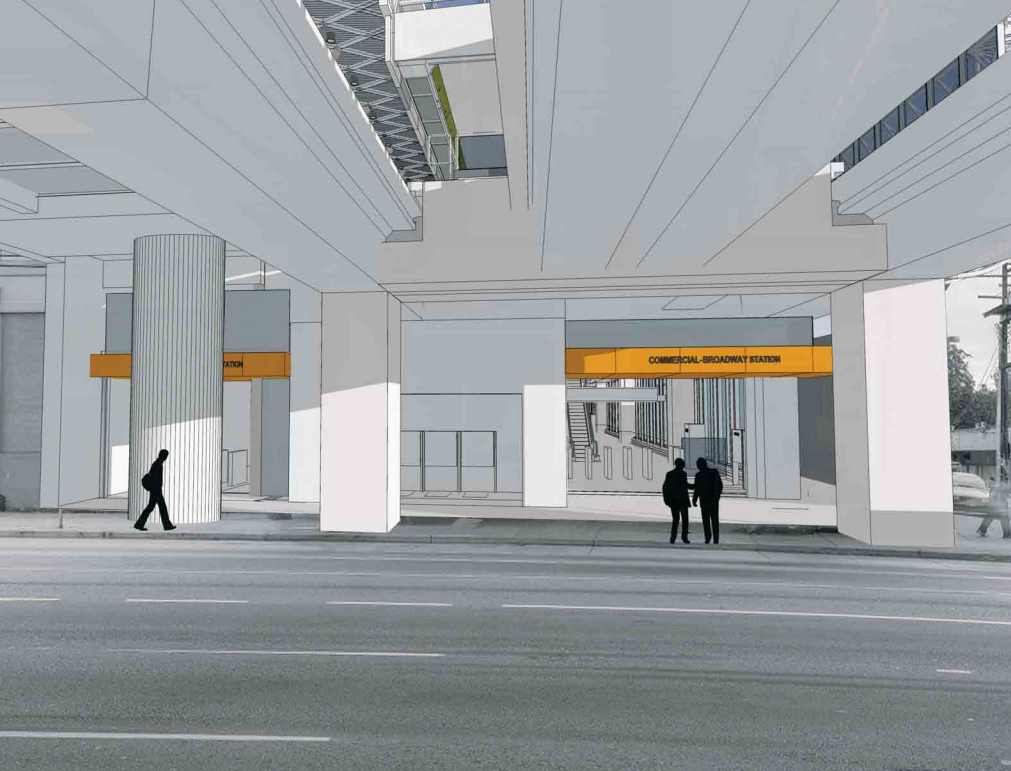 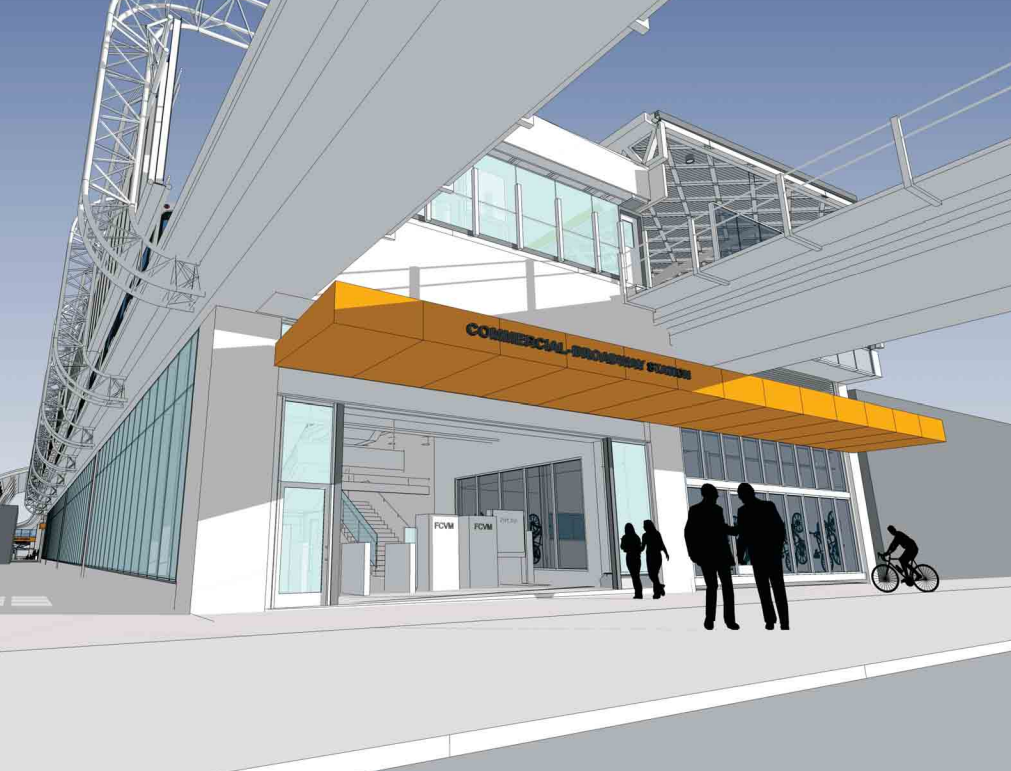 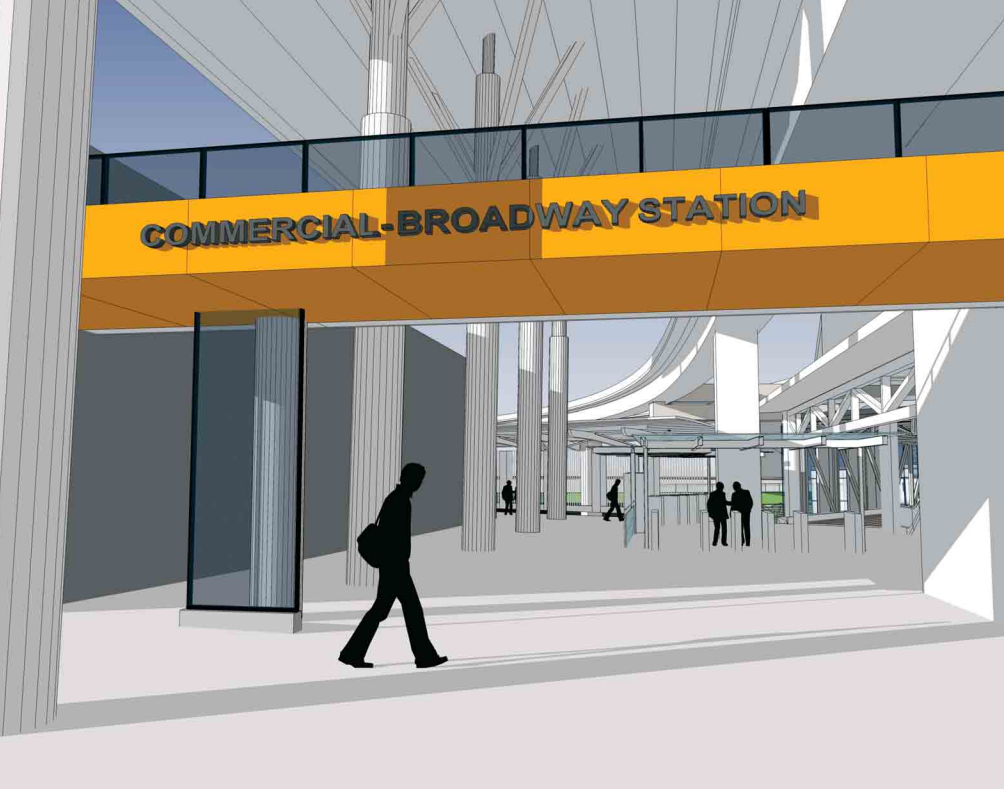