Purebread Bakery has been open in Downtown Vancouver on the outskirts of Gastown for a few months now, but recently people have been talking about one particular treat they sell there: Crack.

The controversy seems to have begun when a customer confronted the Purebread staff about their Crack. Things picked up online via a Reddit thread suggesting that the dessert was so-named and marketed because of Purebread’s proximity to Vancouver’s Downtown Eastside, known for its population of drug users. 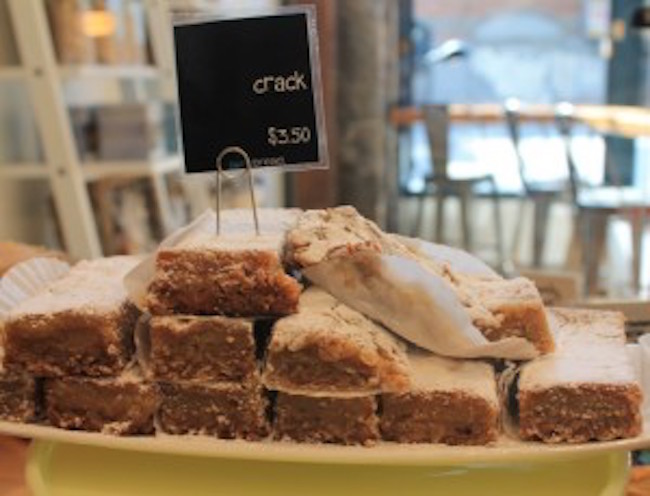 Since the Crack was on the table, so to speak, it seemed appropriate to set the record straight, and, perhaps, inject some contemporary food history into the conversation. Because, as I’m only a tad sorry to say, Crack the dessert wasn’t invented in Vancouver. And it’s been around for a few years.

Crack Pie is the creation of famed New York City pastry chef Christina Tosi, owner of the celebrated Milk Bar. Milk Bar, which launched in 2008, is an offshoot of David Chang’s Momofuku, and Crack Pie one of Milk Bar’s signature dishes (along with Cereal Milk Soft Serve and Compost Cookies). 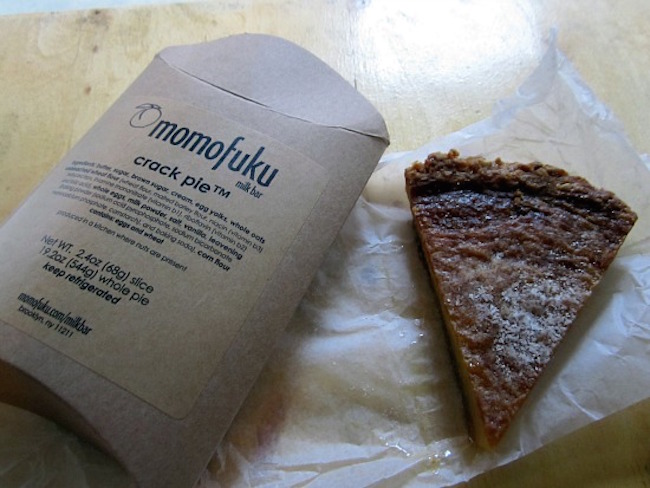 The recipe for Crack Pie isn’t a secret, either. It’s been published online, and also appears in Tosi’s Milk Bar cookbook.

“We tasted this pie recipe and, holy smokes, it was sweet and addictive. So we decided to change the base,ease up on the sugar, and sell it by the bar,” explains Lamming. “How anyone can get through a whole slice of pie is beyond me, you would truly have to be a sugar addict.”

Purebread has been peddling their “Crack” for sometime now, too, long before the Downtown Vancouver location was a reality. “We have been selling our version since we began at the Vancouver Farmers Markets and at our shops in Whistler,” says Lamming.

Lamming also points out that she and the Purebread team are not being cavalier about the perils of drug use in Vancouver with their baked goods. “In no way are we trying to be insensitive or make light of the situation in our neighbourhood, and we believe everyone is entitled to their opinions,” attests Lamming. “We are fully aware of the hardships in our area, and we pass on most of our unsold products to DTES shelters. We also donate a huge amount of product and gift certificates to many charities in Whistler and the Lower Mainland.”

Purebread also takes a playful approach with a couple of other baked goods on their menu and what Lamming calls their “tongue in cheek names” many of their customers love.

“We also sell a Drunken Apple Blondie (loads of brandy) and an Adults Only Cookie (we thought this is only a cookie that an adult would like),” points out Lamming, noting that the “green stuff” in the Adults Only Cookie features the more adult-friendly flavours of rosemary and sea salt.

“We are fair to kids as well and offer a Kids Only Cookie, complete with marshmallow, chocolate chips, sparkles, candy and the like,” adds Lamming. “And of course our Pudgie pies–if you eat one too many of those they will certainly make one a little pudgy.”

So, please, take Purebread’s delicious grains of sugar with a grain of salt, and remember that they are, after all, a bakery. Everything in moderation is the best recipe. Even when it comes to Crack…the dessert.