On Saturday, Douglas Coupland’s Gumhead, a chewed gum public art sculpture, will be officially unveiled outside the Vancouver Art Gallery on Howe Street.

Over the summer months, the public is invited to morph the 7-foot tall self-portrait of Coupland’s own head by sticking their chewed gum onto the sculpture.

Chris von Szombathy published an open letter (below) last week, writing that striking similarities exist between the concept and execution of his work and Coupland’s upcoming piece.

In an email to the National Post, Coupland flatly denied the allegations and wrote: “I haven’t been aware of Chris von Szombathy until this email… it feels a bit strange and dreamlike to receive.”

He added that some of his previous works utilized chewed bubble gum, including one piece eight years ago that featured desks covered in gum. He has also created several larger-than-life statues of people, such as the series of four statues that memorialize Terry Fox outside BC Place Stadium.

Two years ago I produced a piece called “You Complete Me” with another local artist named Drew Shaffer. In short our piece was an analogue of a human head about 3.5 feet tall on a 4 foot tall stand, that required gallery patrons to help complete it by chewing a vast amount of bubble gum we provided and sticking it to the head. The piece was first shown at Catalog Gallery in Gastown, then later at Gallery Gachet and finally at Chapel Arts. We received funding to make the piece from the Vancouver Foundation via the Downtown Eastside Small Arts Grant. 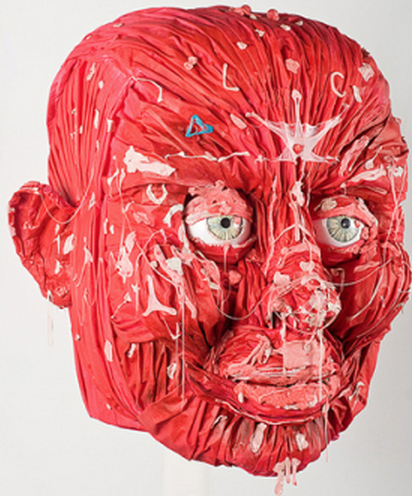 The piece was extremely successful for us. We went through around 1000 pieces of gum. It, in many ways, really did condense both of our sensibilities and skills requiring our collaborative effort to bring it to fruition. It was an arresting visual, an interesting narrative and, most of all, fun.

I cannot claim that Douglas Coupland was aware of our piece when he had his constructed. To say outright, “this piece is stolen work and it was stolen from us”, cannot be substantiated. However I wouldn’t be writing this if the similarities, both in concept and execution, didn’t strike me in such a way. That way being, of course, that it appears as though the piece we made and presented has in fact been re-made and re-presented by someone else.

Without factual knowledge of a specific transgression the result is purely speculation. Concepts can be zeitgeist. Apparent simulation can be parallel evolution. You know what they say about great artists and theft after all. Perhaps we should, as some have advised us to do so, take it as flattery. After all, they say, we know the truth.

But we don’t know do we? And we probably never will know. A direct statement would receive a direct denial. And, in fact, that may be the case: he may not have known. Or perhaps it wasn’t his concept after all. Maybe it came from someone contained in the fold and was passed up hand over hand until the actual genesis of possible thievery became untraceable. Who knows?

Let us suppose then that it is as a case of bats and birds: flight by independent evolution. Then by all means it is surely amazing. It is stunning to see a concept we also love, and laughed over, and built, and watched people enjoy come to light in a fashion that we could not possibly afford. In a way that is going to touch more people then we could have hoped for: out of the galleries, onto the streets, the way we wished it could have been ourselves.

On the other hand, if it is truly a large fish eating its own fry, if it is truly theft of a work of art remade by dirty hands then Drew and myself have been robbed of our chance to share our work again in a broader context.

Just to be clear, we’re not in the position to do anything about this. I’m not sure I would even if I could, though the suggestions have been numerous and full of life. But now we have a piece of public art that, because of what it is, I feel locked out of the conversation on. It is as if whatever I choose to say must be a request rather than an observation. As if everything is veiled. I’ll ruin everything if I open my mouth. I must want vengeance. Or credit. Or worse.

Of course I am afraid of saying anything critical. Maybe I should say nothing because sometimes having had your say means having had your fill. Isn’t it possible that I’ll be seen as someone defined by bitterness? Or that in voicing how I feel I somehow point to a deeper sense of lack within myself? Of course. And, yes, I am angry. At circumstance. Chance perhaps. But I do understand that fear and anger are usually misplaced and often misaligned. They are attributes that behave only for themselves. But, in light of all that, I’m being asked so I’m going to answer: I don’t want anything. I know that doesn’t satisfy a hundred begging questions but that’s what I want. His piece is now tied to ours and nothing can be done about that. If it deepens some dialogue then I think the trade-off is worth it. Values, truths even, are flexible with enough pressure applied to them.

You can’t afford to put a fence around ideas, as an artist or otherwise. I think it condemns the soul if there is one. People always say “everything has been done” but that is just not true. Our context is always changing even if our fears stay the same. I can’t lie and pretend that the coincidence doesn’t offend me. I may avoid the grounds that it lies on or walk around the block entirely but I feel its gravity. I feel it right now: disappointment in something intangible that might rust my optimism like mental arthritis. But even if you’re grossly offended that doesn’t make your opinion correct or avoidance not simply avoidance. I’m still fairly young, I guess I’ll see how I dealt with that on my way out.

So our piece, his piece, how does it stand for me now? I’m unsure. I love the idea still. He made a beautiful object, it should be enjoyed. I cannot even say “let the public decide!” as I feel that would still put me into a place of somehow feeling righteous. Like my opinion matters more than yours. Like I have to make sure you put the piece into my context continually. As if you’re not seeing the real picture. That doesn’t make sense. It is what it is. The concept still works. It’s just… more expensive.

For some people I’m sure it’s just a gross eyesore no matter what it’s for, no matter why or, at the very least, who created it. I’d say, “just think about the idea. Just look at what it’s doing. You are presented with this idea, you have this context: that’s everything in art.” You make the piece. You’re right. It doesn’t matter who made it. You make it in your mind.

Did he have the idea? Did he see the context? Only he knows for sure. How well he sleeps might be the only indication.