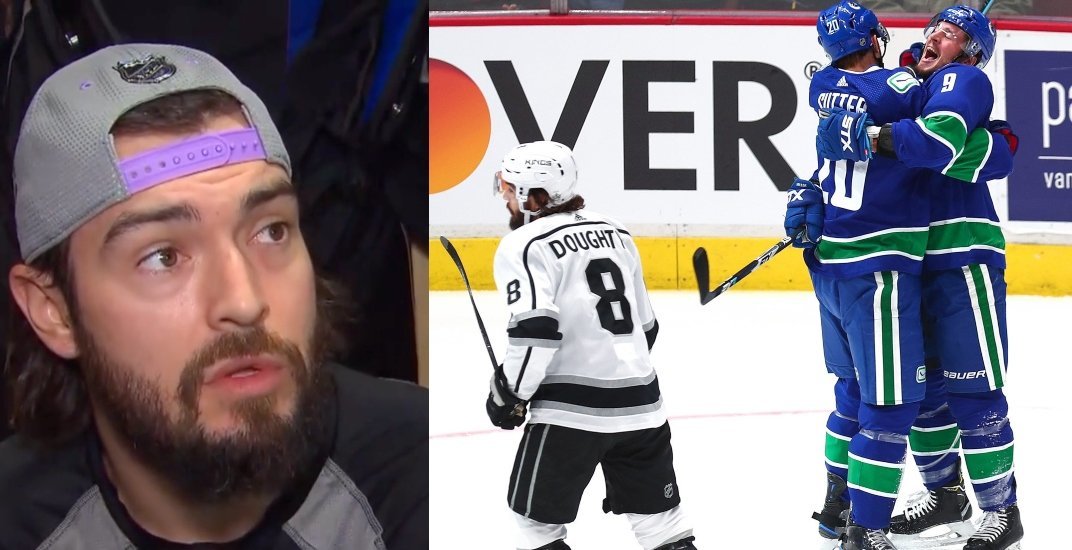 Los Angeles Kings defenceman Drew Doughty had no idea what he started when he blurted that out following a 8-2 drubbing at the hands of the Vancouver Canucks on opening night.

It sparked a brief online debate among some LA and Vancouver reporters on Twitter, with TSN 1040’s Blake Price being accused of misquoting Doughty.

The quote, while paraphrased slightly, was in no way altered in such a way that it changed the meaning, though.

Doughty on an 8-2 loss to Vancouver: "A team like that should not be beating us like that"

“I mean, I ain’t going to park it. It’s just embarrassing. I mean, a team like that should not be beating a team like ours 8-2. There’s actually no way. I know they had a lot of energy right off the bat because it’s their home opener and they had their whole ordeal with the captain and whatever. But we had chances to come back, and then we just gave up a goal right after we scored a goal. It was a bad team effort by everyone on this team, I thought.”

Most fans, local media, and even Canucks players seemed to draw similar conclusions from those words.

And he’d be excused for feeling that way. The Kings have been an elite team for a long time, winning the Stanley Cup in 2012 and 2014. He’s used to winning.

The Canucks, meanwhile, have been a cellar dweller, finishing out of the playoffs in five of the last six seasons.

Bo Horvat said he and his teammates “absolutely” heard the Doughty comments, adding: “I think we’ve proven to him, and we’re going to continue to keep proving we’re a great hockey team.”

In Toronto for a Tuesday night game against the Maple Leafs, Doughty was asked about his opening-night comments.

“The guy’s an idiot that made all that happen,” Doughty said. “What I was trying to say there is they’re a young team, we’re an old team. We lost a game [8-2]. That’s just ridiculous for a veteran team to lose that bad to any team in the league, not only a young team. That was what I meant by those comments.”

That may have been what Doughty meant, but it certainly wasn’t what he said. So given no members of the Vancouver media are adequately trained in mind-reading, you can understand why they ran with the quote.

Drew Doughty feels Vancouver media twisted his words last month. He made small waves in Toronto yesterday: "If you guys wants us to be able to say things and be honest with you and then you're going to go run with it and just get attacked by it, we're just going to stop talking."

Here’s the thing about Doughty’s comments. Nobody’s really attacking him.

He gave an honest answer — an understandable one at the time — but one that looks hilarious in retrospect.

So the Canucks are having fun with it, producing “Team Like That” T-shirts for fans to enjoy.

Whether Doughty meant what he said doesn’t really matter at this point. It’s not about him anymore. It’s becoming a rallying cry for Canucks fans who are hoping they really do have a “team like that.”