Double-decker buses are best known for their novelty and tourist appeal, but could they also be used to alleviate some of Metro Vancouver’s public transit capacity issues?

The iconic, two-level buses are found worldwide and its application as a mode of public transit is near-universal in cities like London, Hong Kong, and Singapore.

However, within North America, double deckers are nowhere near as common – a vast majority of the continent’s public transit operators have opted to use single-floored vehicles, although there are some exceptions namely Las Vegas, Toronto, Ottawa, Seattle and Victoria.

Double-decker buses are not used on TransLink’s fleet of 1,400+ bus vehicles given that articulated buses (long buses with two rigid sections linked by a pivoting joint) already fulfill the challenge of servicing routes with high ridership, such as the 99 B-Line. 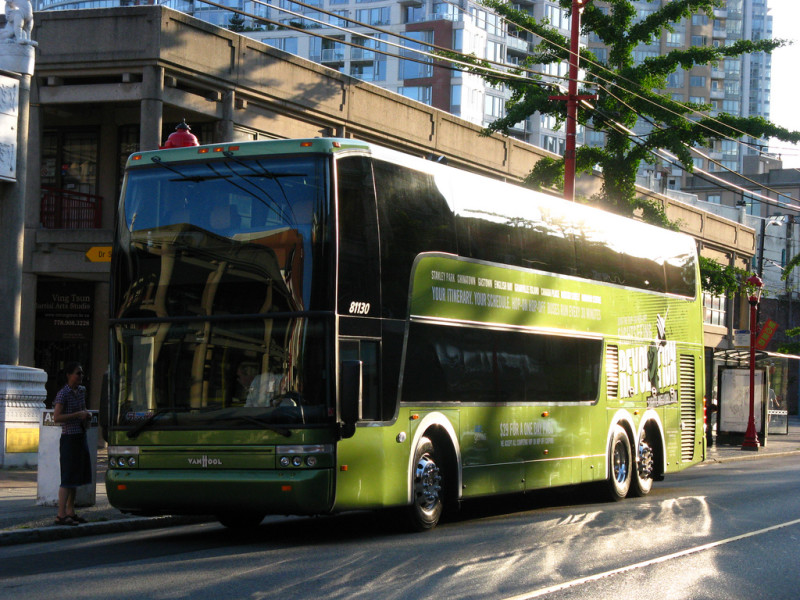 In essence, double-decker buses can provide the same passenger capacity of an 18-metre articulated bus, but within the road space footprint of a single-floored bus which could help alleviate road congestion. They can be designed with two staircases (minimum of one near the front and the second near the rear) and either two or three doors to mimic the access to an articulated buss.

“A double-decker has the same ‘footprint’ as a conventional single deck but, of course, carries twice as many people – and passengers simply enjoy the new experience,” said Bill Simpsons from UK-based Alexander Dennis Limited, one of the world’s largest suppliers of double-decker buses. “Double decks are all about ‘winning back space’ in congested city environments and improving the passenger experience.”

They also have a turning circle similar to a single-deck bus, one that is far more manoeuvrable than articulated buses and makes accidental damage with adjacent vehicles and structures less likely. 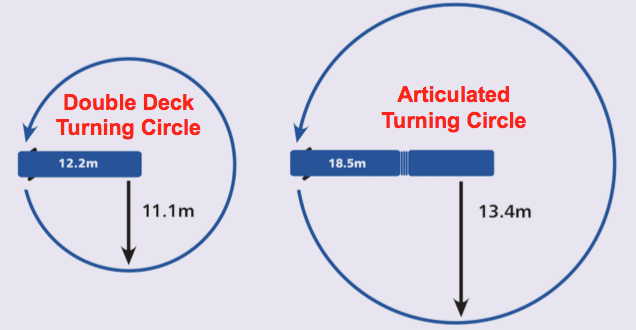 The large turning circle of an articulated bus was a major safety issue for London’s short city blocks, narrow streets and small intersections – it partially explains the British capital’s affinity with double-deckers.

“These writhing whales (articulated buses) of the road have swung their hefty rear ends round our corners for the final time. Pedestrians that leapt, cyclists that skidded and drivers that dodged will breathe easier this weekend,” said London Mayor Boris Johnson in 2009. “Bendy buses on other routes are on borrowed time and I can confirm that they will all have gone by 2011. Engineers will now scrape all traces of the capital from these buses and next week they will be sent to their spiritual home, an airfield in the Midlands.”

The traction of a double-decker in icy and snowy conditions is also superior to single-deck and articulated buses as their weight is concentrated over the driving wheels. For a tall vehicle, it also has a remarkably low centre of gravity – even when its upper deck is packed with maximum load and with no passengers in the lower deck.

Simpson credits the eye-catching and attractive appeal of a double-decker bus for consistently increasing ridership significantly, particularly when the two-level buses are brought in to replace articulated fleets. The upper deck in particular is quiet and comfortable and offers outstanding views for passengers.

“Sitting upstairs in a double deck provides a completely different perspective of the city landscape. You quite literally see things in a whole new way,” said Simpson. 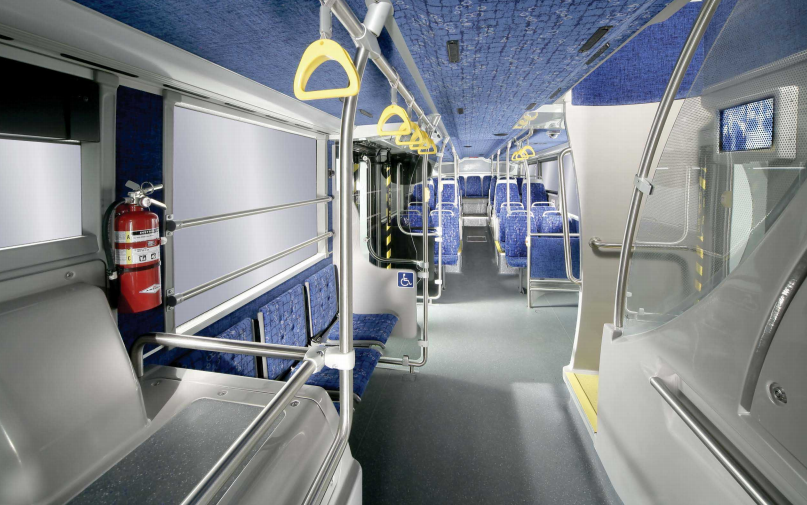 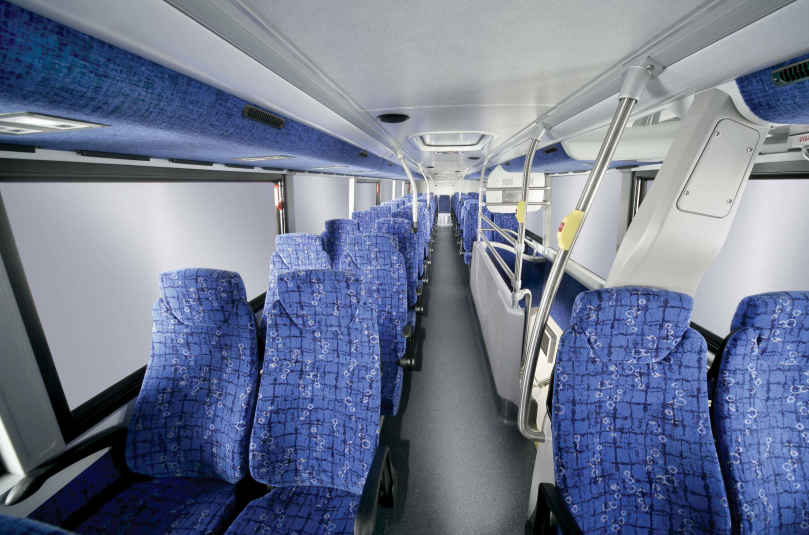 In 2001, nearby Victoria became the first North American city to introduce double-decker buses to its public transit fleet when it purchased 10 double-deckers from Alexander Dennis Limited. The buses were such a success that today, there are now 52 double-deckers in BC Transit’s Victoria fleet of 200 buses.

But don’t hold your breath for double-decker public transit buses traveling through the streets of Metro Vancouver. The challenge of bringing double-deckers to the Coast Mountain Bus Company’s fleet of buses lies not with cost (both articulated and double-decker buses cost the same, with a price tag of about $1-million each) but with low clearance issues.

Although in Victoria, the problem of low overpasses and tree branches is overcome by allowing double-deckers to travel on certain roads while strictly banning them from others that are problematic to go under.

A low 4.54-metre clearance for the Blundell Road overpass on Highway 99 in Richmond.

Double-decker buses were last previously tested by TransLink in 2008 on local routes within the highly urbanized areas of Vancouver and Burnaby where many arterial streets are lined with trolley wires (electric lines that power trolley buses) totalling nearly 300-kms in length.

A double-decker travels under the Metrotown bus loop’s trolley wires – next to SkyTrain’s Metrotown Station. 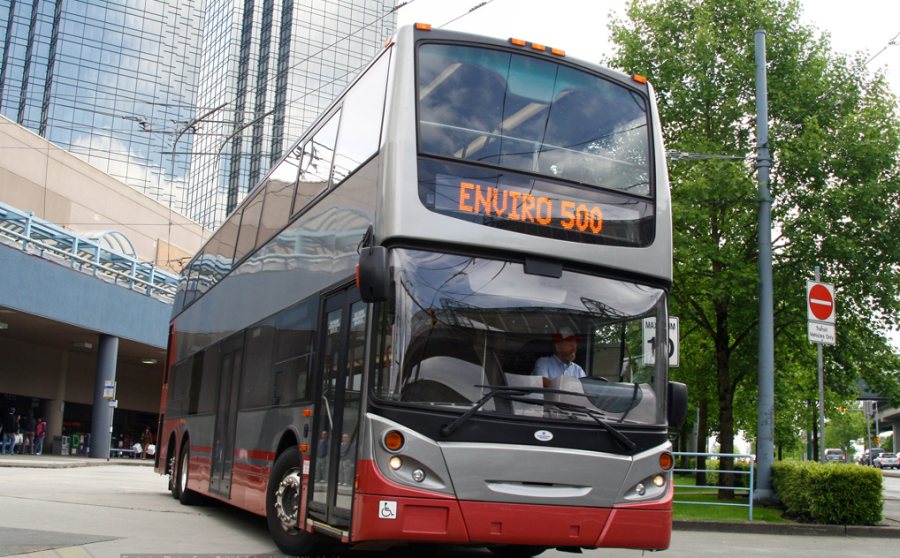 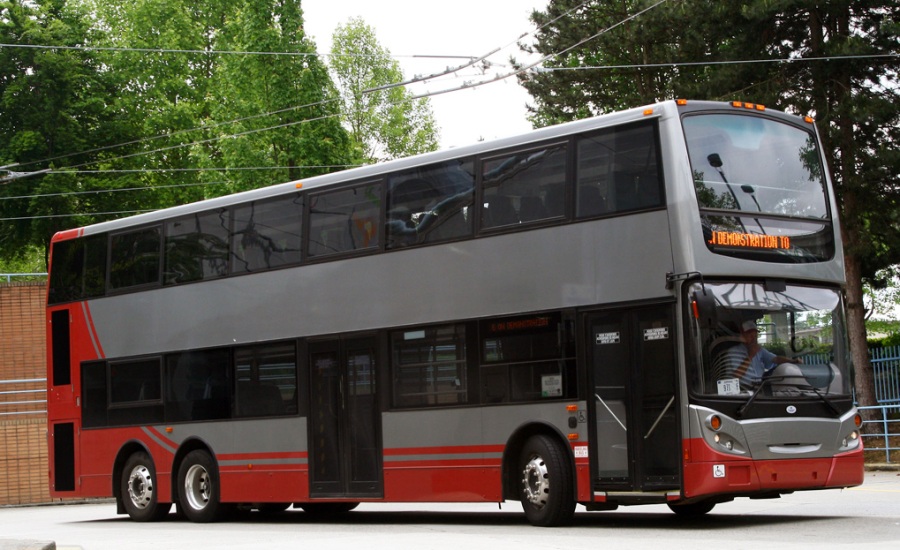 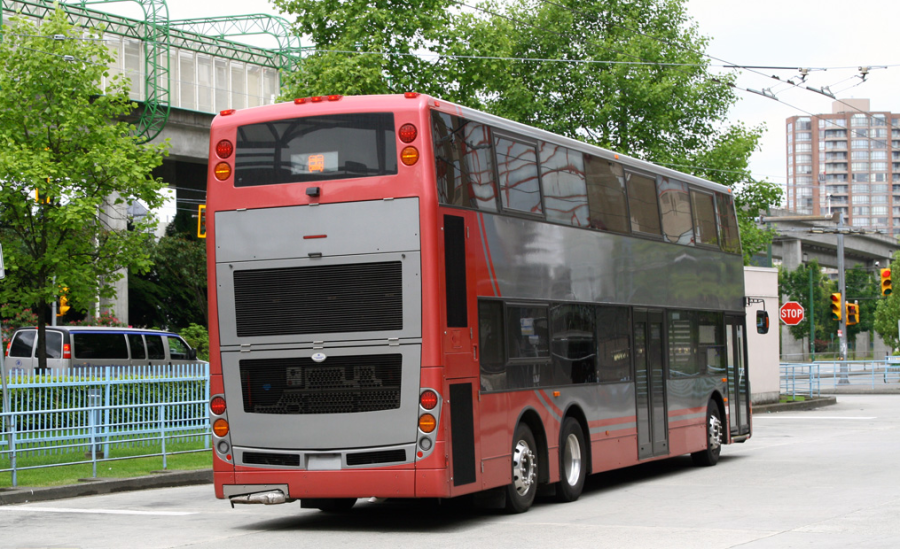 Such vehicles are perhaps most ideal for long-distance routes like the TrainBus coach that operates outside of the West Coast Express’ train service hours.

In areas where city blocks are short and bus stops are frequent, passenger movement within a crowded double-decker may be less efficient given the hassle of going up and down the stairs of a moving bus after relatively short travel distances (it could also be a greater hazard during rainfall when bus floors become slippery and wet). The single-level design of articulate buses could be more efficient for passengers to board and disembark within Metro Vancouver’s highly urbanized areas.

When it comes to accessibility for the disabled and elderly, double-deckers are no different from articulated buses in that the space and seats near the driver (front of the bus) are prioritized on a courtesy basis for these individuals. Where passenger safety might particularly differentiate with articulate buses is the driver’s limited visibility to what occurs in the upper deck of a double-decker.

But there are more reasons that explain why TransLink has not chosen the double-decker as one of the vehicle types for its expansive fleet, besides the reasons that include the existing operation of similar capacity articulated buses as well as the performance of double-deckers both inside the bus on a passenger experience level and as a vehicle on the road with low clearance.

“When deciding on what kinds of bus to use, we consider many factors. These factors include, but are not limited to, current fleet, infrastructure, maintenance needs, storage and upkeep as well as cost,” said a TransLink spokesperson. “Introducing double-decker buses to our fleet would require new maintenance and operational training for all staff as well as new storage and upkeep facilities… For these reasons, introducing double decker buses is not feasible at this time.”

BC Transit’s double-decker buses in Victoria 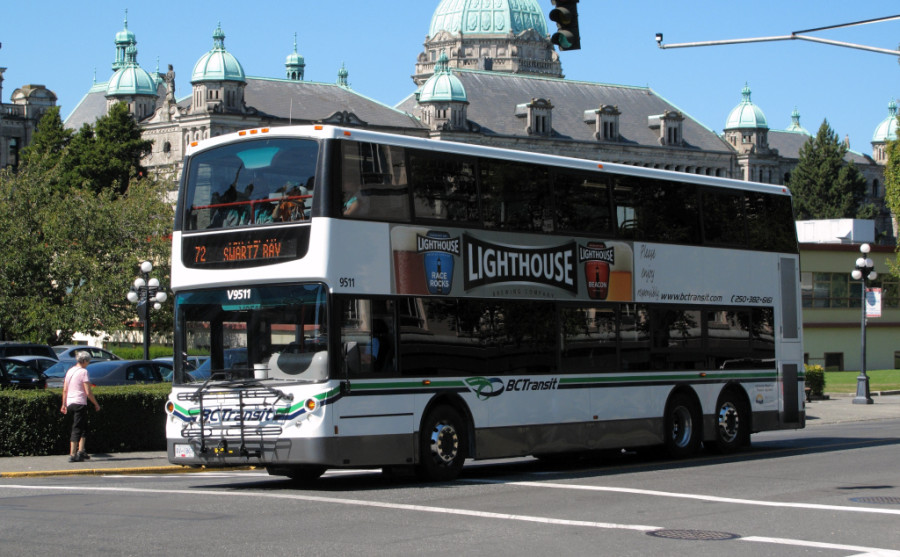 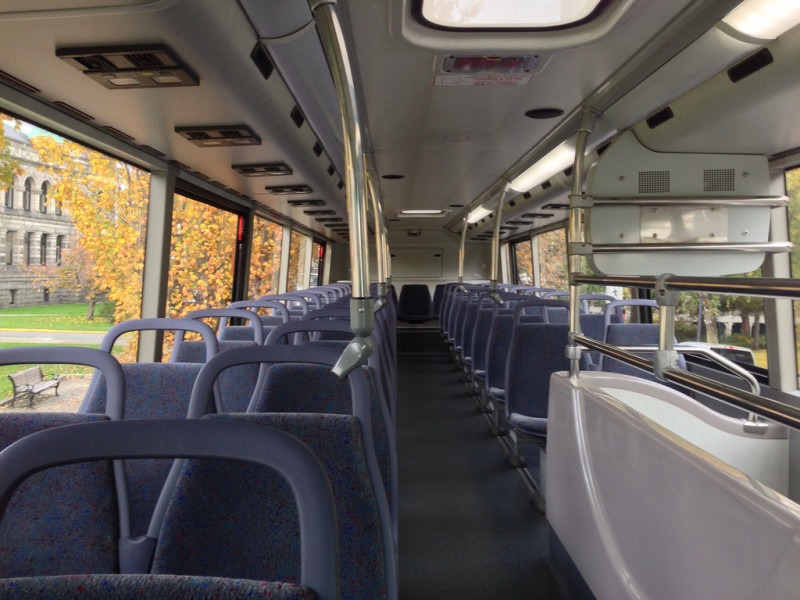 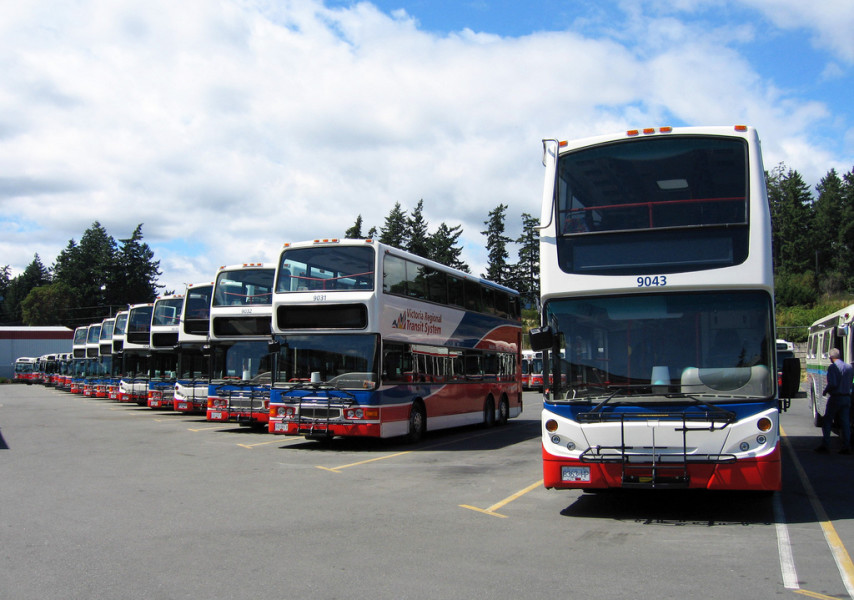