Deep into the night of the devil’s yearly glorification is the annual massive Dooms Night reaching its 11th anniversary! The most anticipated Halloween party continues as a two-day festival. Solid Events is excited to announce the biggest lineup assembled to grace the decks of Dooms Night.

Headlining on Day 1 is Martin Garrix. This phenomenal young super star has numerous #1 hits with his first mega hit release `Animals’ reaching Platinum in charts around the globe. Martin Garrix is currently the most sought out act in the world. Bound to be one of the future biggest stars and we are honoured to have him make his first ever Vancouver appearance. The star-studded lineup doesn’t stop here as returning on the main stage will feature #1 World Hardstyle artist Headhunterz with mega house stars Madeon, Bassjackers, and Jay Hardway.

Day 2 will feature Dash Berlin‘s return to Vancouver. Fresh off the heels of his latest Album release “We Are”. With countless #1 songs and endless classics we are honoured to have his presence yet again with all of us here at Dooms Night. The Halloween extravaganza will have trance super star Audien, and the most sought out Hardstyle artist Audiofreq alongside house stars Dubvision and Mike Hawkins.

Expect the biggest production ever for this iconic Halloween event. Get your scariest and most scandalous suits on. Dance with over 6500+ alongside the world’s hottest and biggest DJs, live. You are all in for a treat! Prepare to be enamored as this is the legendary Dooms Night. 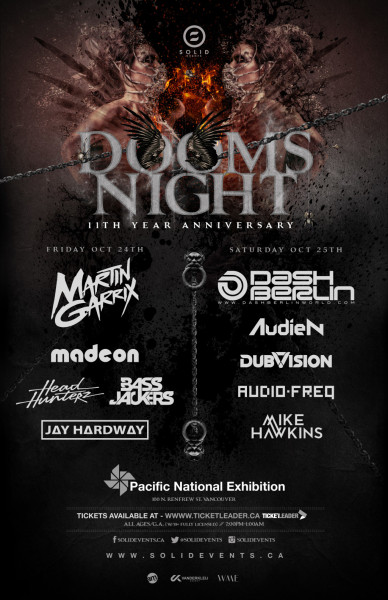