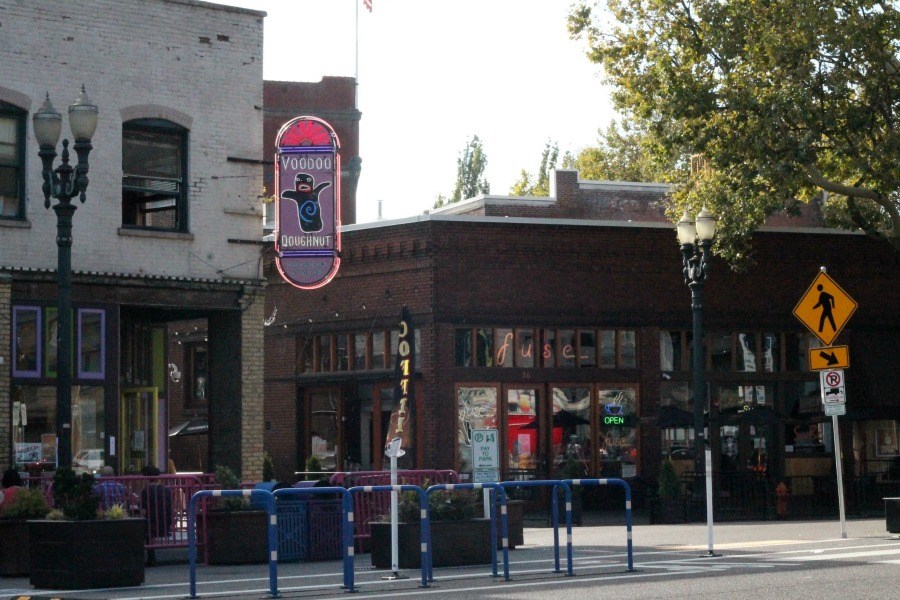 It’s a word Kenneth “Cat Daddy” Pogson, co-owner of Voodoo Doughnuts in Portland, uses about five times over in our nine minute conversation.

Being an avid donut (or doughnut) enthusiast, I’ve heard Portland is home to loads of great donut shops, and I’m here to experience them.

No story about Portland donuts would be complete without a trip to Voodoo Doughnuts. Opened 13 years ago in downtown Portland, it remains their flagship location, though they have expanded the space since then. This summer, they open their sixth location.

Voodoo can pump out a staggering 20,000 donuts per day, and they can sell out in the busy summer months.

They are best known for their kooky flavours, like the Memphis Mafia (fried dough with banana chunks and cinnamon covered in a glaze with chocolate frosting, peanut butter, peanuts and chocolate chips on top), or the Tangfastic (plain cake doughnut with vanilla frosting, tang and three marshmallows). Breakfast cereal plays heavily into toppings. 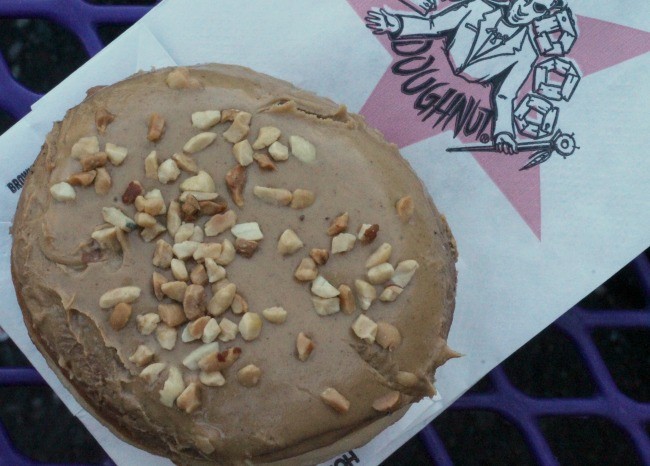 When I quiz him about why he thinks Voodoo has been so successful, Cat Daddy is grateful, but not entirely sure of the answer: “It’s weird. It’s something we deliberately tried to do, but can I explain how we did it? No.”

They knew they could get the Portland crowd in. But they also knew “if we were going to go somewhere, we had to figure out how to get people off the plane and come by. I remember a couple months later [after opening], I saw a guy heading to the airport with his roller bag and a dozen of our donuts.” Voodoo Doughnuts was on the culinary map.

In the ensuing 13 years, Voodoo has created a formula for success, balancing the popular crowd-pleasing favourites with wacky new inventions.

“You have to create,” Cat Daddy reiterates, “but you also have to ride what’s good. We’ve had flukes that turned into a solid thing, and flops that we’ve put a ton of energy into.”

And what kind of donut does the owner of Voodoo Douhgnuts go for when he has a craving? “I’m an O

ld Fashioned man,” he grins. “It was the first one I ever made, and it won me over. It’s soft and crunchy, you have to mix it right, and cooking is all to the eye. It’s the one that just gets me now.”

If you want to make a donut pilgrimage of your own to Portland, be sure to visit Voodoo Doughnuts at 22 SW 3rd Avenue. But there are lots of other donuts as well, showcasing a mind-boggling variety in Portland. Listed below are three other donut shops in Portland, and their Vancouver equivalents, so you can decide which ones you want to try (unless you want to try them all like I did!). Challenge accepted! 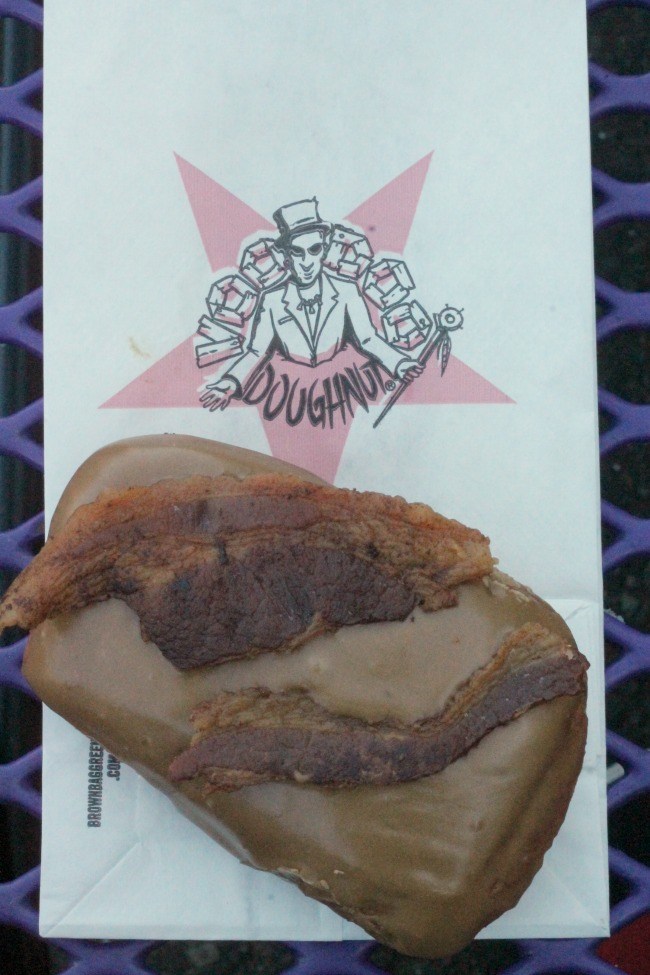 Known for their crazy combinations (though they no longer serve the Pept0-Bismol or the Nyquil donuts), go early to avoid lineups. Also, please note that Voodoo accepts cash only. They have vegan options, but not gluten-free.

Voodoo makes very traditional donuts. There are a mix of yeast and cake donuts, but they tend to be thicker, a bit more dense than the average.

Try one of their outrageous selections, like Oh Captain, My Captain (topped with Cap’n Crunch) or one of their seasonal selections. This is not the place to count calories–get a little crazy! 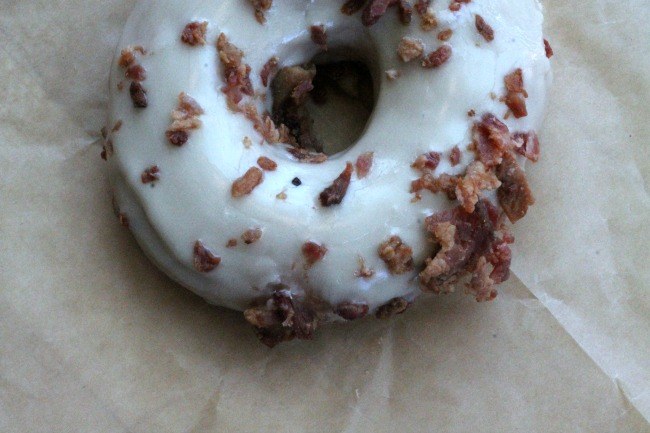 Blue Star is almost the opposite of Voodoo. The design is sleek, modern and spare, lots of light, lots of white, high ceilings. The donut flavors are much more sophisticated, and less playful. This place is very, very serious about donuts.

The dough here is brioche-based, and you’ll find some gourmet flavors, like the blueberry basil, which is their best seller. They also have vegan selections. 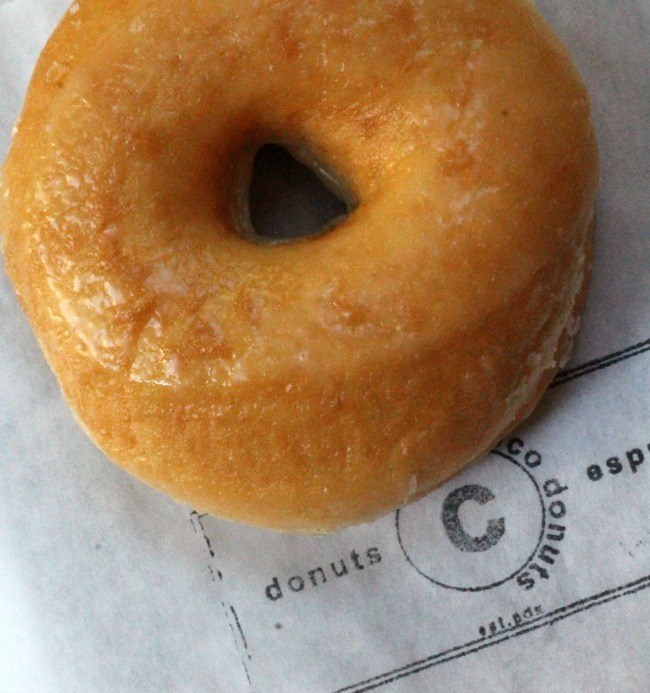 This was, hands down, my favourite donut of the day. This is a classic donut, old fashioned, old-school and done so very right. We arrived around 11, and they were nearly sold out, so we “settled” for an old-fashioned glaze. It was amazing. Fluffy, light, but still with a nice toothsome bite. Not too sweet–it really was donut perfection. 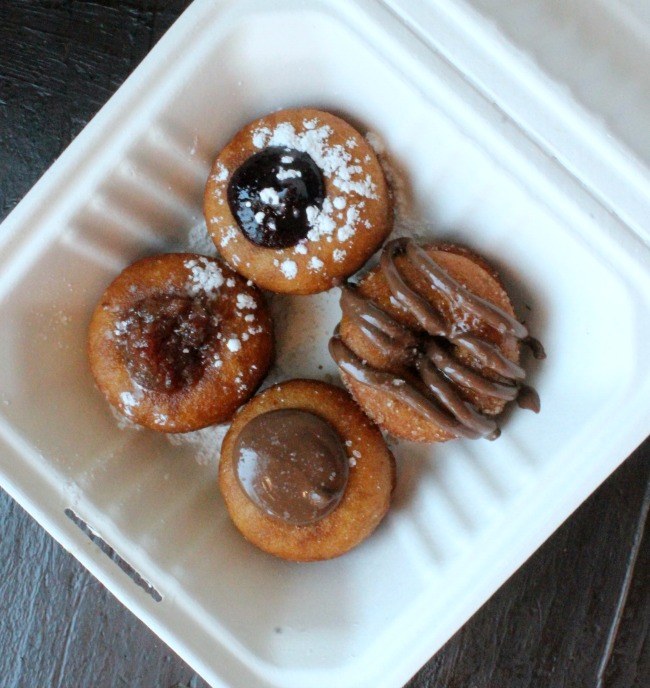 There are usually about 6 different flavours to choose from, and donuts are made hot to order. Choices include favourites like cinnamon sugar and Nutella, but also seasonal favourites. The day we were there, there was one filled with bacon jam, and another with a blueberry compote. They also have house-made chai in four flavours.