Drafted in the 2nd round of the 2009 NHL Entry Draft by former Canucks GM Mike Gillis, Anton Rodin had been forgotten about by most Canucks fans.

After two uninspiring seasons with the Canucks’ AHL farm team, Rodin returned to Sweden for the 2013-14. If you thought you’d never hear his name again after that, I don’t blame you.

Rodin has quickly returned to everyone’s radar after dominating the Swedish Hockey League for the better part of the last two years.

Rodin has 30 points (13-17-30) in 21 games with Brynas of the SHL this year and is currently 4th among forwards in average time-on-ice. He is also the captain for Brynas, which as a 25-year-old, is an impressive accomplishment.

Here’s what Sportsnet’s Elliotte Friedman had to say about the renewed interest in Rodin in his weekly can’t miss ’30 Thoughts’ column:

Hard to say how many potential European free agents can make an impact in North America, but there are at least two others who will be monitored in Finland. Both are Swedes.

One is Anton Rodin, an about-to-be-25-year-old forward drafted in 2009 by Vancouver. He played in the AHL, but couldn’t get a one-way contract and went home. (UPDATE: I had checked to see if Vancouver retained his rights and misunderstood the results. He is still Canucks property.)

As Elliotte mentioned, the Canucks do retain Rodin’s restricted free agent rights as they provided him with a qualifying offer in the summer of 2013 before he went back to the SHL.

The monitoring in Finland that Friedman is referring to is the Karjala Cup, which is a round robin tournament that includes Russia, Czech Republic, Finland and Sweden. Rodin ended up missing the majority of it due to a deep bruise (not a broken collarbone as originally reported) after being hit by a Czech player.

With all that being said, Rodin never missed any Swedish Hockey League games and continued his dominance by putting up a hat trick against Lulea this past weekend.

Rodin’s first goal is a great indication that he’s maturing as a hockey player, as you can see above. Watch as he battles in front of the net to get multiple chances before eventually putting it past the goalie. A criticism of Rodin’s game was that he played the game on the ‘softer’ side, so battling in front is a great sign that may help in his transition back to North America.

His third goal (above) was a very well placed shot while using the defender as a screen. His second goal was almost identical in its placement in the top corner.

J.D. Burke over at Canucks Army did a fantastic job before the season breaking down why the Canucks should bring back Rodin. Rodin has increased his production over last year from 0.74 points per game to 1.43 PPG, thus J.D.’s pre-season arguments are reinforced with the young Swede taking his game to another level. 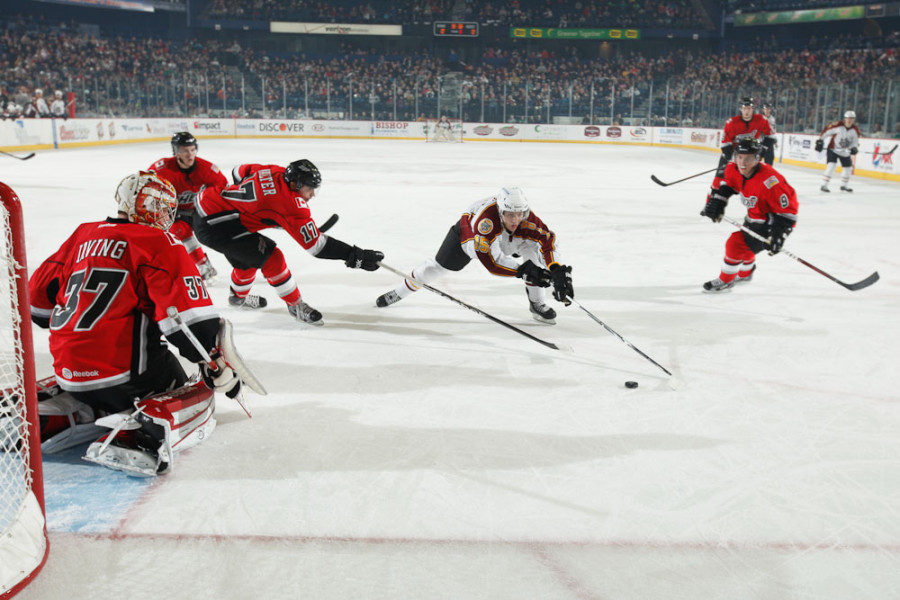 Rodin struggled in the AHL the first time around, which was due in part to multiple injuries and the lack of talent around him. His highest point total in the AHL was 27 points (10-17-27) in 62 games during the 2011-12 season.

Despite unimpressive point totals, I’ve always been a fan of Rodin’s game and felt that if he hadn’t suffered injuries early on, and gained some confidence, it may have clicked for him in North America the way it has in Sweden.

Although the Canucks prospect pool has increased immensely over the last couple of years, it still lacks that finesse player who can distribute the puck to go along with a good shot to bury his own chances. The Canucks hoped that Sven Baertschi would be that player, but at this point it doesn’t seem like it. Maybe the slightly older and more experienced Anton Rodin is the answer.

For a team like the Canucks, a player like Rodin is ‘found money’ that they can’t waste. If they feel he doesn’t fit into their long term plans, there should be enough interest in the SHL’s leading scorer to recoup a draft pick.

The Canucks are in a transition phase where a 25-year-old Rodin should fit perfectly into the retooling. At the very least, he’s earned a shot.